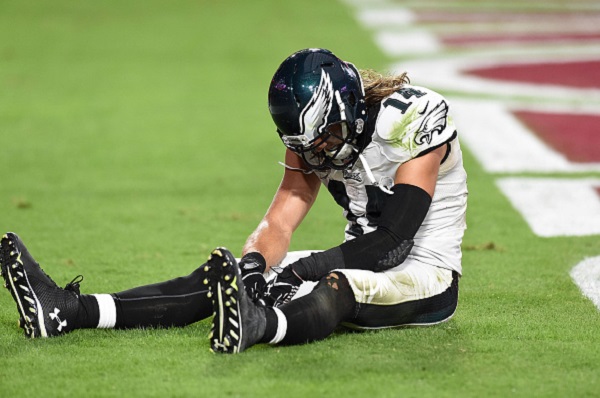 Typically, mistakes are sports team calendars are relatively innocent. For instance, including a picture of a player who was traded the previous season.

As embarrassing as these gaffes can be, the teams themselves often have nothing to do with the errors. The work is usually outsourced to a separate vendor or supplier and the club doesn’t see the final result until it’s too late. (Remember Troy Tulowitzki’s name being misspelled on giveaway jerseys last July?)

But sometimes, these mistakes are head-slappers that could have been avoided with just a little bit of thought applied to the exercise. The Philadelphia Eagles’ 2015 team calendar putting receiver Riley Cooper as the featured player for February — Black History Month — probably qualifies.

TMZ has the story and the photograph of the embarrassing oversight. The person or people in charge of deciding which player goes with which month must have forgot that Cooper was filmed making a racist remark at a country music concert nearly two years ago. Cooper was fined by the Eagles, issued a public apology and was enrolled in sensitivity training for his comments.

A Google search turned that information up rather quickly. Maybe the company that makes the Eagles team calendars in the future can do a quick web search on each player before deciding where — or even if — he should be placed on such promotional material.

In this case, it’s not like the calendar was produced after a player was traded or released, or decided to retire. The story with Cooper is something that still applies. Had the Eagles played a more active role in the production of this calendar, perhaps this issue would have been caught before going to press. As it stands, however, the team said it had no idea what was going on and no say whatsoever in what was printed.

The guess here is that the Eagles and all other NFL teams, given what transpired throughout the league off the field this past season, will be making sure to review all such products and materials released to the public.

It is intriguing, however, that the embarrassment of pairing a picture of Cooper with Black History Month wasn’t noticed sooner. Maybe no one — at least anyone with a prominent social media account — bothered to open those Eagles calendars until they needed to be used.

Social media is weird. It’s Feb 12. Eagles calendar out for months. Story should be “took people this long to make a Riley Cooper joke.”