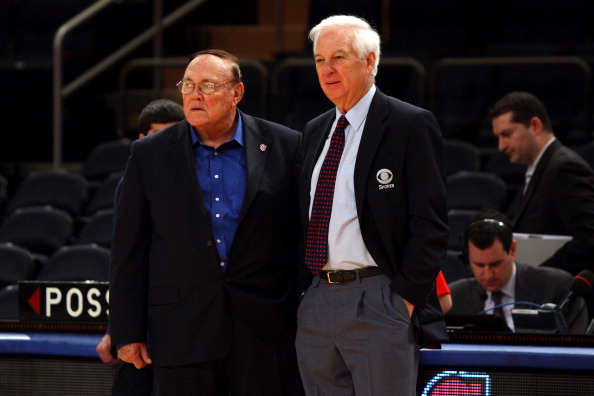 For the second time in as many years, CBS and Turner Sports will be making a change to their Final Four broadcast crew at the analyst position.  Last year the networks made the decision to swap lead analysts Clark Kellogg and Greg Anthony, moving the latter to the broadcast booth and the former back to the studio.  However, this year, the decision of who will partner Jim Nantz will be enforced by outside circumstances for two verrrrrrry different reasons.  Steve Kerr left the broadcast booth and is now coaching the team with the best record in the NBA, the Golden State Warriors.  Greg Anthony got suspended indefinitely after getting arrested for soliciting prostitutes.  I think Kerr got the better end of that deal by just a bit.

CBS has already said publicly Anthony will not return to the network this season, which means he’s out for the NCAA Tournament and the Final Four.  It’s highly unlikely Anthony returns after that time is up given the embarrassment brought to himself and his employers via the nature of the situation at hand.  However, attention will naturally turn to how CBS and Turner might move forward for March Madness this year.  Losing one of your top analysts is one thing, but losing both is a very unique situation.

The sentimental choice is obvious – Bill Raftery.  He’s been one of the most beloved individuals working in sports television for many years but has never had the opportunity to call a Final Four on television with CBS.  (Call it the Billy Packer conundrum, Raftery has called the Final Four many times on radio.)  And at 71 years of age, the opportunities might be growing slim for Raft to call a Final Four.  If there was ever a time to make a feel-good broadcasting assignment, this is it.

Now, partnering Raftery with Jim Nantz would require some other shifting amongst the NCAA Tournament announcing ranks and breaking up Raft’s longtime team with Verne Lundquist.  However, the depth of analysts at CBS and Turner Sports is more than enough to move someone like Grant Hill or Steve Smith into the rotation or promote Ian Eagle and Jim Spanarkel to the second weekend.

While that’s what we might want CBS/Turner to do, it’s probably not what CBS/Turner will do.

The likely choice is also fairly obvious – Clark Kellogg.  Not only does Kellogg have the experience of calling multiple Final Fours with Nantz, it’s the path of least resistance.  Kellogg can simply shift back from the studio to the booth and leave the halftime work to Kenny Smith, Charles Barkley and co.  Then CBS and Turner don’t have to alter any of their other broadcast pairings.  Kellogg is the ultimate safe pick for a network that is notably conservative in their decision making.  Although he might be a better fit for the studio, there’s few analysts that are more likable from a personality standpoint working today.

What I’d like for the networks to do?  Choose both options, of course.  There’s no reason why CBS/Turner can’t give Clark Kellogg the #1 analyst job again while not also rewarding Bill Raftery’s work over the course of his career with a Final Four spot.  A three man booth of Nantz, Kellogg, and Raftery would represent the best of all worlds.  There’s just one slight wrinkle though.  Turner might want one of “their” guys in the booth for the Final Four with both semifinal games on TBS once again this year.  If that’s the case, it could be Kellogg paired with anyone from Reggie Miller to Grant Hill.  Nevertheless, at least for this year, it’d be best for everyone involved for CBS and Turner to give Bill Raftery the opportunity he has long deserved.  No matter who else is sitting with him come April, one chair at the broadcast table in Indianapolis needs to be marked for Raft.