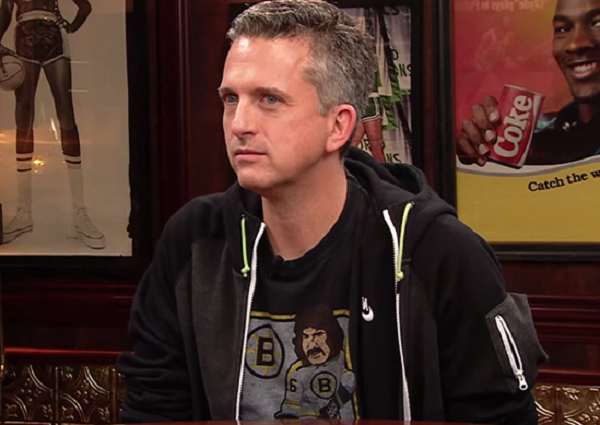 The new era of Bill Simmons begins next week, with the debut of his new podcast on Thursday, Oct. 1. But other than that premiere date, not much else about the show was known, other than the solid assumption that it wouldn’t be called “The B.S. Report,” the title of his former podcast with ESPN.

However, a few details have now been revealed, thanks to the Boston Globe‘s Chad Finn. (Hat tip to our friend Ed Sherman.) What will the new show be called? The title pretty much says it all: The Bill Simmons Podcast. It says what the show is and who will be on it; no ambiguity there. OK, Finn has much more than that:

“The podcast will be called The Bill Simmons Podcast rather than the B.S. Report. It will return Oct. 1 with two podcasts, then two more will be available Oct. 2. After that, three podcasts per week will be produced in the first six months. It will be found in the usual places initially – iTunes, SoundCloud, Stitcher, Spotify, and so on – and a specific web page will eventually be created as a landing spot.

The content will be familiar to his regular listeners, with the Guess The Lines podcast with Cousin Sal available on Mondays. There will be an NFL picks-focused podcast on Fridays, with Simmons’s friend Joe House, a familiar guest on the ESPN version of the podcast. Media members and celebrity guests will appear on other podcasts.”

Why mess with a good thing, right? Simmons’ podcast was enormously popular, so fans would expect something very similar. Same show, different network, or something like that. Naturally, there will be some question as to which media members will be allowed to appear with Simmons now that he’s no longer with ESPN. One of the examples Finn mentions is Zach Lowe, the Grantland NBA writer who was a frequent guest on The B.S. Report.

ESPN has prevented talent from appearing on non-network shows in the past. For example, when Tony Kornheiser’s radio show was on WTWP in Washington, D.C. from 2007-08, before moving over to ESPN affiliate WTEM, guests such as Tim Kurkjian weren’t allowed to make appearances. But a spokesperson told Finn that the network would consider requests from Simmons for ESPN personalities “on a case-by-case basis.” Hopefully, ESPN behaves a bit more magnanimously here.

After five months of no podcast or column, Simmons presumably has plenty to say — besides the bombs he’s been dropping on Twitter, of course. So we’ll get four new podcasts from Simmons next week. It’s almost like Netflix making an entire season of a show like House of Cards or Daredevil available on a Friday, enticing us to binge over a weekend.

Next week, we’ll have a few Simmons podcasts to binge on. Plan a road trip, yard work or a lot of exercise. During at least one of those shows, he hopefully reveals where his column will eventually be found, perhaps a new website (or the one where his podcast will be hosted).

Random things I’m excited about starting next month, vol. 24: finally being able to go on Mike Francesa’s show. This will be yuuuuuuge. — Bill Simmons (@BillSimmons) September 25, 2015

UPDATE: You can get a head start on subscribing to Simmons’ new podcast on Soundcloud and iTunes.