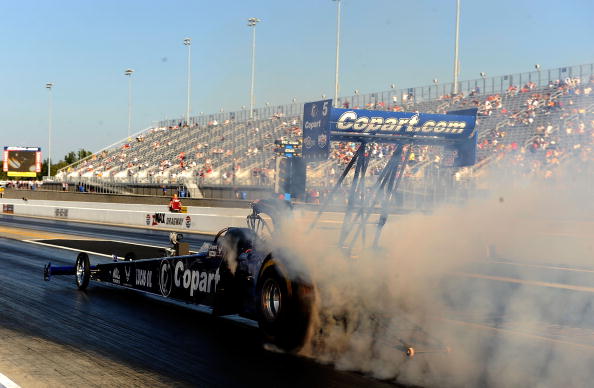 ESPN loves to portray themselves as “The Worldwide Leader In Sports” (heck, it’s the subtitle of ESPN.com), but motorsports fans may particularly disagree, as Bristol will have no regular motorsports programming at all next year now that the National Hot Rod Association has confirmed it’s ending its relationship with ESPN after this year (a year earlier than initially scheduled, and one that comes after 15 years of working with the WWL) and moving to a “long-term” deal with Fox. That adds to Fox’s considerable stable of motorsports programming (the NHRA release cites them as “already the home to high-profile races in NASCAR, Monster Energy Supercross, the FIM MotoGP World Championship, the TUDOR United SportsCar Championship, the FIA World Endurance Championship, the 24 Hours of Le Mans and the fully electric FIA Formula E Championship, among others”), and it shows they’re taking a similar path to NBCSN (which has found great success with motorsports, including winning the night in overall viewers Friday with NASCAR’s Xfinity Series). So, ESPN’s primary competitors are embracing motorsports, while the WWL is moving away from them, and the NHRA move is just the latest on that front. How will this work out for everyone involved?

For the NHRA, and other racing organizations like NASCAR that have left ESPN, there are some definite benefits to being on other networks. One is that Fox and NBC are quite eager for live events, and that may lead to higher rights fees (especially considering the current wave of cost-cutting in Bristol). Another is that the newness and exclusivity of these events encourages the networks to promote them (especially at the start), and perhaps even more importantly along those lines, there are less other sports at Fox and NBC for these racing organizations to compete with. It’s similar to how the NHL and Premier League are having success on NBCSN; they’ve gone from being sports somewhat lost in the crowd to sports that are a big focus for their network. That looks like it will be happening with the NHRA as well, with a minimum of 16 Sunday eliminations presented live (four on Fox’s broadcast network and the rest on FS1) and plenty of other coverage of eliminations, plus Friday and Saturday qualifying. Achieving more (and more timely; NHRA broadcasts have often run into scheduling issues on ESPN) TV coverage sounds like the organization’s goal with this move, as judged by president Peter Clifford’s comments in their release:

This really is a game-changer for NHRA regarding the presentation of our marquee product, the NHRA Mello Yello Drag Racing Series,” said Peter Clifford, NHRA president. “FOX Sports promises to be just the right media partner we’ve been looking for to help give our professional series the stage it deserves and to provide our passionate fans the timely, quality coverage they are craving.”

However, this is a double-edged sword to some degree. While it can be useful to be a big fish in a small pond, the reach of a big-pond network like ESPN can also be useful. NBCSN and Fox Sports 1 are getting closer and closer to ESPN when it comes to live event programming, but the Worldwide Leader still dominates the studio show ratings, and lots of lesser-known sports (such as poker, the Pan Am Games and the Canadian Football League) are getting some attention thanks to just being on ESPN networks. Moving away from ESPN may help the NHRA get more attention from Fox than they did from ESPN, but it may not be wholly positive.

As for the competing motorsports programming strategies in general, it seems like both of them could work. For NBC and Fox, investing heavily in motorsports (and a variety of different motorsports events) can be a way to build a brand identity and a fanbase, and if they deliver good coverage (as NBC in particular has been praised for with their handling of NASCAR so far) and substantial promotion (as both have done, sometimes even together), they may gain and keep lots of loyal fans. For ESPN, it probably makes more sense to be out of regular motorsports coverage entirely than to have one or two events that don’t really fit with the rest of their programming lineup, especially if they would have had to pay big for them.

This is further evidence that the “Worldwide Leader” era isn’t really around anymore, though. ESPN is still the top dog, but Fox and NBC are very legitimate challengers, especially when it comes to live programming, and they’re viable destinations for organizations like the NHRA annoyed with ESPN’s coverage. There are alternatives out there for sports leagues and for sports fans. For motorsports fans in particular, those alternatives may become a much more frequent destination than the Worldwide Leader in the years to come.