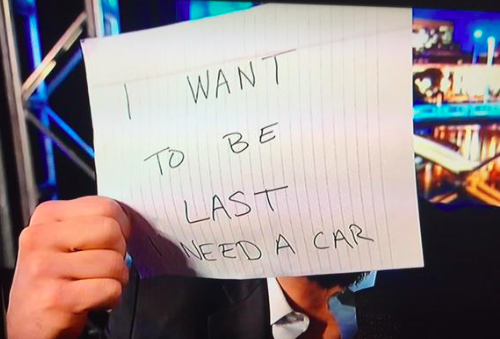 The typical pattern for a sports broadcast is engaging commentary from announcers and analysts, mixed with often dull-as-dishwater quotes from the athletes and/or coaches themselves when grabbed for an interview during a break in play. That was reversed in Friday night’s NHL All-Star Game Fantasy Draft, though, where the professional broadcasters couldn’t get out of their own way and provided a class in how not to conduct a TV event, but the athletes themselves managed to save the day and put on an entertaining show. From Alex Ovechkin campaigning to be picked last so he could win a car to Roberto Luongo discussing his hair gel to Phil Kessel being traded for Tyler Seguin again, all of Friday night’s best moments came from the players themselves, with next to no help from the broadcasters. If the NHL plans to continue with this format (two players selected as team captains, they then pick alternates and go on to choose the rosters for the all-star game) in years to come, they should remove the hosts and just let the players have fun with it.

As a television broadcast, the Fantasy Draft was painfully awkward, and a lot of that was on the broadcasters and the poor way they handled it. Hosts Daren Millard (of Canada’s Rogers Sportsnet) and Kathryn Tappen (of NHL Network) kept interrupting each other throughout the night, and Millard in particular made some cringe-worthy cracks, including accusing Tappen of “turning this into E!” after she asked a couple of players why they were wearing the same shoes. Moreover, their interviews with the players were, by and large, incredibly pointless. An early illustration of that came from Millard asking team captain Jonathan Toews how great the fans in Chicago were. What’s he going to say, “Nah, they’re not great?” It was the same principle as “Talk about” without using those dreaded words.

Another common question (which seemingly needed to be asked of every player when they were drafted, and usually when they were right in the middle of pulling on their new jersey) was “How much fun are you having this weekend?” Asking these kinds of questions is utterly pointless; the response is obvious and doesn’t tell us anything. Pierre McGuire’s backstage interviews with players waiting to be drafted weren’t much better, and they often fell into his typical trap of discussing the player’s complete junior hockey history.

On that front, the backstage setup was pretty pointless, too; shots of it mostly showed players standing around awkwardly, waiting for their name to be called. My wife came up with an easy way to potentially fix that for future drafts; fans are paying to sit in the audience for this, so why not have the players waiting to be selected seated with them? Let the fans get closer to the players, and let the players have some fun meeting fans instead of just standing and waiting. Alternatively, put all the players waiting to be selected on stage, so everyone can see their reactions when someone else is picked.

Fortunately, the night was redeemed by the players themselves. Lots of these guys know how to be entertaining and engaging with an audience, and they did a much better job of that than the professional broadcasters involved. Captains Toews and Nick Foligno were solid, assistants like Drew Doughty and Ryan Getzlaf contributed some impressive trolling, and many of the other players chipped in as well. Here’s Ovechkin (who posted selfies all night on Instagram, and even grabbed Vladimir Tarasenko for one once he was picked, delaying the broadcast) campaigning to be last so he can win the 2015 Honda Accord:

A video posted by Alexander Ovechkin (@aleksandrovechkinofficial) on Jan 23, 2015 at 6:06pm PST

Here’s the Seguin-Kessel trade (background on why that’s hilarious):

NHL director of player safety Patrick Burke (son of current Calgary Flames’ president of hockey operations Brian Burke, who was the Toronto Maple Leafs’ general manager who pulled the trigger on the first Kessel-Seguin trade) had a great response to this on Twitter:

Nick Foligno openly trolling our family at this point.

And Toews, who traded for Kessel, chimed in with a joke about Kessel’s supposed uncoachability:

Drew Doughty being caught on a live mike asking Foligno if he’s married (and Foligno’s expression) was also a highlight:

Thanks to the players (and the libations they were provided with), this wound up being a pretty entertaining show. If the NHL and NBC plan to televise it again, though, they should just get out of the way and let the players do this draft, encouraging the trolling back and forth and general sense of fun. The professional hockey players did a far better job of broadcasting than the professional broadcasters Friday.