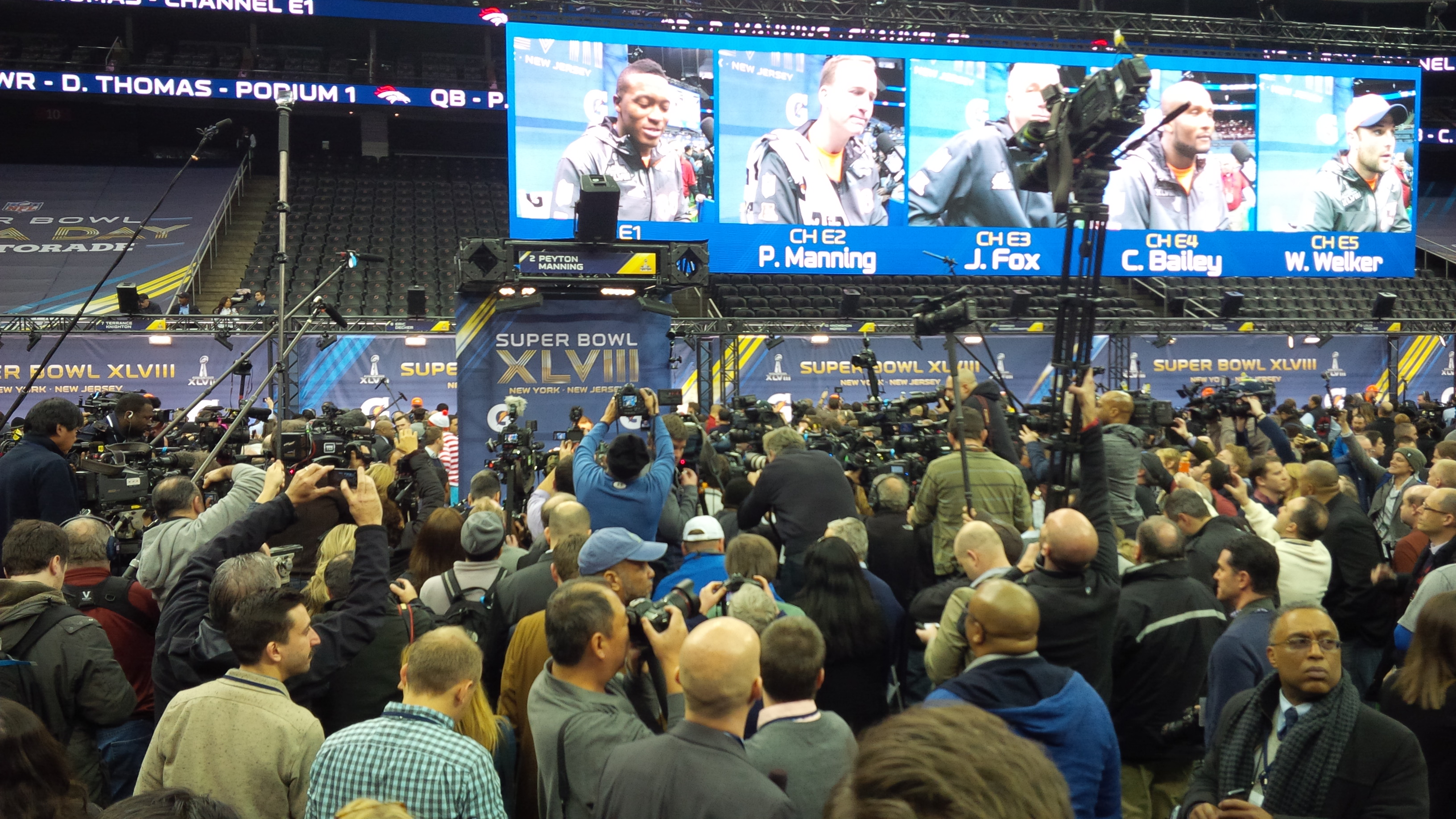 It’s the news Deion Sanders has been dreaming about for years.

Yes, per Fox Sports’ NFL insider Mike Garafolo, the league is kicking around the idea of moving Super Bowl media day—held every Tuesday before the big game—to primetime to maximize television exposure.

It’s a wonder they didn’t come to this decision sooner. Why has the NFL been wasting moments like this on the stuck-on-the-couch-at-noon crowd all these years?

Reading the responses to Garafolo’s tweet, the media seem to hate the idea, but from a logistical standpoint, moving the three hour event to primetime makes a lot of sense this season, as the Super Bowl is being played on the west coast, putting the start time for Media Day already into the early afternoon in the east.

If the league has no choice but to start an event at three o’clock in the east anyway, why not just wait another four hours, put the thing on at 4 p.m. PT and get a little primetime bump out of half the country getting home to watch the hilarity ensue?

Oh, and it will ensue. Media Day at the Super Bowl has become less about the NFL providing a day for the actual media and more about the NFL creating a fishbowl atmosphere for the fans to see just how many different types of media love to cover the league.

A few years ago the NFL made the decision to move Media Day from the stadium where the game is being held to a smaller, indoor arena nearby. When the game was in New Jersey, moving Media Day to Newark’s Prudential Center made logistical sense for all involved. (Note: it was very cold that day.)

A byproduct of the indoor venue is that the league can put more fish in a smaller bowl—think shopping mall department store on Black Friday, and Russell Wilson the Tickle Me Elmo doll every parent needs to buy—which makes the fervor and buzz around Media Day more of a spectacle for the fans watching at home, and those in attendance.

Yes, for a few years the NFL has invited fans to Media Day, outfitting them with earpieces they can use to flip channels and listen to each of the top players during the interview sessions. It’s actually easier to hear the players answers using the NFL’s fan headset than it is standing under their personal gazebos waiting to ask a question.

With that in mind, moving the event into primetime would give more fans a direct window into the event, and a direct pipeline to the players through the league-run network. Why read about Media Day in the newspaper when you can get home in time to watch it after work?

Expect more Media Days to be in primetime, and expect all of them to stay at indoor venues, like the SAP Center in San Jose, which looks to be the logical host of this season’s event, per Mark Purdy of the Mercury News.

With player and coach availability on two separate occasions after Media Day, the entire reason for having the event has become purposefully marginalized by the league.

Last season Marshawn Lynch only came to Media Day so he wouldn’t get fined, which made national news. The next day he had another standoff with the media, telling them “you know why I’m here,” and saying little, if anything else.

It wasn’t until the third media availability in as many days he was contractually obligated to attend where he actually spoke.

Speaking of Lynch, my favorite Media Day story every came two years ago before the Lynch and the Seattle Seahawks beat Peyton Manning and the Denver Broncos in Super Bowl XLVIII.

Hoping to talk to Lynch (before he did his interview with Sanders and ducked out) and excited to write about the spectacle of Richard Sherman’s amazing media session, I caught an early train to Newark and walked through the cold to the Prudential Center.

Having beaten the working press to the arena by about an 90 minutes (I said it was an early train) I looked to secure an area in the media work room. There wasn’t one.

I don’t mean there wasn’t an area for me. There wasn’t a workroom for the media. On Super Bowl Media Day. When I then inquired about a wireless password, I was told there wasn’t one.

On Super Bowl Media Day, the NFL did not provide a workroom or access to the internet… for the media.

After 30 minutes and three people on the case, I was able to find a password for the facility I shared with colleagues as they arrived. Other media did their own sleuthing and found ways to get online as well. A few of us sneaked into the New Jersey Devils media workroom to write. (The existence of that room stayed on a need to know basis.)

@RapSheet @MikeGarafolo Might as well broadcast all the writers who will now be scrambling on deadline too.

The NFL did set up a huge lunch for those in attendance that day—a fed press corps is a happy press corps—and gave us access to all the NFL Network analysts for interviews and, I’m assuming, autographs if we were so inclined to ask. There was no internet, or power, but there was a dedicated table for Warren Sapp.

Again, it’s amazing the event hasn’t been in primetime for years.

When news like this leaks out, it’s important to remember what Media Day is at this point. It’s another day for the NFL to show its fans how many people care. What they care about—or at least what they write about—hasn’t mattered for a while.