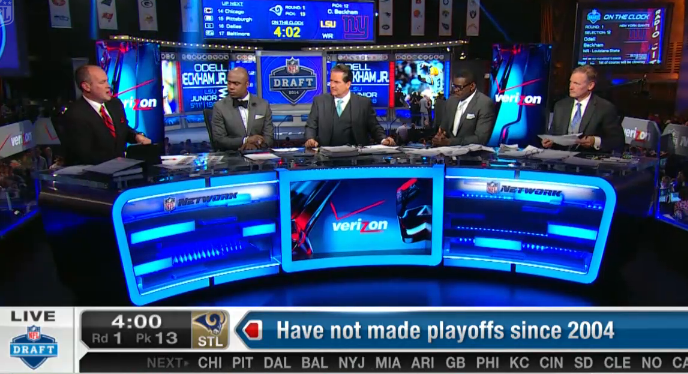 In recent years, the NFL has mandated that the networks covering the draft, ESPN and NFL Network, ensure their reporters did not tip picks and spoil the proceedings by tweeting out information before it aired on television.

The inner conflict present regarding the draft is one of the toughest to crack in sports media.  Of course the NFL and its television partners televising the draft want to preserve the drama of the event by not spoiling the picks as they happen.  Fans, by and large, want this as well.  You wouldn’t want to watch a basketball game knowing every shot that was made and missed ahead of time.  And yet, it’s the job of the reporters at all these companies (and the goal of the networks as a whole) to get news and break stories and they’re basically told during these three days of the year, “don’t do your job.”

In years past, CBS’s Jason La Canfora emerged as the top pick tipper on Twitter, which earned him quite a bit of hateful social media abuse.  However, that will not be the case this year.  The NFL has instructed all of its broadcast partners (CBS, Fox, and NBC included) not to spoil picks this year according to a memo obtained by The Big Lead.  And when the NFL asks its broadcast partners for a favor, the networks that are paying it billions of dollars to televise its games usually listen.

We believe that keeping this information embargoed to the extent possible clearly enhances the viewer experience for the Draft.  The result is a better presentation for the 32 million viewers who watched Round 1 in 2014 and the 45.7 million who watched across all three days.

As network partners of the NFL, we encourage and appreciate your coverage of the Draft in Chicago this year and ask for your cooperation with this approach.  Please have your reporters and other personnel refrain from revealing picks on social media or other platforms before they are announced in the Draft broadcasts.

Rich Eisen also noted that the league’s television partners were instructed to not tip picks in a recent Q&A with our Brad Gagnon:

There were a couple times in the last two years where there were [presentations on stage] and the commissioner had three draft picks at the podium to announce. We were four teams off, which means there were three other picks that had been announced on Twitter essentially by reporters. And it makes us look like we’re behind the times. Twitter is a far more immediate method of reporting than television for the draft now. Far more, which is why the league has requested that NFL Network and ESPN and any television partner of the NFL cease and desist of having their information people tweet out. Because it undercuts the draft as a television product.

And interestingly enough, Richard Deitsch revealed on Monday that La Canfora wouldn’t be live tweeting the draft as he had done in years past and would be doing an online show instead.  One would imagine his live tweeting restrictions would be a major reason why.

You can understand where the NFL is coming from here, but it’s disappointing to see journalists and reporters being told that they can’t do their job.  Especially at a network that doesn’t have draft rights, it’s difficult to see how the NFL can tell the likes of Fox, CBS, and NBC what is and isn’t acceptable coverage for an event they don’t even televise.

As hard as the league might try to prevent spoiling draft picks, you know somebody out there will do it.  And it will get retweeted and shared across social media.  Whether it be a rogue exec, or a reporter from an online outlet like Yahoo or Bleacher Report or even a guy who knows a guy… there’s going to be someone tipping picks and causing a ruckus Thursday night.  And if anything, the lack of competition from major outlets will only help those non-NFL rightsholders make news during the draft.