It’s January 2015 and the NFL has finally done something that has been done plenty of times by teens looking to be silly and make a quick buck. The league has partnered with Youtube to create an account featuring highlights from across the league.

The National Football League (NFL) and YouTube today announced a partnership that will deliver NFL content to fans around the world, combining the world’s most popular sports league with the world’s largest video platform. Through a newly launched official NFL channel on YouTube, and video directly viewable for Google Search users, this partnership will enable fans to engage with NFL video content on PCs, tablets, and mobile phones.

This deal represents the latest in a series of partnerships that the NFL has struck with leading digital platforms to continue to increase the accessibility and consumption of some of the most valuable content in the entertainment business.

Additionally, official NFL game highlights and content will be available through Google Search. A simple Google search will display official NFL video along with related news and information all delivered to the user in one distinct box at the top of the search results. Kickoff time and broadcast information for every NFL game will also be prominently displayed in Google Search.

In recent years, the NFL has replaced MLB as the sports league most hostile to fans with their video sharing policy.  If you tried to search for an NFL highlight, it was nearly impossible. Now, it’ll be easy to get that done and share it with your friends and readers on your blog.

Or not. The Wall Street Journal is reporting that the videos on the NFL’s Youtube page won’t be embeddable, because the league still wants control of its content.

The NFL isn’t exactly letting its valuable content run freely all over the Web. In fact, unlike most YouTube videos, other websites won’t be able to embed clips from the NFL channel. “We like to control where our content goes,” said Mr. Schroeder.

When you try to embed a video, here’s what happens. 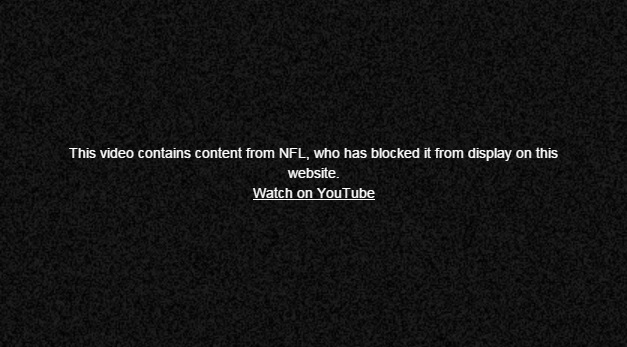 Also, there won’t be any archival footage on the NFL’s Youtube account, so don’t hold out hope for a “classics” section like on MLB’s fantastic Youtube page (which are all embeddable, by the way).

So at the end of the day, the NFL isn’t killing Vines or gifs, and isn’t giving fans a lifeline here. They’re simply adding another revenue stream, and giving users a little bit of an easier experience. Youtube’s interface is obviously more user friendly than the disaster that is NFL.com’s media section, but the lack of embeddable videos really just means that the NFL is still looking out for number one and doesn’t have much of a desire to make highlights easier to view on a wide variety of properties. Instead of just on NFL.com, you can now view NFL highlights on NFL.com…and Youtube.