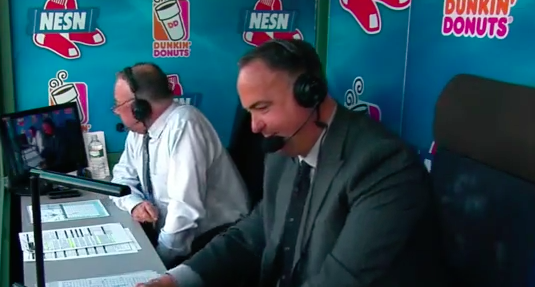 Here’s an interesting nugget from Chad Finn at the Boston Globe regarding NESN and its telecasts of the Boston Red Sox.  Just after the All-Star break, Red Sox play by play man Don Orisllo will be out of the broadcast booth for seven consecutive games.  Orsillo is sitting out from July 17-23 and missing a series against the Angels and the Astros.

Why would the play by play man of the Red Sox take an extended vacation in the middle of the season?  His network is making him do it.

According to Finn, NESN mandates the mid-season vacation for its announcers and top behind-the-scenes personnel to keep them fresh throughout the long grind that is the 162 game baseball season:

NESN implemented the in-season break for its broadcasters last year. Orsillo, in his 15th season with the Red Sox, has said in the past he prefers to work the entire schedule, in part out of fear of missing something important or memorable on a night off.

Last season, Orsillo took his break from July 11-19, which accounted for three games before the All-Star break and two after.

A NESN spokesman explained last year upon implementation of the policy that it is to keep their broadcasters fresh. Color analyst Jerry Remy will also have a break later in the season. NESN has also given in-season breaks to producers and directors.

But the break also serves another purpose for the network. A week off here for its broadcasters means they must work a week outside of baseball season, which is unusual given their grueling schedule from April through at least September.

While Orsillo is taking his enforced timeout from the network, Triple A announcer Josh Maurer will fill in on the NESN telecasts.

We’ve heard of resting players for games for especially difficult stretches of games, especially in the NBA regular season…. but resting announcers???  That’s a new one.

A mandatory mid-season break for announcers is a unique idea, but I’m not sure how necessary it actually is.  Baseball announcers have been calling a full regular season of baseball games for a long, long, looooooong time now and it’s never been a real issue, has it?  On the bright side, it does represent a great opportunity for Maurer to get a run out in the big leagues.

I’d be curious to know if NESN has noticed any discernible improvement in broadcast quality since the breaks have been instituted with their announcers and producers.  Additionally, the specter of telling a baseball announcer that they have to miss baseball games and make the work up later in the offseason doesn’t really sound that appealing.  Much like the players themselves, the broadcasters don’t want to miss a game unless they absolutely have to.  I’d imagine if this were widely instituted across the league (and across sports as a whole), you wouldn’t find many announcers in favor of being told to stay home.