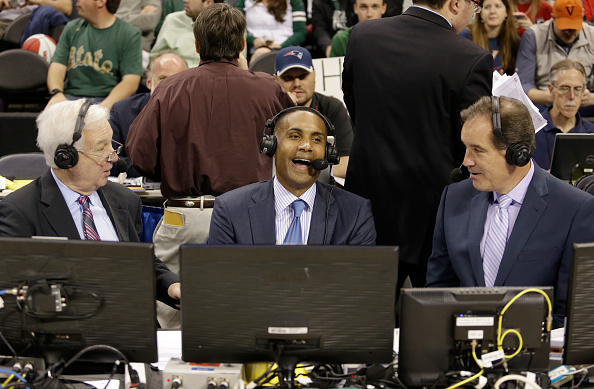 The 2015 NCAA Tournament is in the books as Duke defeated Wisconsin in the title game on Monday night.  It’s time for us to close the books on the media side of things as well as we examine CBS and Turner’s coverage of March Madness.  There was plenty of intrigue this year as the two networks brought eight brand new announcing teams to the table.  The biggest change was enforced mid-season by the arrest of Greg Anthony.  But because of Anthony’s suspension, we finally got Bill Raftery to announce the Final Four.  Who would have thought someone getting caught soliciting a prostitute would turn out to be such a victory for America?

Below is our report card for the 2015 NCAA Tournament including which facets of the coverage drew A-F grades.  And this isn’t North Carolina, you’ve actually got to earn your grades here.

– The highlight of this tournament from a broadcasting perspective will always be that it was Bill Raftery’s first Final Four on television.  Raft was his usual effervescent self throughout the big dance and his presence made the games more fun as always.  We’re a long way away from the days of Billy Packer declaring games over in the first 10 minutes.

– His tenure may be over as the lead game analyst, but you’re not going to find many studio analysts that are better at what they do than Clark Kellogg.  The former Buckeye is one of the more likable people working in sports television and his ability to seamlessly fit in with the Inside the NBA crew and be the knowledgable college basketball voice is no easy task.  Kellogg is a better fit in the studio than the booth and CBS/Turner now has him in a role where he can thrive.

– There’s usually one broadcaster each year that has a breakout tournament.  In 2015, that man was Brian Anderson.  Not only did Anderson expertly call some of the best games of the early rounds, he subbed for Marv Albert to call the epic Elite 8 encounter between Notre Dame and Kentucky.  Imagine coming off the bench like that to work with an entirely new broadcast crew in front of almost 15 million.  You can’t think of Anderson just as a baseball guy anymore, he’s truly become one of the top play by play men working today.

– The tournament itself was a massive success for the networks as seemingly each round set new ratings records.  The NCAA Tournament has risen to perhaps a step below only the Super Bowl as annual sporting events that become transcendent phenomenons.  Once the final totals come in for Wisconsin-Duke, it’s likely the 2015 tournament will have produced the most watched tournament in decades.

– While Bill Raftery’s promotion gets an “A” from us, the new lead broadcast team of Raft, Jim Nantz, and Grant Hill earns a solid “B.”  Nantz has definitely added a bit of extra energy the last couple years to his basketball calls as he’s not just the poetic narrator of the flowers blooming at Augusta.  Raftery only helped the energy level even further.  As far as Hill goes, the NCAA Tournament rookie seemed to be selective in picking his spots, but grew in confidence throughout.  The chemistry of a three man booth is always difficult as it seemed like Raftery was definitely #1 while Hill would follow.  The two analysts did provide some some back and forth, which was welcome, and hopefully that chemistry grows in the coming years.  The changes were enforced, but CBS was able to craft a very good trio that should be in place for a long time to come.

– We already mentioned Anderson above.  Overall, it was a very good tournament for the play by play announcers on the CBS/Turner roster.  The depth is unlike any other package in sports broadcasting.  When you have names like Nantz, Albert, Lundquist, and Harlan that’s a group that hardly anyone can match.  And to think that someone like Ian Eagle can’t even get to the second weekend?  Spero Dedes and Andrew Catalon also had pretty good tournaments to round out the list.  For the record, it was Uncle Verne that won our reader poll forming the top broadcast team with Jim Spanarkel.

– Last year Turner unveiled a new idea – homer broadcasts for the national semifinals that would supplement the national broadcast.  This year the homer broadcasts returned with a rebranded corporate name as Team Streams presented by Bleacher Report.  And while the Team Streams might be fun for a lark for a couple minutes, I’m higher on the Megacast idea from ESPN during the National Championship Game for presenting alternate viewing options.  With announcers brought in from different gigs all over the country, it’s tough to know what to expect.  This year the pendulum swung wildly from Anderson’s mostly straight play by play on the Michigan State feed to the cheerleading antics of Rex Chapman on the Kentucky feed.  If you’re not a fan of the teams involved, it’s just tough to invest any time in the team-specific feeds for any length of time.  Unless I suppose you choose to turn it on the feed of whichever team is losing… if you’re into that sort of thing. 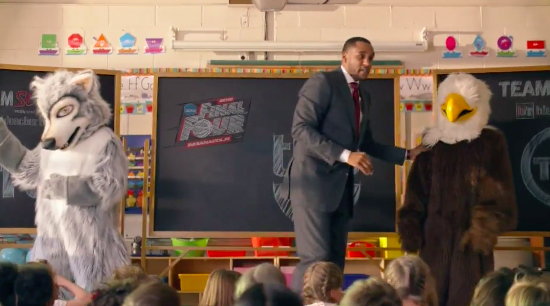 – One thing Turner did do very well was promote the Team Stream feeds and carefully explain them during each game.  However, America gets a “C” because there was still some people that had no idea what they were watching.  I guess the giant “Duke Team Stream” logo wasn’t clear enough?  Oy…

– On the analyst side, it’s always tough for Turner’s NBA voices to suddenly transform into college basketball experts.  For everyone from Charles Barkley (more on him in a moment) and Kenny Smith to Reggie Miller and Chris Webber, there’s always going to be some slip ups.  Sometimes it works out when the NBA and college voices come together (Chris Webber and Len Elmore, Kellogg and the Inside the NBA set) and other times it creates some awkwardness (Dan Bonner and Reggie Miller).  Either way, it’s a part of the tournament coverage that is set in stone in the Turner/CBS conglomerate.

– Maybe it was just me, but in the early rounds of the tournament the March Madness Live app repeatedly crashed on mobile and tablet.  More people watched the tournament than ever before on live streaming and it was frustrating to have to constantly reboot to try and watch multiple games.

– Everyone loves Charles Barkley, but we need to have some real talk about his NCAA Tournament analysis.  Sir Charles has always been a target of criticism for his lack of knowledge about the college game and was badly exposed at a couple of important moments.  During Kansas-Wichita State, he praised the play of the suspended Cliff Alexander.  During the Final Four, he called Justise Winslow by the name of NFL tackle “Winston Justice.”  Those are Millenesque mistakes.

– And speaking of Barkley, what was up with those Capitol One commercials that played throughout the tournament?  All they really did was make Barkley look like he was playing the village idiot.  You’re telling me a guy who’s been in basketball for 30 years and is a Hall of Famer would think the Final Four is in Annapolis, Maryland instead of Indianapolis, Indiana?!?  And he, Spike Lee, and Samuel L. Jackson – who are worth something like a zillion dollars combined – need to carpool together across multiple states to save on gas money?  I know I’m supposed to suspend disbelief and all, but come on…

– You can nitpick with some things CBS and Turner Sports do for the tournament, or just how many NBA analysts moonlight as college basketball experts in March.  However, the coverage for every single game across four different networks is among some of the best in all of sports.  The Final Four Team Streams received improved promotion and the concept seemed to resonate a little more with the public this year.  With the promotion of Bill Raftery this year and some stellar work up and down the talent roster, this marks one of the strongest years in their partnership thus far.