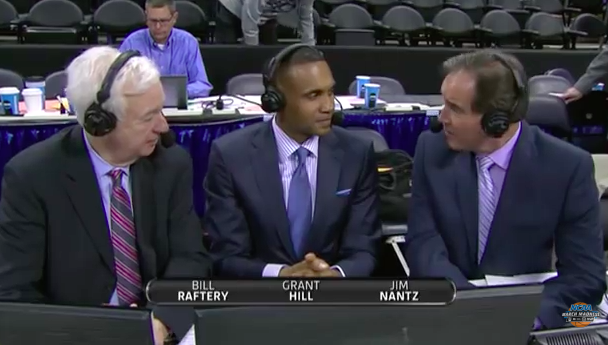 The votes have been cast, the grades have been calculated and we’re ready to reveal our March Madness Announcing Power Rankings!  Before we reveal the rankings, it’s worth noting that all of the broadcast teams graded fairly well.  Every team had significantly more A and B votes than D and F and in the case of the top two teams, we saw a massively positive response on the whole.  CBS and Turner experimented greatly in putting together eight new broadcast teams from last year and it paid off.  All eight of these teams graded out above average according to some of the toughest graders in sports media: our readers.

We begin with CBS’s #8 broadcast booth of Andrew Catalon, in his second year of the tournament, and newcomer Steve Lappas.  The former coach may not be everyone’s cup of tea as there’s a bit of a frantic quality to his analysis.  Call it Bill Raftery Lite.  But in that Lappas had some good lines, like laughing at a player’s shoe falling off.  This was a really important tournament for Catalon after last year’s embarrassment on the first weekend.  He rebounded well and his call of Georgia State’s win over Baylor was top notch.  If anything, this pairing proved that they belong calling March Madness games, and you can’t ask for much more than that from your #8 team.

Dedes and Gminski are just what CBS and Turner would want from their 7th or 8th broadcast booth – a solid, no nonsense call of the game that isn’t going to set the world on fire or offend the senses either.  Gminski has been around for a number of years and is a reliable hand for CBS during the tournament.  Dedes has always been seen as a young up and comer in the industry.  This spot is a pretty fair assessment of where the networks and fans see the pair.

When it comes to the most polarizing NCAA Tournament announcer there is only one possible choice: Doug Gottlieb.  While this group received a fair amount of A’s, they also received the most amount of F’s of any broadcast crew.  The reason for that is Gottlieb, who leads the tournament in fans saying they were employing the mute button for his games.  One example?  Choosing to rant about Dayton hosting the Flyers in a play-in game in the last minute of the game during a timeout.  That really wasn’t the time or place for those thoughts.  (Let’s just say he’s not going to run for mayor of Dayton anytime soon.)  Gottlieb can be abrasive, yes, but on the flip side he also knows the college game very well (unlike some of the NBA imports from Turner).  And furthermore, he’s willing to be critical when others in the sport aren’t.  Eagle is a fantastic play by play man and I thought his pairing with Gottlieb was smart.  Eagle did a good job softening some of Gottlieb’s rough edges and he makes for a good foil to try and lighten the mood a bit at times.

If there’s one group that got under-graded by our readers, it might be this one.  Fifth place is a little harsh, but that does speak to the overall excellent work from the NCAA Tournament broadcasters.  In his first tournament, Webber was strong and outspoken and not afraid to challenge the establishment (hello Kansas ducking Wichita State).  Albert may not be at his broadcasting peak anymore, but there’s still very few others I want to hear call a basketball game.  Elmore more or less had to fit in to the Webber-Albert partnership that looks like it may be TNT’s new lead NBA booth and he more or less did a solid job of doing so.  Maybe this trio didn’t produce A+ work or had a defining moment and that’s why they’re down the rankings a little bit, but still though it was a decent job.

If there’s one broadcast booth that was the breakout of the bunch, it was the partnership between Brian Anderson and Steve Smith.  While they were helped by having some of the most exciting games of the first two rounds, don’t discount the excellent call from this new announcing tandem.  It was interesting to learn during our podcast with Smith that the pair had worked together before and known each other from Smith’s NBA days because you could definitely sense some established chemistry.  Smith had good energy and insights while Anderson continues to build his resume as a very good play by play man over multiple sports.  I’d like to see more from these two, perhaps in Turner’s coverage of the NBA Playoffs if possible.

Without Gus Johnson around, it seems that the mantle for energetic March Madness play by play man has fallen to Kevin Harlan.  His style is a great fit for everything that March brings and he deserves all the plaudits he gets from our readers.  The partnership with Dan Bonner and Reggie Miller had its ups and downs, though.  At some points it felt like a First Take debate was going to break out between the two of them.  You know what you’re going to get from both of them in the analyst chair, so it’ll be worth watching how that dynamic evolves this weekend.

High marks for the debut of CBS/Turner’s new #1 announcing team and if our readers’ grades are any indication, the networks seem to have made the right choice.  Jim Nantz’s basketball play-by-play has had an extra dose of energy the last few years and that’s only further amplified by the pure, unbridled joy of listening to Bill Raftery call a basketball game.  Raft and Nantz fit together like a glove.  The only lingering question might be Hill’s involvement.  A three man booth is very tricky to pull off and to truly make it work there has to be give and take among the analysts.  While Raftery and Hill had some nice banter back and forth, throughout the course of the game you can definitely tell Raftery is the strong analyst while Hill is more selective in picking and choosing his spots.  It makes since because he’s the relative newcomer in this trio, but you’d ideally like to see more from him in the later round of the tournament.  All that said though, this may be the best lead booth for the NCAA Tournament in quite some time.

OH MY GOODNESS!  How about this for a surprise winner in their first year working together?  Verne Lundquist, Jim Spanarkel, and Allie LaForce take home the bragging rights of being the top March Madness announcing team.  Spanarkel has been highly undervalued for years but his analysis is superb and he never draws attention to himself.  LaForce, especially with her basketball background, shines during the tournament as well as she’s able to add some additional perspective other sideline reporters might not have.  And what more could you say about Uncle Verne?  Yea, some of his calls might not be as polished as they once were, but his enthusiasm for the tournament and ability to connect with viewers is still there.