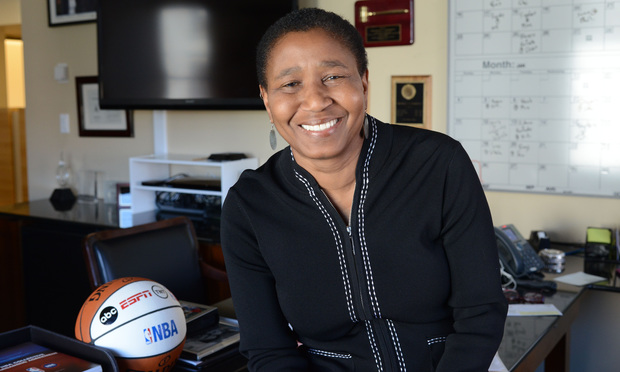 We’ve seen plenty of pushback from athletes against the media recently, from Marshawn Lynch to Kevin Durant, and some of that appears to have moved on to at least one key union executive: Michele Roberts, the head of the NBA Players’ Association. However, while both Lynch and Durant made some good points, Roberts seems to be missing the point. Here’s what she told ESPNw’s Kate Fagan in a story published Wednesday in response to a question about Durant’s take on the media:

“Most of the time I go to the locker room, the players are there and there are like eight or nine reporters just standing there, just staring at them,” Roberts said. “And I think to myself, ‘OK, so this is media availability?’ If you don’t have a f—ing question, leave, because it’s an incredible invasion of privacy. It’s a tremendous commitment that we’ve made to the media — are there ways we can tone it down? Of course. It’s very dangerous to suggest any limitation on media’s access to players, but let’s be real about some of this stuff.

“I’ve asked about a couple of these guys, ‘Does he ask you a question?’ ‘Nah, he just stands there.’ And when I go in there to talk to the guys, I see them trying to listen to my conversation, and I don’t think that’s the point of media availability. If nothing else, I would like to have a rule imposed, ‘If you have a question, ask it; if you don’t, leave.’ Sometimes, they’re waiting for the marquee players. I get that, but there is so much standing around.”

Roberts’ take has since been protested by the Professional Basketball Writers’ Association, who released a statement Thursday disputing her claims:

“Members of the Professional Basketball Writers Association stand for fair and responsible journalism. The NBA’s media-access rules do more than protect news outlets; the rules serve the public because the rules facilitate informed, accurate coverage.

“The suggestion that reporters use locker-room access periods to eavesdrop on players’ conversations or to do anything other than work is inaccurate. The NBA’s pregame media-access period provides a vital forum for building constructive relationships between players and reporters. In the vast majority of cases, reporters are in locker rooms before a game because the reporters are waiting to interview players who are in the training room for treatment, on the court warming up or attending pregame chapel services.”

It’s understandable why Roberts, and the players she represents, aren’t always thrilled to have the media around. However, the PBWA is very right here; it’s hard to imagine a world where media members would choose to waste their usually-limited time staring at athletes. Yes, there’s waiting involved, but much of that is because they need a particular player who’s receiving treatment or otherwise occupied; that’s on the players and the teams, not on the media. Moreover, Roberts’ “If you have a question, ask it; if you don’t, leave” comment is ridiculous, as are her complaints about reporters “just standing there” and her claim that it’s “an incredible invasion of privacy.”

For marquee athletes in particular, one-on-one interviews often aren’t possible even in locker rooms, so you wind up with scrums; not everyone’s going to ask a question in a scrum, nor do they need to if they’re getting the information they need from an athlete’s responses to others’ questions. The reporters in the locker room are there to work, and having their work misinterpreted as “standing there, staring” is quite offensive. Beyond that, Roberts’ complaints about having reporters listen in on her conversations with players are ludicrous; if she wants conversations not to be heard, she should have them during periods when the locker room’s closed to media. If she’s going to be in there during a media access period, what she says seems like fair game.

Roberts fortunately didn’t bring gender into this, but her comments recall some of the lines spouted by the likes of Don Cherry against women in locker rooms. It’s difficult to understand why there seems to be this perception that media members (male or female) want to stare at athletes’ bodies; that’s the furthest thing from the truth in most locker rooms. Locker-room interviews aren’t done because journalists particularly want to be around players when they’re changing; they’re done that way because leagues and teams have determined that’s when they’ll give reporters much of their access, and because it’s less of a time demand on athletes (who can change while doing media availabilities, rather than having to have a separate block of time after changing to talk to the media).

The NBPA in particular shouldn’t have much to complain about, as the NBA reduced pre-game availabilities to 30 minutes from 45 before the 2013-14 season, plus cut the amount of practice time open to media and said individual players no longer have to do interviews both at the morning shootaround and the pregame availability. Those are already substantial concessions to players, and they should be considered here.

None of that is to say that players have to be open with and engaging with the media. If there’s a NBA player who wants to follow in Lynch’s footsteps and give non-answers as a protest, good for them; there are plenty of other people for media members to talk to and other ways to write stories on non-responsive subjects. Durant’s also quite right that the media shouldn’t have the only voice on the NBA, and in 2015, they certainly don’t.

However, putting up with media members in the locker room isn’t the most arduous task in the world, especially when those media members have recently had their amount of access cut substantially. Athletes shouldn’t get all incensed about reporters standing around waiting for someone, either. It’s not like the reporters want to be doing that.