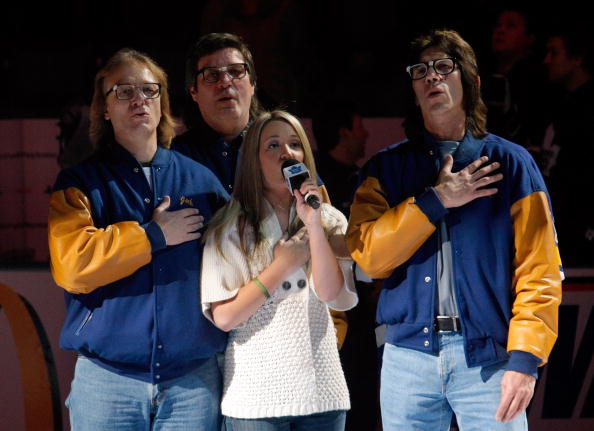 As the NHL Preaseason ramps up, NBCSN is going to provide Americans with its first hockey telecast of the fall on Tuesday. It will air a preseason game using the iconic movie “Slap Shot” as a theme for NBCSN’s inaugural Kraft Hockeyville U.S.A. broadcast.

The Pittsburgh Penguins will host the Tampa Bay Lightning at the War Memorial Arena in Johnstown, PA. The War Memorial was the backdrop for “Slap Shot” and its team depicted in the movie, the Charlestown Chiefs which had the Hanson Brothers.

Bob Costas who used to host just one hockey game a year for NBC/NBCSN, is back for the Hockeyville telecast. NBC points out that Costas got his broadcasting start in Johnstown, PA  as the voice of the Syracuse Blazers. Costas’ first game was between the Blazers and the Johnstown Jets in 1973 and he describes his experience:

“To prepare, I got the roster of teams and studied them until the players were like members of my own family. Then, just before game time, I noticed that the Johnstown owner had sprung for new uniforms – all of the numbers were different. There was no time to relearn the numbers, so when the first Johnstown player on the ice was a guy wearing No. 2 named Francois Ouimet, I decided that he was about to play the game of his life. No matter what the play, Francois was in on it. He scored all the goals and even assisted on his own. He checked everybody, including himself, into the boards. He was in on every play. He was everywhere.”

In addition to reminiscing about his days calling minor league hockey, Costas will interview the Hanson Brothers including Steve and Jeff Carlson who hail from Johnstown.

The NHL on NBC’s Liam McHugh will host the telecast and he’ll be joined by Mike Milbury who knows a thing or two about minor league hockey.

Calling the Pens-Bolts will be Mike Emrick, Pierre McGuire and Jeremy Roenick. And here are some other features on the NBC telecast on Tuesday:

And when the game is over, NBCSN will transition to the movie “Slap Shot” itself starring the late Paul Newman, Strother Martin, Michael Ontkean, Lindsay Crouse, Jennifer Warren and of course, the Hanson Brothers. Expect the movie to be heavily edited for basic cable television.

We believe this is the first time that an NHL game (exhibition, regular season or playoff) has been followed by “Slap Shot.” This makes for a rather unique doubleheader.

One other thing that will be part of the broadcast will be the singing of the iconic “Slap Shot” theme, “Right Back Where We Started From” which was originally performed by Maxine Nightengale and you can see below. Check out the 1970’s fashion and decor in the video:

The whole broadcast begins at 7:30 p.m. ET on Tuesday on NBCSN.