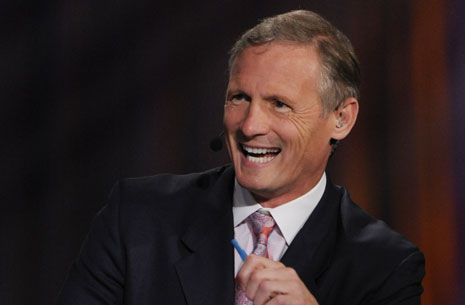 As fans and critics of the show Mad Men know all too well, series creator Matthew Weiner would always drop little details into each episode — a brief line here or a component of the set decoration over there. Whether you liked the show or not, everyone was always aware of one underlying reality: the detail is there for a reason.

Nothing ever entered a Mad Men episode by accident.

That was the first thought through my mind when I noted a specific name in Richard Deitsch’s latest Sports Illustrated media column.

You might have heard: Mayock will not announce Notre Dame football games this fall on NBC, and that “one name” mentioned in Dietsch’s column also appeared in this story by Awful Announcing’s Ken Fang.

Deitsch interviewed Mike Mayock on his latest podcast, which you can listen to at a stand-alone link here. Deitsch thinks highly of Mayock’s work as a football analyst, and that’s clearly a majority position among those of us who cover football (as I do at Bloguin’s college sports hub, The Student Section).

Chris Brown, the author of the “Smart Football” book series, website, and Twitter feed — one of the most recognizable teachers of the sport — has used Mayock’s analysis as a teaching tool. People who study the sport — those who want to learn more about it and teach it to others — appreciate Mayock.

At a time when the Tampa Bay Buccaneers have drawn ridicule for what seems to be a not-so-intellectually-rigorous attempt to “educate” female football fans, Mayock represents the real thing — someone who is interested in football for the sake of football, not as a way to sell team apparel.

Yet, here’s NBC, not-so-subtly choosing to go in a different direction from Mayock.

The name prominently featured as one of Mayock’s most dismissive critics? Former NBC Sports Group Chairman Dick Ebersol. In this world of ours, every detail means something — on Mad Men or in a Sports Illustrated media column and its accompanying podcast.

Ebersol made news for expressing his displeasure with Mayock’s continued and excessive use of jargon during a football broadcast. You can hear the contempt in the voice, and with it, the underlying desire for a bland and unchallenging broadcast… which Doug Flutie (in the booth) and the vanilla ice cream of football analysts, Hines Ward (at the halftime desk), will surely provide.

Should we be surprised? Not one bit.

Here’s a small snippet of what Mayock told Deitsch:

“What I never want to be is a gadget or gimmick guy,” Mayock said. “I can have some fun with ‘heavy-legged waist-benders’ and all kinds of different coach or scout-speak that I am privy too, but I think the important thing is to recognize the intelligence of the audience and try to help them learn why a play worked or did not work. The jargon thing, I understand that any analyst had to speak to a level where even a person that doesn’t understand much abut football can understand. … Whenever you get into verbiage, you have to be carefully about defining it efficiently and quickly. I know I talk too much sometimes. I get excited. I get carried away. I love what I do. I think it is something I have always been aware of but it is an incredibly difficult thing to monitor while you are on a national telecast.

“I think it played a part,” Mayock continued on the issue of jargon and leaving NBC. “But you’d have to talk to NBC management. We had conversations and again I was highly respectful of what they wanted. But I’m also respectful of, in my mind there is a reason I got to where I got to as where I got doing games. I kind of have to be true to who I am … But you also have to be a communicator and I want to make sure I am being fair to both sides. So NBC had an opinion, which I respect, and at some point I still had to be who I am, which is football guy who uses some vernacular and hopefully tries to explain that. It’s up NBC to decide if I fall short of that.”

Dick Ebersol might no longer be the active head of NBC Sports, and he has certainly receded into the shadows to some extent. Yet, his current proximity to the front lines at NBC Sports is noticeable, and what emerges in his comments on football analysts is that while Ebersol has a gift for identifying talent (Al Michaels = brilliant; Tiki Barber = not good), he has a hang-up about jargon.

For instance, the serious football fan doesn’t get annoyed with Jon Gruden for the A-gap references; it’s for the clownish habits and silly phrasings associated with the attempt to be humorous. In other words, it’s not that Gruden is too serious; if anything, he’s not serious enough.

Ebersol would view it the opposite way, and that inclination is also in evidence with Mayock. NBC’s statement on Mayock, released late Sunday night as an update to Deitsch’s column, was offered by a spokesperson, but it certainly seems to contain an Ebersolian flavor. It reads as follows:

“We were pleased with our experiment at the end of last season that placed Doug in the booth and Mike on the sidelines. However, Mike did not want to do analysis from the sideline this year and we respected his decision. We often remind all of our commentators, including Mike over the years, that we serve large, broad audiences, and our communication style needs to reflect that fact. Mike has always wanted to stay true to his own style. We respect that and wish him well.”

The undercurrent is unmistakable: Keep language simple, broad and accessible. Doug Flutie and Hines Ward at your service.

One line Mayock offered in his conversation with Dietsch casts a large shadow over this decision by NBC to move to Flutie in the booth for 2015: “I think we can do smarter programming rather than beat the same thing to death,” Mayock said.

That line was used strictly in reference to football, but anyone who has followed NBC’s existence and the larger arc of Ebersol’s career at NBC Sports knows the assessment is all too accurate in sports other than football. Tennis broadcasts on NBC — now found only at the French Open — are often unbearable repetitions of a few basic star-centric narratives that have little to do with the actual match taking place. The Olympic Games are nothing if not the careful packaging and nurturing of several big stories over 16 days, tugging at heartstrings within a tape-delayed programming structure which is safe, easy to digest, and supremely unthreatening.

On one level, Ebersol is right: The Olympics have continued to become more and more lucrative for NBC, and in terms of reading the public’s appetite for a certain kind of sports content, Ebersol’s instincts are accurate.

The problem — with the Olympics, with tennis, and here with Mayock and Notre Dame Football — is that Ebersol would rather make a buck by not challenging his audiences, by not trying to teach his audiences more about the sports NBC covers. He’d rather make that buck by being safe, not rocking the boat, not offering more food for thought on various sports broadcasts.

If it’s lucrative but anti-intellectual, profitable but set against the attempt to inform a larger national audience, is it right? Those who believe in money would say yes.

Mike Mayock — and all those who would like a higher-quality football broadcast for Notre Dame home games — would just as surely say no.