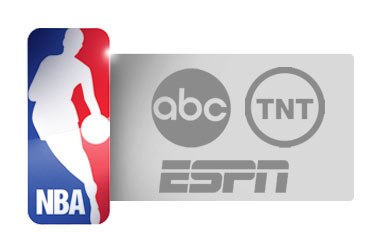 Earlier this month, we brought you the news about the NBA on ABC struggling a bit. Well, the overall viewership from last season to this year was roughly flat (3.588 million viewers this season compared to 3.584 million last year, still the second lowest mark over the past seven seasons), but TNT, ESPN, and NBA TV all experienced drops for their live games during the 2014-15 season.

Oddly enough, both TNT and ESPN saw their lowest average viewership since the 2007-08 season. TNT’s slate of games drew an average of 1.670 million viewers this season, down 12% from the 2013-14 season. ESPN’s games did worse overall, averaging 1.507 million viewers per game, but were down a lower percentage from last season, just 10%. In its fifth year of airing live games, NBA TV averaged 291,000 viewers per game, a 8% drop from last season and the second-lowest average viewership that the network has been seen.

Locally, things were a bit better overall for the NBA. The league’s 29 American teams were up 4% overall on their local RSNs, led by the Milwaukee Bucks jumping 324% on Fox Sports Wisconsin. The San Antonio Spurs had the highest average rating for the season with an 8.1 on Fox Sports Southwest, while the Cleveland Cavaliers saw their ratings on Fox Sports Ohio grow by 172% up to an 8.0 average. The third team to see their average rating rise by triple digits were the Atlanta Hawks, who were up 129% on SportSouth.

But while there are risers, there are (of course) the teams that no one cared about this season. The Knicks were down 37% on MSN. The Lakers were down 27% on TWC SportsNet, perhaps making some cable providers in southern California wish they were airing the Dodgers during the summer instead of the Lakers in the winter. Local ratings for national games in New York, Los Angeles, and Denver also got hit hard, dropping 48%, 46%, and 50%, respectively. Those declines likely had a huge effect on the overall drops in national viewership for games on TNT, ESPN, and NBA TV.

As the NBA’s large market teams go, so goes the league’s overall ratings. If the Knicks and Lakers were competent this year, the national ratings probably would have looked much better. It’ll be interesting to see if the Kobe Bryant retirement tour next season helps give the league a ratings spike in LA, or if a highly-touted lottery pick can make people care about the Knicks once again.