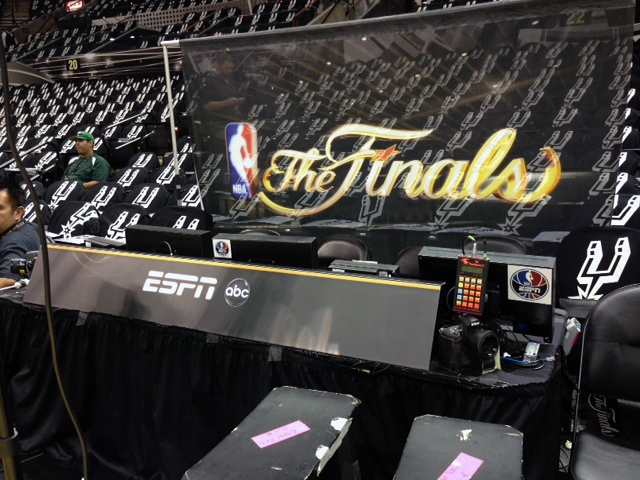 Both the Stanley Cup Final and NBA Finals face-and/or-tip off this week, with both the NHL and NBA hoping to capture the largest possible audience for their respective playoff series. (That seems obvious.)

In doing so, the television executives and league experts charged with putting these match-ups in front of our eyes have decided that primetime is the right time for every game to start.

More people are home at night, sitting in front of their televisions. There is more money to be made in primetime, and with that, start times have gotten later and later as the games get more and more important.

The thing is, there is evidence to suggest those executives might be wrong, or at least historically misguided.

Inevitably, weeknight games in the respective finals must start later to maximize as much of the primetime audience around the country as possible. Starting a game at 8 p.m. in the east means people in the west are just getting out of work, barely able to get home in time for the second period and/or quarter—let alone inning. Starting a nationally televised game any earlier on a weeknight is somewhat ridiculous.

The window is slim on weeknights on the back-end as well. Starting anything after 9 p.m. in the east can hamper ratings as the night wears on. Close contests will inevitably gain more of an audience, but a game that seems to be well in hand as the clock passes four digits—or nears the end of one night and the start of another day—make it hard for networks to please everyone.

Except on the weekends.

Saturday and Sunday playoff games can ostensibly be held at any time, which is why it’s disappointing that leagues, the NBA specifically, have decided to start weekend games nearly as late as those during the week.

The NHL’s Stanley Cup Final schedule features the start time of 8 p.m. eastern for every game of the series except Game 2, which has a more palatably-scheduled time of 7:15 p.m., albeit three days removed from Game 1.

The NBA, however, scheduled every weeknight game to start at 9 p.m. with the two potential Sunday tip-offs slated for just an hour earlier, at 8 p.m. eastern.

Why not go even earlier? Why not give fans one or two games of a seven game series to share the experience with the younger generation of fans?

“Hey, Timmy! Hey Judy! Come watch LeBron and Steph battle it out in overtime of this amazing basketball game! You will never forget where you were! Kids…?”

“Dad, it’s 11 o’clock. We’ve been asleep for almost two hours already. Turn off the damn light and go watch it yourself.”

(Seems Timmy has a bit of a potty mouth when he’s tired.)

Leading up to the Stanley Cup Final, the NHL ratings have been good in local markets, but dreadful everywhere else. The NHL has to come to terms with the fact it isn’t appointment viewing for the masses anymore, so putting games on against primetime television is essentially a failing proposition. If a niche, local audience is going to make your sport appointment viewing, they will watch whenever the game is on. So why not put that at a time that’s easier for other casual fans to watch as well?

While a 7:15 p.m. start on a Saturday is smart this week as a follow to what should be an insanely-highly rated Belmont Stakes, the NHL is back to 8 p.m. next Saturday instead of capitalizing on what could be solid daytime ratings during the weekend.

Take horse racing or major championship golf or international soccer, all events that take place when the sun is shining and do just flipping fine in the ratings. Why couldn’t that work for American team sports?

Oh, right, it does. The NFL still puts the majority of its big playoff games on during the day and they are the highest-rated events of the entire year outside of the Super Bowl…which also kicks off before 7 p.m., by the way.

The Rose Bowl was the third-highest rated college football game of the season, boasting nearly the same rating as the Sugar Bowl—more than 28 million viewers—despite a 5 p.m. kickoff.

The Outback Bowl did nearly 6.5 million viewers at Noon on January 1, with the Cotton Bowl earning more than 9.0 million viewers with a start time 30 minutes later and the Citrus Bowl getting another 6.1 million half an hour after that.

Sure, that was a holiday, but other games this past bowl season did very well during the day as well.

Of the 13 bowl games that had more than five million viewers, nine had kickoff times before 7 p.m. ET.

It’s happened this year in the NBA, too. The highest-rated game in the Cavs-Bulls series—and the most watched playoff game to that point in the post season—was Game 4, which drew 6.9 million viewers for a 3:30 p.m. ET start.

Why take that away from fans in the finals?

Since Christmas the NBA had an afternoon window on the weekends, only to pull the plug on that when the games became most important. Given the on-the-go and on-demand nature of our lives today, it doesn’t make sense for network executives and American sports higher-ups to ignore the fact that giving fans one or two daytime options in a seven game series would help grow the game—reach younger fans every league is desperate to stockpile—at the risk of losing a miniscule bump in the prime time numbers.

Did you know the highest-rated game in NBA history is the series clinching game for the Chicago Bulls in the 1998 NBA Finals. The start time for that game? 5:30 p.m. ET. (UPDATE: @classicTVsports notes that other articles put Game 6 at 7:30 p.m. ET start. “The time listed in that ESPN box score is wrong.” Later, but still not 9 p.m. late.)

Daytime weekend TV can be appointment viewing. Hell, it is every weekend from September through January, so why can’t the same be true for other sports the rest of the year?

Television executives have convinced sports leagues that the money is there after dark, when it’s not always the case.

Can you remember back to 1987? That was the last time Major League Baseball had a day game in the World Series, and while baseball’s run through the late 1980s into the 1990s remained strong on television, the Fall Classic’s ratings have been dwindling ever since.

In 2014, MLB’s World Series ratings were awful, on pace to be one of the lowest-rated series ever, if not for a well-watched Game 7. From the New York Times:

Through Tuesday, the matchup between the Giants and the Kansas City Royals was on pace to be the lowest-rated and least-viewed World Series on record.

Baseball might benefit more than any other American sport by reaching out to young fans with day games in the World Series. Of course, the issue for Major League Baseball is that the World Series coincides with both college football and the NFL, so putting a game on during the day could be prohibitive to ratings from general sports fans.

It can’t be any more prohibitive than what MLB did last season though, putting Game 4 on a Saturday at 8:07 p.m. with Game 5 the next night at the same time.

MLB put a potential elimination game in the World Series up against Sunday Night Football, the night after going up against primetime college football instead of a relatively mediocre slate of afternoon games that week.

Shouldn’t executives be tired of seeing headlines like ” World Series Ratings Off to Worst Start on Record,” and “World Series Avoids a Record Low?”

The networks can spin numbers how they want, but it’s never good to see “2014 NBA Finals Hits Five-Year Low, Among Lowest Rated on Record” or the thankfully-avoided “NBC Is Looking At A Nightmare Stanley Cup Final Ratings Matchup” that it makes one wonder if there might be another way.

Sure, times are different. There are 6,000 channels on to compete against the playoffs that never existed when Jordan won the ’98 Finals or the World Series in the ’80s routinely had 30 million viewers. But as start times continue to get later and later, it has to make you wonder why networks and leagues are reluctant to try going back to one or two daytime games per series.

Primetime ratings can make leagues a ton of money, but they don’t cater to the next generation of fans, and they certainly aren’t showing anyone they are doing much of anything to grow the game — whatever the game may be.

If anything, an entire series with 8 p.m. and 9 p.m. start times might say to young fans that they aren’t important when the games start to matter the most.

The question is: will those sports still be important when the same fans start to matter the most?