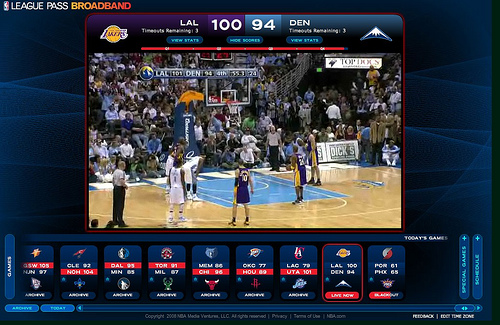 This week, Joe Lucia offered this analysis of the NBA’s new pricing structure for its League Pass package.  By all means, read the article to gain a fuller grasp of the issue and its tension points. Also read the comments (yes, in this case, the comments add to the story instead of making you want to vomit).

What follows in this piece is not a regurgitation of that article, but a commentary on what this means for the NBA-watching consumer.

The most important story to emerge from this new pricing structure is that the NBA has given consumers the chance to be a lot more flexible in how they take in the product of professional basketball. This is not a steal in terms of cost, nor is this arrangement something which is friendly to cord-cutters or people outside the United States who want to watch the NBA from opening night through game 82. By these and other related measurements, there are many ways in which this deal could have been a lot more attractive than it actually is.

However, for all the weaknesses of this deal, one thing it definitely accomplishes in the current cable and mass-media landscape is to offer consumers the ability to customize how they watch an NBA season.

When the NBA schedule is released, and the national television games are rolled out, basketball fans will be able to make more specific calculations about how many out-of-market games they’ll need to find under the new League Pass structure. For the teams that will be making truckloads of national television appearances, committing to the $120 single-team price might not be necessary, but for teams that will be relegated to the margins, springing for the $120 package might be the right play. Those who live in lower income brackets will probably stay away, but those with even a modest amount of disposable income won’t find $120 an overly restrictive price, one that will prevent them from buying the package.

It seems impossible to deny the claim that seven bucks for a single NBA regular-season game (one you presumably can’t find on ABC, ESPN, NBATV, or TNT during the season) is outrageously high. Only people with gobs of “play money” will buy anything more than a handful of such games.

Yet, as unpleasant as that might be, if any fan of a team runs up against the reality that s/he can’t find the preferred team on TV in late February, and this contest happens to be magnified in importance by the unique circumstances of the moment, that fan can pay seven dollars and avoid going without basketball. That “escape hatch” situation will arise at times, and in those select situations, a few fans will be grateful for the outlet.

True, it simply doesn’t strike any rational observer as something that will be used more than half a dozen times or so. However, this does give fans with cable the ability to snag a game at the last minute. This is more important than many might at first be inclined to acknowledge.

Consider this example from the 2015 season: The Golden State Warriors and Atlanta Hawks were not expected to be the top seeds (or anywhere close to that) before the season began. Yet, when they met on a Friday in early February, their game became a must-see event for NBA fans.

However, ESPN (which has the rights to Friday games during the season) did not pick it up. Fans were left scrambling in the attempt to watch it. Next season, if — say — the Houston Rockets and Milwaukee Bucks turn into the 2016 versions of the Warriors and Hawks, and national TV outlets don’t pick up the game, fans can cough up seven dollars to ensure that they’ll see it. On a broader level, seven bucks per game is a raw deal, but in an isolated situation here or there, it can serve a very useful purpose.

When you then (re-)consider the single-team package, you should be able to realize that in addition to finding single games, viewers can find — and lock in — single teams as part of their viewing experience. For the diehards who want the total league experience (or for people employed to watch and report on basketball), the $200 full-package price is worth it, but for fans who don’t have professional basketball-watching obligations, paying $120 plus (let’s say) $21 for three “emergency games” per season will save almost $60 over the course of the season, getting the games they really want to watch.

This isn’t revolutionary, and the cost savings are not dramatic. Moreover, if calculated in terms of cost per game relative to the full $200 League Pass package (which would involve nearly 2,400 NBA games, the entirety of the season for every team combined), the $120 single-team package is a lot more expensive. Yet, for fans who would never think it realistic to catch anything more than 200 or 300 of those 2,400-plus games, being able to spend a little less money remains a good thing.

In conclusion, this is really all about moving cable sports viewing options toward more of an a la carte framework.

It is well known that United States Senator John McCain (R – Arizona) has been advocating for a la carte cable for some time. The possibility that cable offerings will eventually be extended in a la carte form is much greater than it was several years ago. We’re getting closer to that eventuality, not farther away from it. With cord-cutting and streaming and all the other ways in which consumers are seeking more cost-effective and customized viewing methods, it makes plain sense for the NBA (and other sports leagues) to provide menu options which more closely resemble a la carte items.

There’s plenty of room for improvement in this new set of League Pass pricing structures, and there’s also a need to make the NBA more accessible for those who are cutting the cord. Access does remain a problem and a limitation for many consumers. That’s where the NBA needs to devote more of its attention and creative energy.

Flexibility? The NBA fan with at least some degree of disposable income now owns a lot more options when it comes to viewing professional basketball from late October through the middle of April. That’s only a start… but it is a forward movement. Let’s hope for more such movements in the very near future.