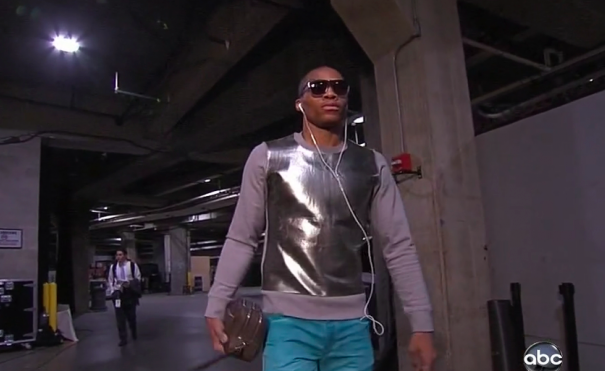 For last several years we’ve all been wondering what kind of new gimmicks there could be to revive interest in the concept of All-Star Weekend.  The Pro Bowl has been a laughing stock for the better part of a decade.  The NHL All-Star Game has all the intensity of an under-8 “game” where everybody is on the same team.  And each and every year we play the never-ending game of pong between “the dunk contest is back!” and “the dunk contest is dead.”

Combine the most creative minds in sports together, lock them in a room for 12 hours, and I bet they’d still never come up with the idea that TNT and the NBA will attempt this year.  An NBA Fashion Show.

NBA All-Star All-Style will air before the All-Star Saturday Night festivities and is produced by LeBron James’ production company along with Turner and sports mogul IMG.  It sounds like nothing we’ve ever seen before:

TNT will exclusively televise the first-ever NBA fashion show – NBA All-Star All-Style presented by Samsung Galaxy – a special showcase for the fashion-forward league and some of its marquee players and top personalities on Saturday, Feb. 14, at 6:30 p.m. ET.

The one-hour show, executive produced by LeBron James’ Springhill Production Company and in association with Turner Sports and IMG, a global leader in sports, fashion and media, will feature a runway competition including James Harden, Klay Thompson, Chandler Parsons, DeMarcus Cousins, Zach LaVine and other NBA stars, along with supermodels and style experts, among others. Steve Mayer of IMG joins James as executive producer of the show.

NBA All-Star All-Style presented by Samsung Galaxy will be taped Friday, Feb. 13, inside the grand ballroom of the historic Hammerstein Theater in New York. The show will consist of three rounds – dressing for the boardroom, a night out, and attire worn to the game – with the players teaming with a stylist and model as they walk the runway. The first round will consist of eight players, with four players advancing to the second round and the top two competing in the finals.

The show will include integration with TNT’s popular Inside the NBA as Charles Barkley and Kenny Smith join the judging panel alongside designer John Elliott, WNBA star Elena Delle Donne and GQ Style Editor Will Welch, while Shaquille O’Neal serves as the emcee. Additionally, Kevin Hart will provide commentary and conduct interviews backstage, and John Wall will be a contributor to the show while Turner Sports style correspondent Damaris Lewis hosts behind-the-scenes segments.

Yea, not only is there going to be an NBA fashion show – the players themselves are going to walk the runways!  And Charles Barkley is going to judge!  And Kevin Hart and Shaq are going to be providing some kind of awkward hijinks.  The only sad thing it’s taped so we can’t see any potential trainwreck moments play out on live television.

I’m not kidding – this could be the greatest thing to ever happen to All-Star Weekend.  On one hand, the players will take it uber-seriously and we’ll have a real competition on our hands where the NBA meets America’s Next Top Model.  Conversely, we could see a telecast so awkward and cringe-worthy that you won’t be able to take your eyes off it and it will be stored in the Smithsonian.  Either way, it’s worth setting your DVRs for.