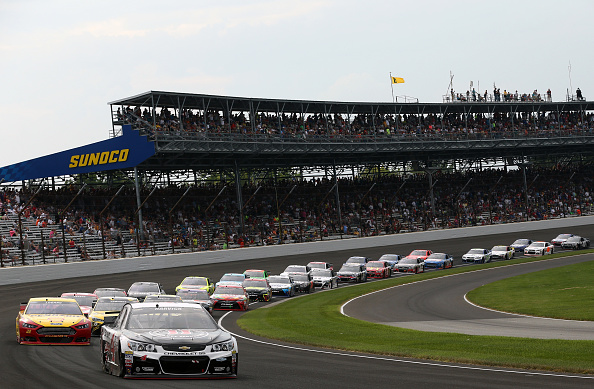 In the first year of NASCAR’s new TV deal with Fox/FS1 and NBC/NBCSN, the numbers did well for the networks, but not necessarily overall for the sport. The 2015 Sprint Cup races across the four networks averaged 5.1 million viewers. That’s down 4% (5.3 million viewers) from 2014, the final year of the previous contract where the races aired on Fox, TNT, ESPN and ABC. And when you compare it to 2013, it’s down even further, 13% when the Sprint Cup season averaged 5.8 million viewers per race.

As for the season-ending Chase for the Cup on NBC and NBCSN, the races averaged 4.1 million viewers and that is down 6% from ESPN/ABC’s 4.4 million in 2014. One caveat, two races that were originally to air on NBC were jettisoned to NBCSN due to weather delays.

But on the bright side for FS1 and NBCSN, they saw some of their highest ratings in their young history. Sprint Cup races accounted for six of the top 15 highest audiences for FS1 since it changed over from Speed in 2013. NBCSN had four of it highest non-Olympic audiences in the history of that network and five out of the top ten.

And NBCSN notes that NASCAR will help pace the network to its most-watched year on record and its most-watched third quarter in its history. From the debut of live NASCAR races during July 4th weekend, NBCSN has averaged 183,000 viewers from sunrise to sunset (6 a.m.-6 p.m. ET) and that is up 120% from last year.

So as Fox and NBC executives would tells us, the numbers are helping to build FS1 and NBCSN and paying dividends. In the short term, the ratings and viewership are down overall from when the races were aired on Fox/TNT/ESPN/ABC.

The 2015 season got off to a good start with higher numbers for Daytona, Atlanta and Las Vegas, but settled into a downward pattern starting in Phoenix until NBC began its half of the Sprint Cup season in Daytona on July 4th weekend, but fell back into the downward trend until Darlington on Labor Day weekend.

Only 9 races of the entire schedule saw ratings and viewership increases from the previous year. And that certainly is concerning to those who love the sport, but at the same time, there’s some potential for increase in the coming years as fans who have FS1 and NBCSN are finding the channels for shoulder programming such as NASCAR Race Hub and NASCAR America which have been among the highest-rated and most-watched studio programs on both networks respectively.

NASCAR hopes that once the new contract is finished in 2024, FS1 and NBCSN will be true destinations for the races. In the meantime, it has to deal with the lower viewership and complaints from fans that the Sprint Cup isn’t being treated with proper respect by not having more races on broadcast TV.