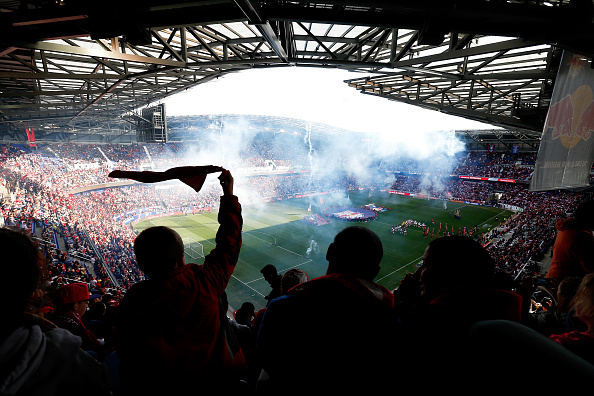 Mirroring the success of what’s been dubbed “Championship Sunday” in the Barclays Premier League each year, Major League Soccer is finally coming to its own day of playoff reckoning this Sunday, televised nationally on FS1 and ESPN. It’s being called “Decision Day.” It has its own hashtag.

ESPN, ESPN Deportes TV and ESPN Deportes Radio will combine to present coverage of Major League Soccer’s first ever Decision Day – five Western Conference matches played simultaneously on the last match day of the season. The networks will televise Sporting Kansas City SC vs. Los Angeles Galaxy from Kansas City’s Sporting Park at 7:15 p.m., while featuring live look-ins to key action at the other four Western Conference matchups – Seattle vs. Salt Lake, Portland vs. Colorado, Vancouver vs. Houston and Dallas vs. San Jose – streamed to out-of-market audiences on ESPN3. Adrian Healey and Taylor Twellman will call ESPN’s #DecisionDay telecast. The match will be streamed on WatchESPN.

The 7 p.m. ET match window will follow an Eastern Conference-laden slate in the 5 p.m. window on FS1, with both television windows using a whip around feature that will enable fans watching on television to catch relevant action from around the league as it pertains to playoff qualification and seeding.

There is a lot on the line this Sunday in terms of MLS playoff seeding, especially with the additional teams MLS added to the playoff mix, making what ostensibly works out to a bye week for the top seeds even more important this year.

That said, the beauty of the final Sunday in the EPL is that, first, all the matches are on at the same time, not in two windows, needed because of the limited MLS audience—especially on an NFL Sunday—that would cannibalize ratings for both FS1 and ESPN as well as the logistical issues around local start times in a country with as many time zones as the United States. That, and all the games are actually on TV in America on NBC’s vast array of networks, not relegated to cut-ins and online streams.

Second, the real beauty of the final day in England is what’s actually on the line. In some seasons, including perhaps the 2015-16 campaign the way it’s going right now, the results of the final day of could decide which club wins the Premiership, and will most assuredly determine which EPL teams qualify for European competitions next season.

Moreover, the real ‘decision day’ in the EPL often determines which teams are sent down, making the squabbles at the bottom of the table more important to some than those at the top.

I’m not trying to turn this into a pro/rel debate in MLS and American soccer, because that’s exhausting and doesn’t serve any point in this context, but the specter of being sent down a division for an entire year (or longer if your team has trouble getting back) does make one country’s ‘Decision Day’ wildly more exciting than the other.

MLS does, of course, have its own excitement in the form of a #Hashtag! Bonus! Sorry….#Bonus!

MLS has partnered with the social media giants [Twitter] to deliver a unique experience to supporters on Sunday, October 25 and in the week leading up to the regular season finales.

Social media staffers will be present at every MLS stadium to help bring the atmosphere and behind the scenes to Twitter’s platforms. In addition, all 20 clubs will be armed with Twitter mirrors, there will be plenty of live Periscopes on the day, and of course, video of all the goals and drama of the day will be showcased on Vine.

“There a bunch of content initiatives we’re doing at venues,” Twitter’s head of North American sports partnerships, Danny Keens told SI.com. “For fans, we’re able to drop them into multiple MLS Decision Day games at once. So fans can connect with all the action that’s taking place on the day and bring them closer to the action than ever before, with Twitter being the center of that universe.”

There’s also a contest where the most “original photo or video” can win a trip to the 2015 MLS Cup. Think hard about that upload, fans. It could be a tough, ahem, decision.

To its credit, MLS is trying new ways each year to reach fans. Social media can be huge for a league like MLS, and putting all the games on at the same time should create something of a frenzy for die-hard fans in every market. It will be interesting to see if the move impacts the ratings for either network, which will help determine how MLS proceeds with events like this in future seasons.