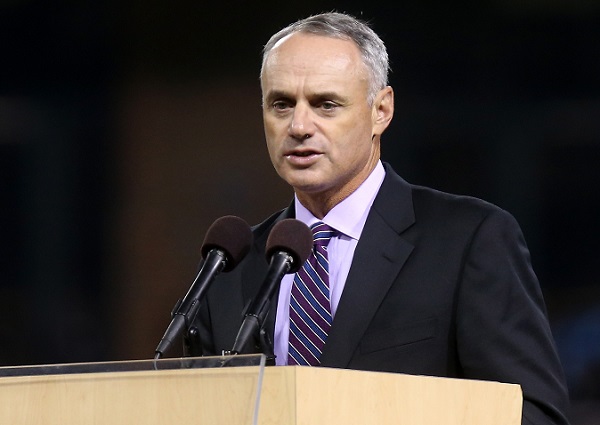 Remember those old Hair Club for Men commercials when Sy Sperling would endorse his product by saying, “I’m not only the Hair Club president, but I’m also a client”? Major League Baseball players won’t be able to make a similar claim when endorsing daily fantasy baseball games like Draft Kings and FanDuel.

As reported by ESPN’s Darren Rovell, MLB and the players union have reached an agreement that prohibits the league’s players from participating in daily fantasy games, yet still allows them to endorse those companies as pitchmen. Since MLB has an ownership stake in Draft Kings, this agreement might raise an eyebrow or two. How can the league partner up with a daily fantasy site, yet not let its players participate in those games?

The issue is a conflict of interest over prizes available in daily fantasy games. If a MLB player stood to win some money in a fantasy game, wouldn’t it call into question whether or not he was doing something to influence — perhaps adversely — the outcome of a ballgame? Obviously, this is why baseball has had such a strict policy toward gambling since 1927.

However, for a commissioner also concerned with keeping young people interested in baseball, you can see the appeal. One of the reasons the NFL is so popular is because fantasy football makes fans invested in the performance of players and compels them to follow the sport closely. Daily fantasy games (whose players tend to skew younger) can stoke a similar level of interest for MLB, which needs that level of engagement.

(This is also presumably one reason why Manfred is open to supporting legalized sports gambling, a position NBA commissioner Adam Silver has already taken.)

While it’s not yet official, MLB also intends to implement a similar policy for all of its non-player personnel. How far that extends isn’t yet known, but it’s safe to presume that if you work in a MLB front office, you won’t be allowed to play daily fantasy baseball for money either.

It should be pointed out that players and non-player personnel are free to play fantasy baseball that doesn’t involve cash prizes. So go ahead and invite Nick Swisher or A.J. Preller to play in your league. (If he plays fantasy baseball as he does the real thing, however, Padres general manager Preller is probably going to crush the competition.)

Correction: A previous edit of this article incorrectly stated that MLB had a reported 20 percent ownership stake in Draft Kings. That figure actually applies to ESPN.