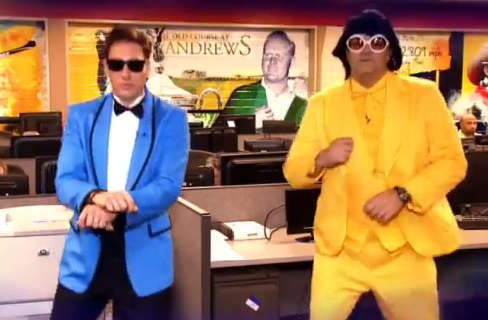 Do you want to feel like time has passed you by and you have no idea where the years went?  How about this fact: Mike & Mike has been on the air at ESPN Radio for 17 years.  17 years!  When Mike & Mike debuted in 1998, Peyton Manning was the #1 pick in the NFL Draft.  That is a long, long, long time to be hosting a national radio show.

Mike & Mike has been very successful over the years for ESPN, not only on the radio but on television as well.  The program was one of the first radio shows to find simulcast success and has been seen on ESPN airwaves for 11 years.  And in truth, it’s the perfect morning show for ESPN – the show does well with advertisers, its content is very safe, and it serves as a promotional vehicle to set the table for the uncountable number of analysts and reporters the network employs.  It is the embodiment of the ESPN Echo Chamber.

But after so many years, it’s impossible for any show to stay fresh and relevant if they don’t find some way to evolve.  And if there’s one thing you can raise as a criticism towards Mike & Mike, it’s that the show is almost too safe, too vanilla, and too stale.  Let’s be honest – the two most noteworthy things to happen to the show in the last year are the display of Mike Golic’s oily butt and Bill Simmons ripping the program to shreds.

Now significant changes are on the horizon to permanently alter one of ESPN’s longest running shows. SBJ reports the program is moving from Bristol to New York City and will add a permanent third voice in Molly Qerim of NFL Network.  It’s arguably the biggest addition to a television duo since Itchy & Scratchy welcomed Poochie the Rockin’ Dog:

“Mike & Mike” is going to add a third person to its on-air cast this summer and relocate the show to New York City in the winter, two of several tweaks planned for ESPN’s popular radio show.

Molly Qerim is leaving NFL Network to move cross-country and join morning radio show hosts Mike Greenberg and Mike Golic. This marks the first time the show has added a permanent third voice since Greenberg and Golic first started working together in 1998, when Greenberg was a substitute host. He became the show’s permanent host in December 1999.

The show plans to move from its current Bristol location to New York City around the Super Bowl. The move, which is said to be pushed by President John Skipper, has the potential to bring higher profile guests into the “Mike & Mike” studio.

It might be semantics, but Qerim being labeled as a “voice” instead of a “co-host” is a curious delineation.  Hopefully she’ll be on board as a full co-host for the program instead of just an update personality or superfluous social media correspondent.  That will go a long way in determining just how serious ESPN is about changing the Mike & Mike dynamic.  (Hopefully Mike & Mike & Molly doesn’t run into any trademark disputes with CBS or anything.)

Given the lay of the land outlined above, both moves make sense.  Being in New York will allow a new cast of characters to join the program as guests (potentially in the studio) and present a different dynamic to the program that could help get it outside the Bristol Bubble.

But the headliner here is Mike & Mike adding that third permanent “voice.”  And really, it’s probably overdue for a change to be made.  17 years is a great run for Mike & Mike as a morning show duo, but it’s now 2015 and the show needs to add some new, diverse voices in order to continue moving forward and not risk completely being a historical relic.  That’s why ESPN has been so proactive in having Cris Carter, Jemele Hill, Michael Smith, and others have larger roles with Mike & Mike.  That’s presumably why Qerim is being brought on board.

To be honest, it is a surprise that ESPN is going outside of Bristol for this third voice/co-host.  There are certainly a multitude of candidates inside Bristol who could step up to the plate, especially Carter, who has often acted as a de facto third host.  (So much so that my sister-in-law always makes the point to me that they should just rename the program Mike & Mike & Cris.)

For Qerim, it’s certainly an extraordinary opportunity in making the move over from NFL AM to Mike & Mike.  She’s faced with the monumental task of meshing together with a duo that’s stayed the same for almost two decades.  And she’s going to have the responsibility of reinvigorating one of ESPN’s most trusted programs.  Those are two tall orders.  Whatever happens, let’s just hope it ends better than her perishing on the way back to her home planet.