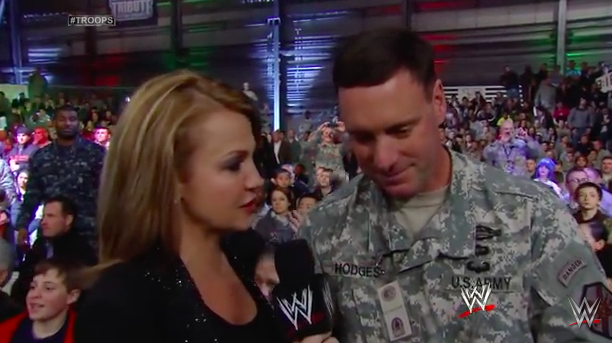 Michelle Beadle is one of the biggest celebrity WWE fans there is.

Correction: Michelle Beadle was one of the biggest celebrity WWE fans there was.

Beadle tweeted over the weekend that she was giving up on WWE because of the company’s support of Floyd Mayweather.  The ESPN SportsNation host has been exceedingly critical of Mayweather and his domestic violence past in the last year and was just coming off getting her HBO credentials messed with by the Mayweather camp in Las Vegas this weekend.

Beadle specifically called out WWE exec Triple H for his personal support of the controversial boxer in her message.

I've loved @WWE for a long time. But @TripleH and his love for a serial abuser is too much. I'm turning in my fan card. #WasFunWhileItLasted

The sportscaster has had such a close relationship with WWE in the last few years that she even did some work for the company at a Tribute to the Troops event while at NBC in 2013.  (Of course that led to some kind of “incident” with WWE superstar AJ Lee.)  Beadle said that she was grateful for all WWE had given her in recent years, but that she was “done now.”

No. They've given me great seats to amazing events over the years. I'm grateful. But I'm also done now. https://t.co/ClFDNCAnUC

Mayweather and WWE have a relationship that goes back to his appearance at WrestleMania 24 in a match against The Big Show.  In the build to the Mayweather-Pacquiao fight, WWE didn’t shy away from their past with Mayweather, running a special on the WrestleMania 24 match earlier in the week.

With Mayweather triumphing over Manny Pacquiao and maintaining his undefeated record, the spotlight upon him is only going to grow.  That means that not just his undefeated record, but his history of violence, will get even more and more attention.  And it also means that those individuals and companies who are unabashed supporters of Mayweather, ranging from Stephen A. Smith to WWE, will have to deal with the backlash that comes with it.