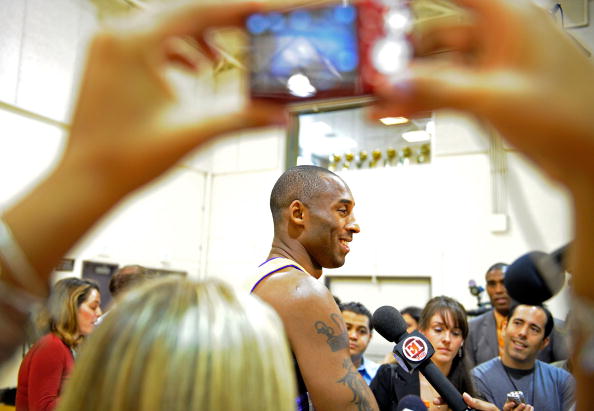 National Basketball Players Association executive director Michele Roberts took plenty of deserved criticism for her comments last week about media members “standing around” in locker rooms and not asking questions, but she’s since backed off those a bit in an interview with SB Nation’s Sarah Kogod that was published Monday.

That interview, which is really more of a two-way conversation, is a fascinating read. It starts off with Roberts essentially doubling down on her stance and particularly blaming bloggers (an incredibly problematic stance, as Hardwood Paroxysm’s William Bohl points out), but after Kogod explains some of the media perspective on her comments, Roberts appears to understand where the other side is coming from and backs down. That’s certainly a positive end result, and Roberts deserves praise for being flexible and rethinking her stance with new information, rather than just sticking to her initial position; there are plenty of sports figures who won’t change course when they’re wrong. However, the way the Roberts situation has played out is evidence of a wider growing problem in sports; many league officials, union officials and players poorly understand the media, and rather than reaching out privately to try and improve that understanding, they’re making inflammatory comments that worsen the relationship between sports media and those they cover.

First, Roberts. Here’s the key part of her conversation with Kogod (who previously interviewed Roberts in depth when she took the NBPA job in October), which illustrates how this situation played out and how she came to understand what media are doing:

MR: …[T]here has been a sense among the players that there are people in the room that are not really there to ask questions. Watching the players, I suppose, is gathering news. But watching them change clothes? What, watching them listen to music? Watch them have their pregame meal? Is that really news?

SK: I can’t speak to other reporters’ processes, but from my standpoint, especially when I used to cover Washington sports, there was a lot of information I could get by watching players interact with each other. Watching them eat with each other, watching them ask each other about their kids, the things they willingly do in an open locker knowing there is media there. There was a lot things to learn about those players and because of that, I was able to build relationships with them where, every time I stepped into their locker room it wasn’t ,‘I need you to answer a question for me.’ Sometimes it was, ‘How are you? How is your son? How was that book that so-and-so recommended to you? I might want to read that.’ And that leads to better relationships for me.

I can’t speak to how other people work, but for me there were times that I would walk into a locker room and walk out without a story. But I was able to have conversations with the players so they don’t feel like they’re just used for a quote.

MR: OK. What you just described is a conversation. That’s perfectly appropriate and I get it that you want to establish relationships with players. And so to come in and ask a question that’s not designed for a story, that’s still doing your job. I take no issue with that.

And if you’re saying — and I can’t doubt you — that actually watching the players interact is, in fact, news, then I’ll accept that. I hadn’t seen it in that light, but if listening to conversations between the players helps you understand them in ways that enhance your ability to do your job, sold. I get it. Yeah, I get it.

I hope that that’s what I’m seeing and perhaps not understanding. That makes absolute sense to me.

Now, that’s not necessarily what everyone in the locker room is doing (Bohl has an excellent analysis of why some bloggers in particular aren’t asking a lot of questions, but are still gaining valuable news), but it’s a good starting point, and Roberts’ understanding of it should hopefully mean less pushback against the media from her and the NBPA. So, the end result here is positive. However, Kogod and Roberts go on to discuss why she made her comments in the first place, and there’s some useful information there with wider sports applications.

SK: OK. Now, this is not a slight on you, just an observation. You’re not accustomed to being in a locker room with reporters and players. Do you think that there may be some things that you can learn from us as far as that process?

MR: Yeah. What would have been helpful is if you were interviewing me — and I don’t know Kate [Fagan] well enough and I’m not being critical of her — but quite frankly if she had said exactly what you just said to me, that would have helped. It would have helped me understand a little bit more about the process that you guys have to go through to do your job. But I didn’t have that conversation with her. I’m now having it with you and it’s, quite frankly, very helpful. It truly is. But I did not have that conversation with her I was asked to note what I observed about what’s going on in the locker rooms and what I found troubling, if anything. And that was my answer.

But hearing from you and your explanation for what the motives might be and how it does, in fact, enhance your ability to do your job is very helpful.

Fagan shouldn’t be thrown under the bus here. Her job in that interview is to ask important questions and use Roberts’ responses to construct an interesting piece, not to lobby for all media or even necessarily respond to comments she disagrees with. Reporters take differing approaches to that last part, with some preferring to challenge their subject when they take exception and others preferring to remain quiet and pass along the subject’s comments, and neither tack is wrong. The real issue here is the venue Roberts chose to make these comments. Yes, she didn’t bring it up, and yes, she answered Fagan’s question honestly, but the head of the NBPA should know that her comments about media procedures and policies would be controversial. Moreover, she should know that she didn’t at that point know why media are doing what they’re doing, and she should have reached out to try and gain an understanding of that before publicly blasting them, either to individual journalists she trusts or to the Professional Basketball Writers’ Association (which was forced to respond publicly thanks to Roberts starting this in the media).

If Roberts’ concerns were serious enough that she wanted changes, she should have took that up with the PBWA, and she should have done so privately. Behind-doors dialogue between league or union officials and media associations can be quite useful in explaining both sides’ positions and coming to solutions that work for both, especially when the real issue is a lack of understanding of motivations (as it appears to be in the Roberts case) rather than a policy dispute. Sadly, more and more officials and players seem to be taking the route of putting the media on blast publicly instead of constructively working with them to find compromise.

This plays into the growing narrative of “The Media as villain,” and it’s one we’re seeing more and more in sports these days. From Marshawn Lynch to Kevin Durant to Joffrey Lupul to Roberts, more and more athletes and sports executives are taking shots at this overall notion of “The Media” (which doesn’t actually exist as a singular entity), and they’re finding plenty of support for that from fans. Individual athletes declining to talk to the media is far from all bad (and North American sports reporters have it easy compared to Premier League media), as that can push media to either be more creative writing about them or to find new, underhyped stories.

However, this increased desire to publicly villainize the media and bring fans on board with that is problematic, and it’s arguably even more troubling when it comes from an executive like Roberts instead of a player. There’s no question that the media-player relationship in many sports probably needs some tweaks, but it’s disappointing to see athletes and executives try to accomplish that through open, public war on “The Media” rather than something more constructive. Media members are far from perfect, and some improvements on the media side are definitely needed, but they still have an important role to play in the sports world. Villainizing them publicly is a short-sighted tactic that’s only going to worsen the media-athlete relationship, not improve it.