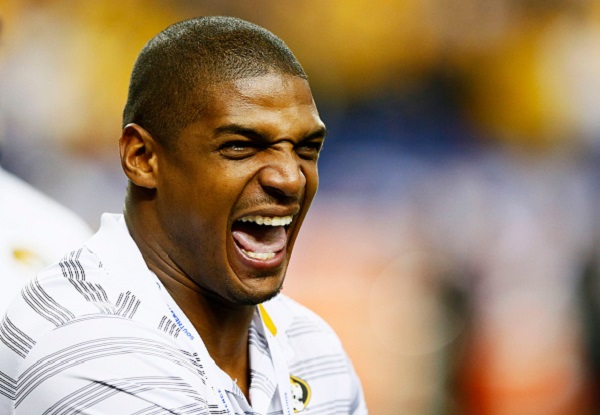 ABC will announce the cast for season 20 of Dancing With the Stars Tuesday morning (Feb. 24) on Good Morning America, but reports are already leaking about who will be participating.

According to TMZ, Michael Sam has signed on to one of the contestants in the ballroom dancing competition. The 25-year-old has not been on an NFL roster since being released by the Dallas Cowboys last October. Sam isn’t giving up on his pro football ambitions, however. The TMZ report says he intends to take part in the upcoming veteran free agent combine on March 22.

That schedule could present a bit of a problem for Sam, as the new season of Dancing With the Stars begins on March 16 and will demand the next three weeks of his time as he trains for the competition. The combine being a one-time event could work in Sam’s favor, but given the “distraction” card that the league has played with Sam, expect a cycle of the same predictable debate surrounding this announcement.

As far as the show is concerned, Sam attempting to impress NFL teams while also practicing his dance routines for hours should make for compelling television, at least for a couple of weeks.

NFL players have been popular contestants in previous seasons of DWTS. Jerry Rice, Michael Irvin and Warren Sapp have competed on the show before and gone deep into the competition, while Emmitt Smith won the season three contest in 2006. Jason Taylor and Hines Ward even participated as active NFL players, with Ward nabbing the mirrorball trophy during season 12 in 2011.

Adding Sam to the cast is a savvy move by DTWS producers. Not only do they get another professional football player (well, technically, since he’s not currently with a team) who can draw in a sports audience, but someone known among casual football fans and even non-sports fans.

Sam benefits by being on network TV every week (while he remains in the competition) and keeps his name in the national profile. An NFL team looking for some good publicity might go for signing Sam to its roster and giving him another chance, either while he’s on the show or after his participation has ended. Football people might disagree, but this doesn’t seem like a bad move for him.