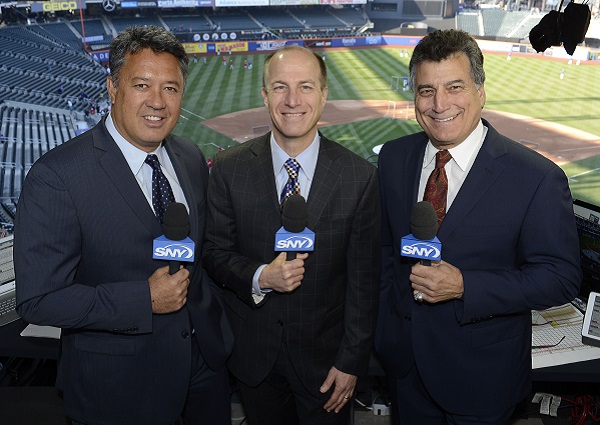 The 2015 New York Mets season will represent the 10th year together for SNY’s (SportsNet New York) broadcast trio of Gary Cohen, Ron Darling and Keith Hernandez. It’s an impressive run, one not typically seen on regional team broadcasts. The success is even more notable, considering how rare three-man booths are on sports television these days.

But the SNY team makes it look easy, with a smooth chemistry and refreshing candor that’s made it extremely popular among Mets fans and considered by many to be the best broadcast booth in MLB. So what has been the key to the trio’s success? How has it worked so well over the past nine years?

“I think the thing that works best for us — and it really is rare in television, especially when you have two players who had great careers — is that we have a very low-ego booth,” said Cohen, who had called Mets games on radio for 17 years before moving to TV.

“What I mean by that is, nobody needs to be the star. You hear it sometimes in other broadcasts, where there’s almost a competition for the microphone, and that’s never the case on our broadcast, even when we have three in the booth.”

A key part to the team’s chemistry is that each man understands his role, which was established early on by Hernandez. In fact, the former Mets first baseman laid the groundwork just minutes before they went on the air for their very first broadcast during spring training.

“I remember Keith poking me and saying, ‘Hey, listen — you do the pitching, I do the hitting,'” recalled Darling. “And simply, in that one sentence, he kind of cured all the ills that happen with a three-man booth.”

But even with those roles defined, there’s still the risk of Darling and Hernandez talking over each other or Cohen having to play traffic cop during the broadcast. Yet early on, and especially after nine years together, the three have developed an unspoken understanding of who should speak and when.

“It didn’t take long, really,” said Hernandez. “At this point, we kind of look at each other. When Gary asks a question, it’s never ‘Who goes first?’ When Ronnie has something to say, I can sense it, and I think when Ronnie feels I have something important to say — whether it’s with my body language — we can sense that. I can’t put a finger on it and say why, but it’s all a part of our process of working so cohesively together.” 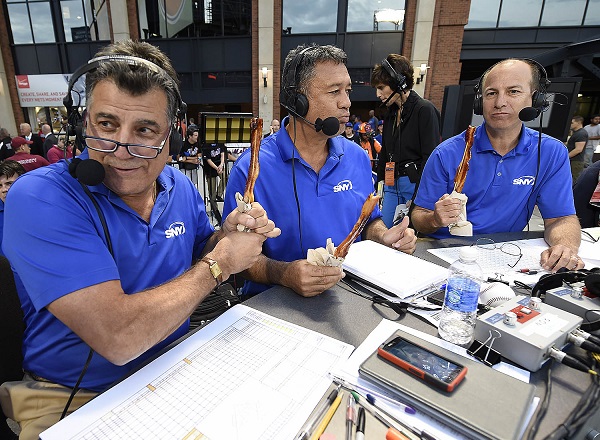 Each broadcaster also makes a point of crediting their on-air success to the people you can’t see or hear on television, producer Gregg Picker and director Bill Webb.

“I cannot tell you how many times I’ve been in the middle of a sentence and I forget a specific word, what’s the appropriate word, and Gregg’s right there,” Hernandez said. “He’ll say the word and I don’t skip a beat in my sentence. But Gregg is also a baseball fan and when we say things that need more, he says, ‘Well, you have to elaborate on that.

Yet the roles in the booth have also evolved over time. This spring, Darling occasionally took over play-by-play duties while Cohen called Seton Hall basketball games on the radio. Darling suggested himself as a fill-in to SNY executive producer Curt Gowdy Jr., not only to substitute in case of emergency but to break up the monotony that sometimes develops during spring training.

Another evolution from an audience standpoint has been an interest, perhaps even a demand from a certain contingent of the fanbase, in including advanced metrics in the broadcast. So much more information is available now to viewers and broadcasters alike. However, determining what’s pertinent during the telecast and playing to the wider audience at large are factors that have to be considered throughout.

“I think it’s an interesting line, and the line keeps moving,” said Cohen. “The people who are tuned into advanced statistics are generally very intelligent and very vocal. But I don’t think they necessarily make up as large a percentage of the people watching the games as they think they do.”

“When people come up to me and talk to me about the broadcast, I can’t tell you that any person has ever said, ‘You don’t use advanced statistics enough.’ Most of them, they want to know about the players’ personalities. They want to know about how someone improves their batting stroke or throws a curveball. They’re much more interested in the mechanics of the game, the group dynamics and personality of the game, than in a slew of numbers.”