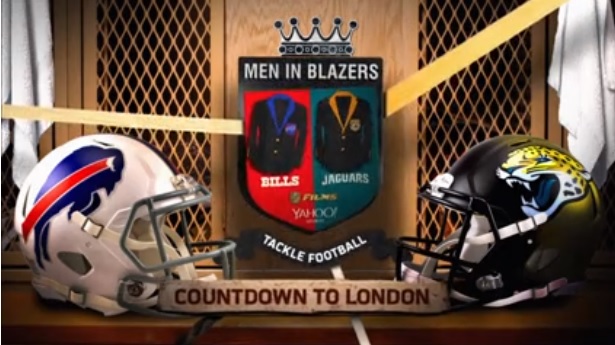 Next month’s Bills-Jaguars game that is taking place at Wembley Stadium in London will be streamed exclusively on Yahoo. To help promote the game, Yahoo and the NFL have partnered with an unlikely source – NBC’s suboptimal soccer duo, the Men in Blazers.

Men in Blazers: Tackle Football will go behind the scenes and in-depth with the Jacksonville Jaguars and Buffalo Bills as the two franchises prepare to kick off a new era of sports programming with their October 25th game in London’s Wembley Stadium which will be streamed live to a global audience on Yahoo sites and apps. In a move media analysts are calling a “milestone event,” the October 25th game in London between the Jaguars and Bills represents the first time ever an NFL game has been streamed for free around the world as its primary mode of distribution.

Using a style that has gained Davies and Bennett a cult-like following and large social presence, Men in Blazers: Tackle Football will provide a unique and unprecedented look at both the Jaguars and Bills. With NFL Films as their escort, Davies and Bennett will interview key members of both organizations—from ownership to equipment managers and everyone in between— utilizing their keen wit and intelligence as they explore the world of professional football in the United States.

“Combining the storytelling and access of NFL Films with the wit and intelligence of the Men in Blazers is a match made in sports production heaven,” said NFL Films coordinating producer Keith Cossrow. “The beneficiary of this collaboration will, of course, be the viewer who will get a whole different take on American Football, the NFL, Buffalo, Jacksonville and their respective franchises. It will be an entertaining ride.”

The first two videos are up on Yahoo, NFL.com, and the Men in Blazers website, and they’re about what you’d expect from the pair.

The partnership may seem like an odd one on the surface, but it makes sense. The game is in London. It’s Yahoo’s first foray into live streaming an NFL game, so why not raise some awareness and promote some pretty “meh” teams by bringing in a completely irreverent pair of English sports fans to create original content focusing on the game?