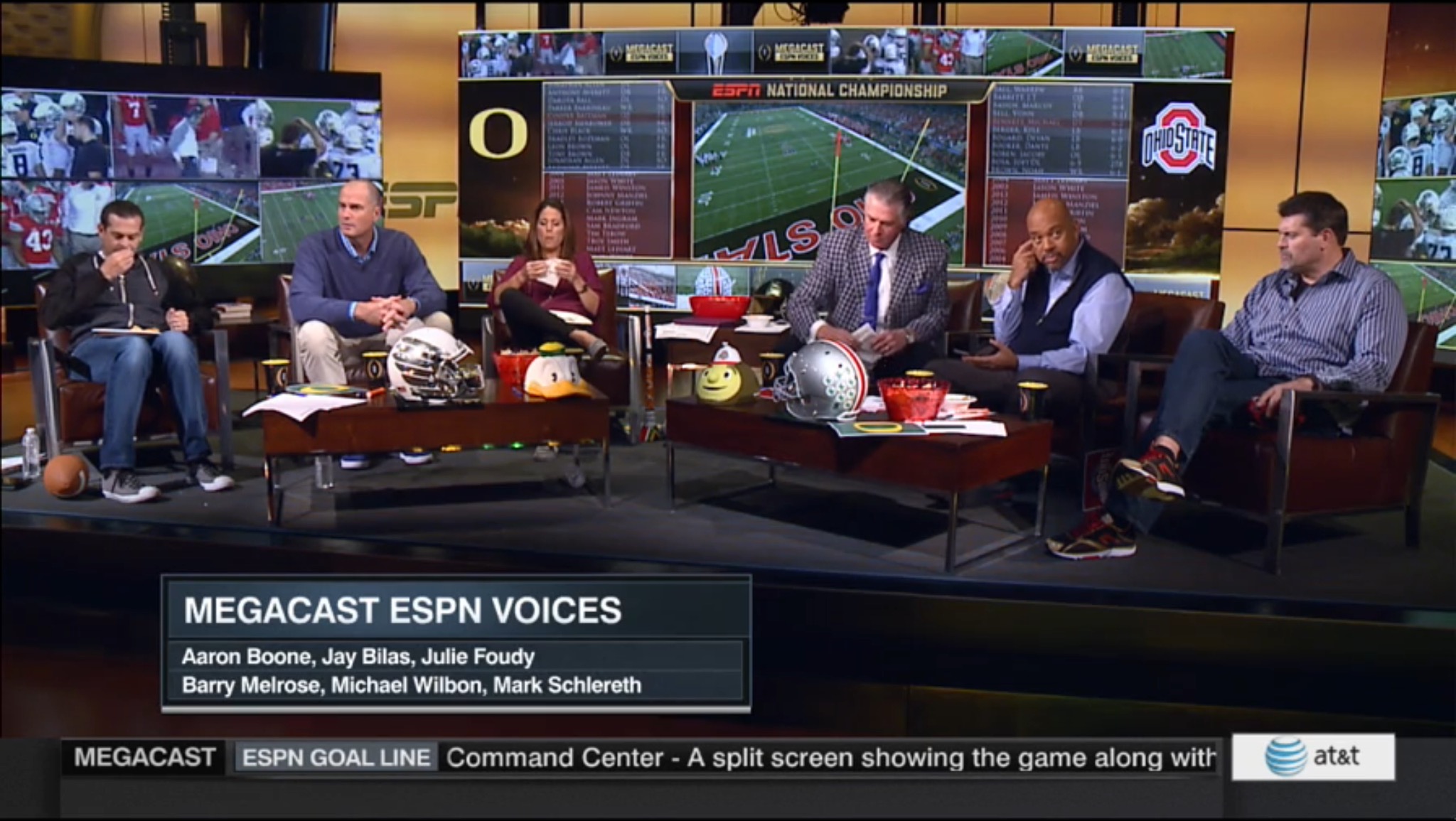 When the details about ESPN’s Megacast for Ohio State-Oregon began to roll out, I was dreading what would be chosen as the replacement for last season’s disastrous “Title Talk” simulcast. Last year, it seemed like 40 people were coming and going during that broadcast, and it was a chaotic mess. This year, the acclaimed Film Room broadcast moved up to ESPN2, while the new Off the Ball broadcast (which fell a bit flat) took over ESPNEWS. And over on ESPNU was ESPN Voices, the nominal replacement for Title Talk. It was billed as something similar to Title Talk – people who weren’t college football analysts watching the game. However, it was worlds more enjoyable than Title Talk a year ago, cruising past the low expectations set ahead of time.

ESPN Voices made a couple of big changes from Title Talk a year ago. First off, the featured guests weren’t rotating – the panel of six stuck around to watch the entire game, and as a result, were actually able to build chemistry with one another over the nearly four hour broadcast. Secondly, the entire panel was made up of ESPN analysts who were used to watching big games – there weren’t any C and D list celebrities rolling in to add their two cents.

Each of the six analysts all represented a different sport too, and none of those sports were college football. You had the baseball analyst (Aaron Boone), the soccer analyst (Julie Foudy), the college hoops analyst (Jay Bilas), the NBA analyst (Michael Wilbon), the NFL analyst (Mark Schlereth), and ESPN’s NHL stalwart (Barry Melrose). It was a crew you’d never expect to see hanging out together watching the game, but somehow, it all worked quite well.

I wasn’t too keen on ESPN Voices going in, but I switched to that broadcast at the start of the second quarter at the recommendation of my AA colleague Ken Fang. What I then watched for most of the next three quarters was mindlessly entertaining. It felt like I watching the game in a bar with friends. Instead of thinking about the play calling and what was going right or wrong on the plays, I was just watching the game, enjoying myself, and listening to relevant stories during slow points of the game. For example, Jay Bilas went on a tangent about professionalism in college sports and how to “fix” the NBA and NFL Drafts, and the discussion felt candid and not forced at all. The panel also didn’t try to BS viewers with their knowledge – they openly admitted to not being experts on what was going on. I found the frankness refreshing when everyone seems to be an expert on whatever they’re talking about.

ESPN Voices also provided some ridiculous moments that you typically wouldn’t see during an ESPN telecast, such as…

Now Melrose is chowing down. pic.twitter.com/IRhZ0LpzpU

A vuvuzela also made an appearance, but let’s not try to relive that.

The greatest part of the evening on ESPN Voices was the cast’s fascination with head referee Greg Burks and his resemblance to Bob Newhart. That led to a fantastic tweet from Newhart himself.

In regards to my new career as head ref for #OSUvsORE – Hey, I don't have a series any more – I had to do something. #OSUvsORE

ESPN Voices wasn’t some sort of bastion of journalistic integrity for ESPN. It wasn’t an example of them crossing boundaries, breaking barriers, or setting a new standard. But dammit, it was a massive improvement on the worst element of last year’s Megacast, and that alone makes it a success.