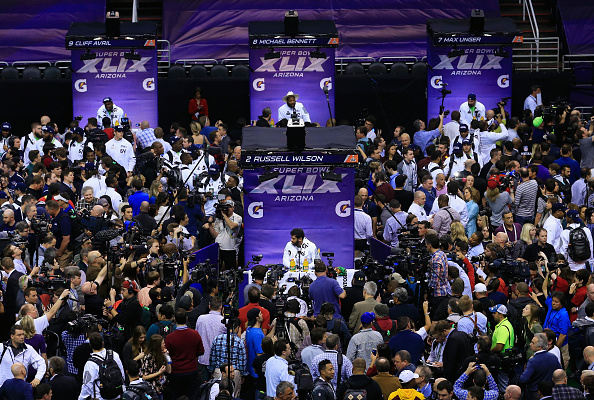 Ever since Super Bowl Media Day, it seems as if the titanic struggle of “Marshawn Lynch vs The Media” has overtaken DeflateGate as the controversy du jour in the lead up to the big game.  Even Katy Perry made light of the situation, quoting Lynch’s “I’m just here so I don’t get fined” mantra during her press conference on Thursday.  The fact that the Super Bowl halftime performer has a press conference of her own is worthy of another thinkpiece for another day.

Lynch’s relationship with the media is one that is quite paradoxical.  While he shuns NFL beat reporters, stonewalling them with refrains like “I’m thankful” he’s shown a willingness to open up elsewhere.  Here he is in a video talking about his clothing line to SI and there he is appearing in a comedy segment on Conan O’Brien.  It’s not like he’s a recluse, he just doesn’t want to talk to NFL reporters.

What’s the big deal with that?  On the micro scale, it really should be a non-story.  Earlier this week we presented both sides of the Lynch v Media debate and I’d lean more towards what Andrew Bucholtz said.  There’s other stories out there, other players to be interviewed.  If Lynch doesn’t want to go through a vapid dog and pony show, why should any credible reporter?  The earth continues to spin on its axis just fine.  Lynch himself put it best on Thursday, “If y’all mad at me, then what are y’all here for?”

Why were they there?  So the media could become part of the show.  By villainizing Lynch, the media got a million times better of a story than if they had just ignored him.

Instead of letting Lynch be, what we’ve seen this week is enough of an inflated sense of self-importance from the media to turn Lynch into a sympathetic figure and prove him right.  What we’ve heard is that Marshawn Lynch made a mockery of Media Day.  Yes, it’s Lynch’s fault that the sanctity of Media Day has been forever tarnished, not the naked guy in the barrel.  What we’ve heard from many corners of the media this week is that Marshawn Lynch better pay his dues because without “the media” there would be no Marshawn Lynch.  And that couldn’t be further from the truth.

Players answering questions from reporters is not the one piece in the Jenga game that causes the whole tower to tumble.  It’s not the one link in the chain that will cause professional sports to collapse on itself.  The NFL doesn’t owe its success to “The Media,” whatever it is that catch-all has come to be.  Marshawn Lynch doesn’t owe his success or popularity to “The Media.”  115 million people won’t watch this year’s Super Bowl because of “The Media.”  All of that happens because we love football.  And yes, we can drill down and say television and radio are a part of that.  We can concede that newspaper coverage and the existence of ESPN are a part of that.  But all of that interest and popularity and money comes from fans, not media.  Somewhere along the way the media lost sight of their supporting role.

But this villainzation and scapegoating process is a two way street, and shows that the situation is much more complex than first appears.

Far away from Glendale, Cleveland Browns WR Josh Gordon wrote a first person piece for The Cauldron, continuing a theme of athletes crafting their own message on a platform of their choosing.  Gordon’s column is a lengthy screed aimed at various members of the media who have expressed concern over his off-field troubles.  He names Charles Barkley, Stephen A. Smith, and Cris Carter specifically for their past comments about him and his off-field troubles.  While Gordon attempts to share his side of the story on his latest violation and looming one year suspension, the overall tone of the piece seems to be a futile attempt to move the goalposts.

Gordon tries to reason with his audience that he doesn’t really have a substance abuse problem, he just made a couple simple mistakes.  And at the end of the day, all of his doubters and haters in the media are wrong about him.  Josh Gordon is basically saying, “yea, I’m ultimately responsible for taking a blowtorch to my NFL career… BUT THE REAL PROBLEM HERE IS THE MEDIA.”

So Charles, Stephen A., Cris — you judge me now, but what if you came from where I come from? Heck, maybe you did experience similar upbringings, but I wouldn’t know, because I do not know you. Each of you have dealt with more than your fair shares of self-inflicted controversies, though, that I do know.

If you see me someday, Chuck, Stephen A., Cris, or any other well-intentioned person to whom this letter is directed, please come on over, shake my hand, and say hello. I won’t be holding a grudge, but I will expect you to admit you were wrong about me.

The disconnect in Gordon’s story is massive.  On one hand, he’s trying to give a mea culpa and take responsibility for his transgressions.  And yet at the same time, he’s trying so hard to turn himself into the victim against the rabid, overly concerned media because they don’t know the real Josh Gordon.  It can’t be had both ways.  And Gordon trying to use the media as a scapegoat and sell this redemption narrative on the verge of another lengthy NFL suspension isn’t going to help his cause.

In truth, the Lynch and Gordon dramas are just a couple pages in a much larger narrative here.  That narrative is the changing athlete-media dynamic and the coarsening of that relationship.

With the advent of social media and blogging platforms, athletes are discovering that they don’t need to send their message through the media machine to possibly come out the other side as something different.  Rather, they can take their message directly to fans.  That’s why The Players Tribune exists.  That’s why we’re seeing articles written by athletes appear at sites like The Cauldron.

From the perspective of the athlete, it makes perfect sense.  Instead of depending on a reporter telling your story, you can tell it on your own (or perhaps with your agent and PR team) and cut out the middle man.  Furthermore, athletes see top coaches like Bill Belichick and Gregg Popovich largely stonewall the media and survive just fine.  If the coaches can get away with it, why can’t the players?

But athletes can’t blame all their problems on the media.  And the media can’t stamp their feet every time they don’t get their way.

The entity of the media as a whole has been slow to adjust to this changing dynamic and the changing attitude of players.  There are many other ways to get a story than by sticking a microphone in someone’s face.  If an athlete doesn’t want to talk to the media, there are still a limitless number of paths to pursue a story.  However, what we’ve seen is the media be quick to pull the trigger on why Athlete X is a bad person for not filling our notebooks with run-of-the-mill quotes.  The Media Day question to Lynch “why do you have to be a jerk to all of us” embodies this issue.  Instead of adjusting their pursuit of a story in the face of non-cooperative athletes (everyone encounters jerks in every walk of life) the media would rather pout and get their story that way.

Thus, the athlete-media relationship snowballs into an antagonistic one.  Each side becomes a very convenient bogeyman for the other.  Seahawks WR Doug Baldwin can rant and rave about haters and doubters in the media.  The media can get their pageviews by pigeonholing Lynch as an entitled diva.  And so on, and so forth.

In this scenario, and in the two examples outlined above, nobody truly wins.  And unless athletes and reporters find a way to better work with one another, or at least tolerate one another, this week’s evidence of that coarsening relationship will be only the beginning.