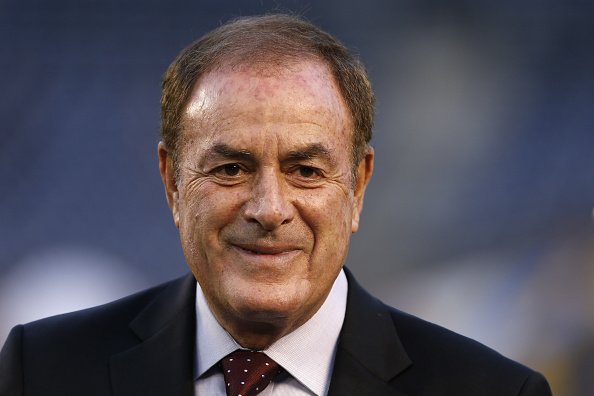 In Marv Albert, Bob Costas and Al Michaels, you could argue that they could belong on a Mount Rushmore of broadcasters from the modern era. And while this site has done its share of Mount Rushmore polls, we’ll leave that argument for another time.

When you discuss Albert, Costas and Michaels, you realize that the trio have worked in various combinations, Albert and Costas on the World Series in the 1980’s for NBC, the NBA on NBC in the 1990’s and the Olympics as well. As for Costas and Michaels, they have worked on Sunday Night Football since 2006 in addition to their joint appearances in BASEketball and that one Mets-Giants game they called together for MLB Network in 2011.

It was just this year that Al and Marv got to work with each other for the first time on the new Premier Boxing Champions series on NBC. Now, PBC on NBC will link all three together in a primetime broadcast on April 11. Michaels will be in his customary hosting capacity and Albert will be ringside calling the blow-by-blow with partner Sugar Ray Leonard.

Costas will voice a feature on the history of boxing in New York as the latest PBC card will take place at the Barclays Center in Brooklyn.

From the press release, Costas is quoted as follows:

“While I have done many broadcasts with Al and with Marv, this is a one-time opportunity to work on the same broadcast with two of the all-time greats, plus it’s a chance for me and Al to renew our ongoing debate with Marv as to which was the greater cinematic achievement – BASEketball or The Fish That Saved Pittsburgh.”

Michaels added “to have it all happen close to where we all grew up makes it that much more special. Very, very cool.”

And Albert said, “I’ve always had great admiration for the work that Al and Bob have done through the years, and I’m proud to call them friends.”

So instead of baseball, basketball or football, it was boxing that will bring Albert, Costas and Michaels together. Maybe one day, we’ll get a megacast of them calling an event together.