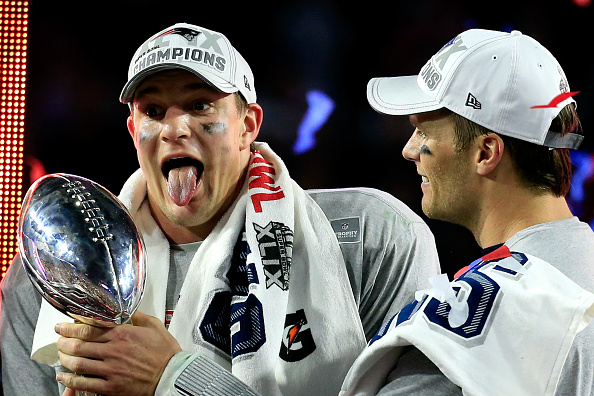 There’s at least one similarity between this year’s champions in both the NFL and college football.  Both the Ohio State Buckeyes and New England Patriots were counted out as contenders during the course of the season.  Ohio State’s hopes for a championship were infamously declared dead by all the experts after a September loss to Virginia Tech.  Similarly, there were a ton of analysts who had the Pats dynasty with one foot in the grave after a blowout loss to Kansas City on Monday Night Football in Week 4.

Both teams stand as reminders that championships are never decided in September.  Trent Dilfer’s comments in that MNF postgame that night that the Patriots “aren’t good anymore” are the high water mark of the rush to bury the Pats.  Keep in mind that the Patriots were still 2-2 at the time after the Kansas City defeat, it’s not like they went to 0-4 on the season.  Nevertheless, there were plenty of other crazy rushes to judgment and knee-jerk reactions that in retrospect are really quite something.

If you’re thinking Super Bowl right now, I’d say yes, it’s time to lower your expectations and get back to focusing on what’s going on within the AFC East. You have three teams that are 2-2. I think it’s going to turn out to be a competitive race.

Also, it’s time to lower your expectations offensively and raise them defensively. I don’t know what can be fixed right now offensively when you have offensive line problems like they have. When you think your two offensive tackles might show you some good play, and they’re not doing that. Then with two rookies in there, and a rotation they tried to implement — Nate Solder’s out, Solder’s in; Ryan Wendell comes in and plays guard when he was your starting center for two years. They have major problems up front.

I’m going to tell you this: Even if they had Wes Welker, Randy Moss and whatever offensive weapons you want to name, they’d still be struggling, because they can’t block. As much as you want offensive production, football on offense is about blocking first. If you can’t run the ball or protect, you’ll never a get a chance to see anything else.

To make this even better, Bruschi was the honorary captain for the Patriots at Super Bowl XLIX.

The Patriots offense is in a tailspin, and people are starting to ask the question: What is wrong with Tom Brady?

New England needs a plan in case Brady’s poor play continues. The quarterback has one of the more unique contracts in the NFL, which leaves the Patriots with two options, both of which require change for the franchise.

For years the Patriots have planned roster strategies around the idea that Brady would cover mistakes. The quarterback seemed impervious to roster turnover, but in the past two seasons the Patriots jettisoned wide receiver Wes Welker and guard Logan Mankins for low-cost replacements. Both cases have led to poor results.

Many analysts last season felt Brady had lost the ability to make certain throws and could no longer drive the ball. Brady indeed has seen a statistical decline in each of the last two seasons, and he’s on pace for the worst non-injury season of his career.

For the first time since perhaps a 9-7 finish in 2002 that was sandwiched between two Super Bowl victories and, if not then, certainly a 5-11 campaign in Bill Belichick’s debut season in New England, the powerhouse Patriots just aren’t very good.

Not even the biggest “homer” could have watched the first quarter of this controversial, confounding NFL season and wake up this morning saying otherwise. From the coach to the bottom of the bench, it’s indefensible.

The same generic phrases we’ve heard for years, even after tantalizing triumphs. Now, though, it rings true more than ever, and the cavalry isn’t on the way. The Patriots are already about as healthy as they’ll ever be.

Unfortunately, if only for a season, this is the Pats’ new reality; a preseason Super Bowl favorite destined for an early, potentially lifeless postseason exit.

Reports of their demise always have been greatly exaggerated.

The game has certainly not passed the great Belichick by.

But Tom Brady has never been 37 years old before.

And right now he is looking the way most 37-year-old quarterbacks look, and Father Time shows no mercy to Pretty Boys, either.

Which means we may be witnessing the beginning of the end of Tom Terrific as an elite quarterback.

So this is how the New England Patriots dynasty dies: with thunderous applause.

Their failure was so complete, so embarrassing, that it’s hard to see any way they’ll win more games than they lose—let alone collect their usual division title or represent the AFC in the Super Bowl again.

If forced to lay a proportion on the odds that it would actually come to fruition, we’d probably have to place it somewhere around five percent, which is still a significant hurdle from the zero at which it has flatlined for some 14 years.

But it is a realistic debate to pursue, and one we have to imagine has the New England Patriots in a state of inner turmoil.

Should they explore trading Tom Brady?

Brady set a Super Bowl record for completions and won his third Super Bowl MVP.  I think the Pats made the right decision to hold on to him.

And before we go, it’s worth lifting up at least one person who didn’t rush to judgment.  Take a bow Erik Frenz of the Boston Globe, who said on October 1st when the world was crashing down on the Patriots dynasty, “Don’t Write Off The Patriots Just Yet.”