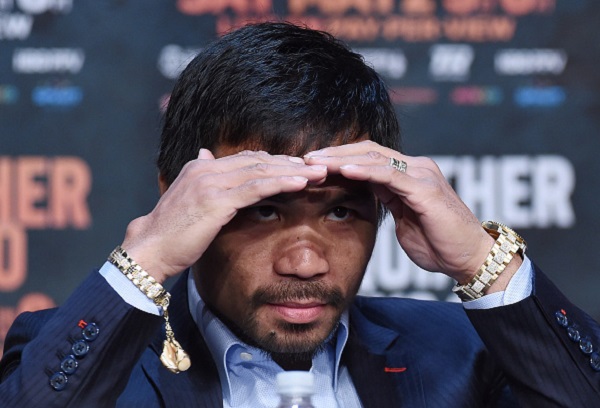 Not disclosing his shoulder injury going into the May 2 fight versus Floyd Mayweather already has Manny Pacquiao facing penalties from the Nevada Athletic Commission. The boxer may be fined or suspended for not saying he was injured on a questionnaire filled out before the match. Pacquiao suffered a torn rotator cuff that will require surgery and keep him out of the ring for nine to 12 months.

But the decision to fight Mayweather despite being less than 100 percent could also result in other issues for Pacquiao. Two Las Vegas residents, Stephane Vanel and Kami Rahbaran, have filed a class-action lawsuit against the boxer, his manager and fight promoters, contending that those parties knew about Pacquiao’s shoulder injury beforehand, and broke the law by not revealing the injury to the Nevada Athletic Commission. The plantiffs are seeking $5 million.

The suit also asserts that Pacquiao, his representative and promoters committed fraud by keeping news of the injury from fans who bought tickets, purchased the fight on pay-per-view and placed bets on the outcome. Under those circumstances, the fight was not correctly promoted and was not a fair contest with one of the participants nursing a serious injury. The plaintiffs argue that was a violation of Nevada’s Deceptive Trade Practices Act.

Revenues from pay-per-view sales are estimated to exceed $300 million, while bets placed on the fight could top $60 million. Tickets for the event are expected to result in $72 million worth of sales.

“Defendants prior to and at the time the plaintiffs and the class decided to purchase tickets; purchase pay per view showings or wagered on the event the defendants knew and had full knowledge and information that defendant Pacquiao had been seriously injured and was suffering from a torn rotator cuff,” the lawsuit says, as quoted by ESPN’s Darren Rovell. “Defendants further know that such injury would severely affect his performance.”

Named in the lawsuit are Pacquiao and his manager Michael Koncz, along with promotional company Top Rank Boxing, chairman Bob Arum and president Todd duBoef. And now, a new report today from ESPN says that Pacquiao and the promoters are facing up to five class-action suits.

As you might expect, Top Rank takes issue with accusations that it knowingly promoted a match in which one of the boxers was physically incapable of fighting at full capacity. The promoter’s lawyer, Daniel Petrocelli, said Pacquiao was examined before the bout and deemed fit to participate. Whether or not the public knew about a shoulder that was re-injured during the fight does not matter, making this “a frivolous lawsuit” that “will be dismissed,” in his words.

“The allegations in this lawsuit are demonstrably false,” Petrocelli added. “There are documents that explicitly show the medications that Manny was using to treat his shoulder and it was fully disclosed with USADA, which we contracted for this fight.”

The documents for the lawsuit are available to be read online, courtesy of KLAS-TV in Las Vegas.