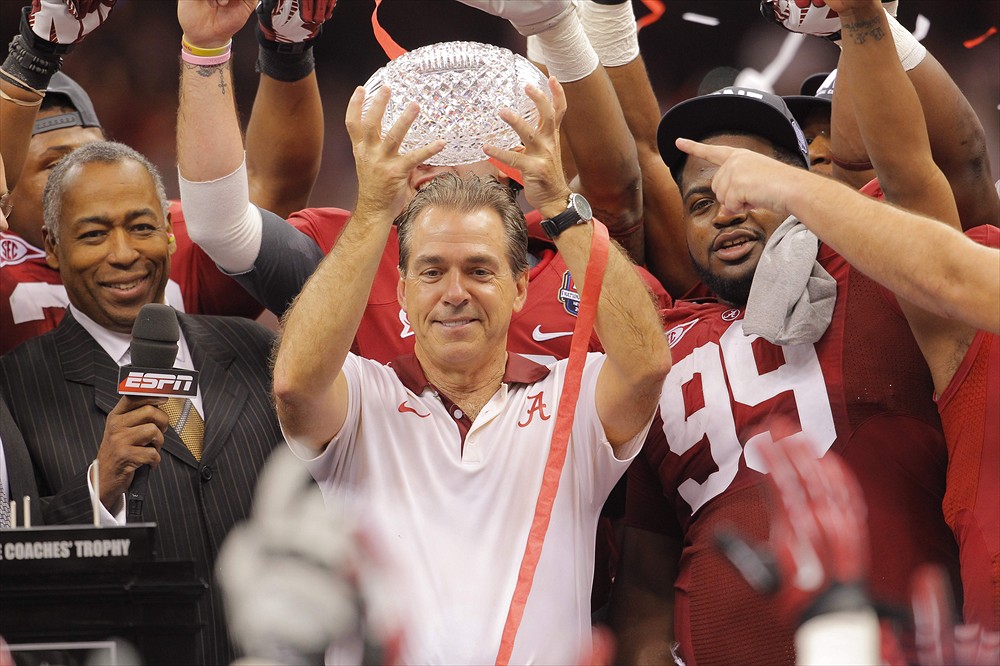 Even though the Crimson Tide overpowered the Bayou Bengals last Saturday, taking command of the proceedings well before 60 minutes (no, not the CBS broadcast) had run their course, Black Rock pulled in the best Saturday rating of the college football regular season. The 6.4 overnight bested the very successful Florida State-Clemson game from the day’s 3:30 Eastern time window.

Only one game this season has attained a higher rating than Tide-Tigers: Ohio State’s season-opening win over Virginia Tech, played on Labor Day. That contest posted a 6.6 rating.

CBS, though, occupies first place for any Saturday broadcast to this point in 2015.

I had written last week that LSU-Alabama might be an underappreciated rivalry in terms of its competitive centrality in college football. This rivalry doesn’t have the nationwide stature of Auburn-Alabama or Michigan-Ohio State. Framed more precisely, it’s a hugely significant rivalry, but it’s not part of rivalry weekend or the Thanksgiving holiday which often accompanies it. LSU-Alabama isn’t the grand finale to the regular season the way the Iron Bowl often is.

Even though LSU and Alabama are two of the four schools which have owned the SEC over the past decade, their annual duel is not as celebrated as others across the country. Moreover, it’s not as though this game is usually close when played away from Baton Rouge. Alabama has pulverized LSU in each of the last two meetings in Tuscaloosa (not to mention a separate beatdown in New Orleans). Therefore, why has this rivalry made such an impression on viewers?

First, while early November isn’t quite the same as late November, the timing of LSU-Alabama is late enough in the season that if both teams are in the national championship hunt, the event feels like a pendulum-swinging occasion… even though Alabama overcame the 2011 loss to reach, and then win, the national title game.

Speaking of that, there’s no question that the 2012 BCS National Championship Game rematch brought the clash to a new level in terms of visibility and saturation coverage on ESPN and everywhere else. This added to the heightened stature of the rivalry once Nick Saban — formerly a national championship coach at LSU — jumped to the other side with the Tide in 2007.

Keep this point in mind about LSU and Alabama, along with college football viewing habits in generall: Their 2011 rematch represented, in many ways, the zenith of the SEC and — simultaneously — the height of anti-SEC sentiment, more than anything we’ve seen in subsequent years. This branches out into a larger point beyond the SEC.

Given that Florida State has been a ratings magnet for ABC — the Seminoles’ losses to Clemson this past Saturday and (in 2012) to Florida have been ABC’s best 3:30 ratings-getters over the past four years. What you might privately think to be true has in fact been affirmed: People do indeed “hate-watch” some games. In other words, they watch in order to root against teams or conferences. They’re not just rooting for someone.

Villains, real or perceived, make for compelling television and bigger ratings. The SEC is a villain to anyone outside the conference. Nick Saban is also a villain just because he’s turned Alabama into one of the sport’s few Goliaths (the others being Florida State and Ohio State). Those details and others have created the special sauce for CBS in prime time with LSU and Alabama.

Long story short: A convergence of factors has made this the most important annual game in college football over the past five years, in much the same way that Miami-Florida State (not played near Thanksgiving, and not a “traditional” rivalry on par with the Iron Bowl, Michigan-Ohio State, or USC-UCLA) held the distinction from 1987 through 2001.

That level of significance, it is instructive to note, has translated into ratings… even if the game is not always close, as was the case Saturday night.