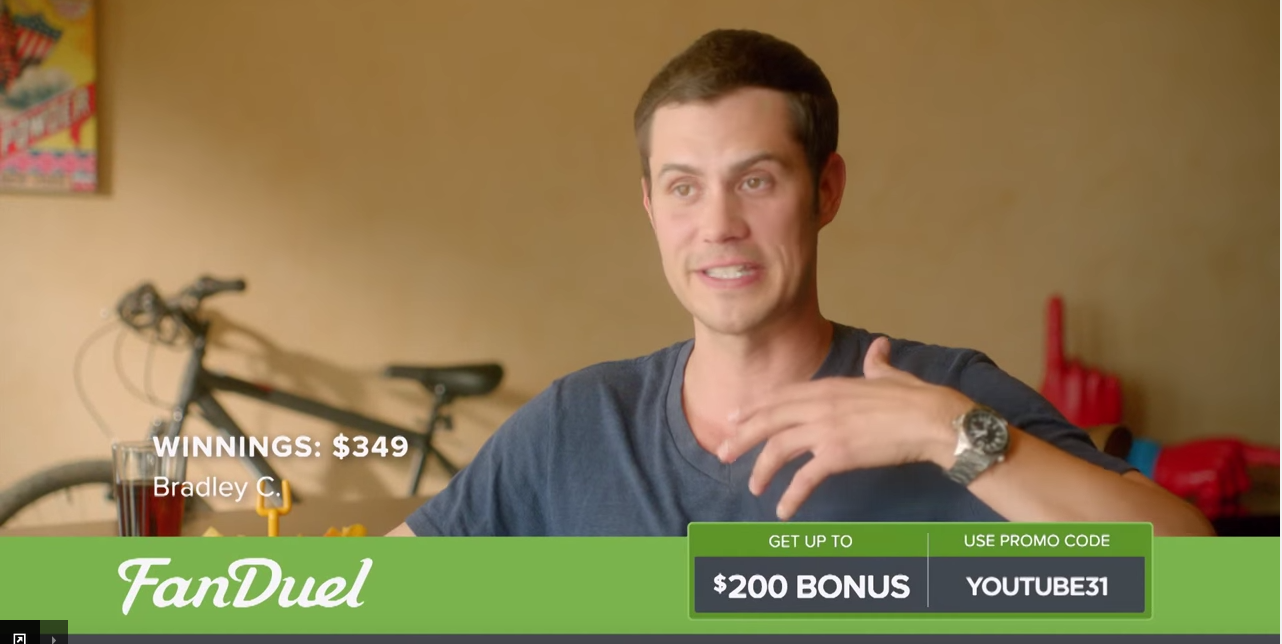 FanDuel, typically the less evil of the big two daily fantasy companies and with the less obnoxious advertising (barely), has a pretty straight forward ad strategy. No fancy endorsers, no glitzy produced ads, and no jingles, but rather just product shots and user testimonials (although it should noted they’re facing some scrutiny for using NCAA player images without consent in new ads).

While my brain typically shuts off entirely when not nimble enough to flip to another channel or find something on my phone to read, lately I’ve been keying in on one of the campaign’s stars, Bradley C. Oddly, Bradley C is sprinkled into a handful of FanDuel commercials among the testimonials of players who have won tens of thousands, hundreds of thousands and even millions of dollars of prize money.  How much has Bradley C won?  A cool $349.  Just enough money to pay for DirecTV’s Sunday Ticket Max package which includes the commercial-less Redzone Channel which is brought to you by FanDuel.

To some degree, I give FanDuel credit for not fibbing about how much Bradley C has won, which would have been easy. But how did he get into this commercial to start with? Some theories:

– FanDuel is trying to promote that low stakes players can win as well.

– Bradley C knows someone at the ad agency who produced these commercials.

– He was a big winner and then blew the bulk of his winnings in between when he agreed to do the spot and when was this filmed.

– The ad agency only could film people in one city and only got a handful of people to agree to do testimonials and were stuck with big time $ Bradley C.

– FanDuel was selective in people they’d want promoting their brand and opted for a certain cleaner, younger, hipper, and fitter look rather than some of schlubs who make up their user-base and general sports fan demographic.

We’re dying to solve the mystery about Bradley C, who at this point is likely to have lost his $350 and is probably pawning off stuff and donating plasma to keep playing. Below, some random tweets on our man Bradley, who many others wondered about or were slightly jealous of because he gets a national ad campaign for winning less money than you did getting second in your fantasy league last year.

I want to punch Bradley C from the #FanDuel commercials in the face.

Bradley c in the fan duel commercial…hit a sis up

Bradley C. who has won $349 is clearly on Fan Duel commercials because he can read lines, unlike other winners.

Why does @FanDuel think I care about Bradley C. winning $349?

How does Bradley C get on a @FanDuel commercial by having $349 in career winnings? How has that changed your Sunday's Brad?

Bradley C won $349 on Fanduel. Wow! Impressive. And looks like a dork besides. I make more than that in a hour. Fool.

If @FanDuel is gonna make me watch their commercials, can they at least show the ones with my idol Bradley C??

@DraftKings how pathetic is Bradley C. On the @FanDuel commercial only winning $349

Every week I can win money on fanduel – Bradley C.
But you don't because your lifetime winnings are $349
The commercials are out of control

What a D-Bag "Bradley C" is on @FanDuel commercials, "every week I take my buddies money, I am up to $349, Im the fucking shit"

I hope 'Bradley C.' who wins his 'friends' money every week on FanDuel is the loneliest soul on earth.

I have no idea why #Bradley C." and his massive $349 in winnings is featured in FanDuel commercials.

This post was brought to you by DraftKings (not really).