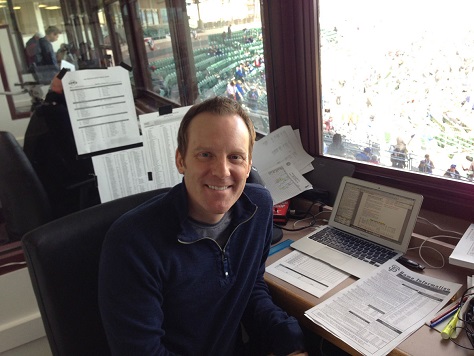 Chicago Cubs play by play man Len Kasper is one of the brightest announcers in baseball.  He uses analytics, he interacts with fans, he’s everything you want in a modern day baseball announcer.  Kasper and analyst Jim Deshaies form one of the most enjoyable local broadcast teams in the country and they fill the shoes of some legendary Cubs broadcasters quite well.

One of the more modernish things that Kasper does that doesn’t align exactly with the antiquated UNWRITTEN RULES OF BASEBALL is inform the viewing audience about a no-hitter in progress.  Kasper *gasp!* actually uses the words “no-hitter” on the air instead of dancing around the topic in strange ways.  In other words, he completely disregards the existence of the announcers’ jinx.

So when Jon Lester’s attempt at a no-hitter was broken up in the 8th inning over the weekend, you just knew Kasper was going to get some of the blame thanks to the belief in the jinx.  Kasper RT’d these tweets into his Twitter feed from perturbed Cubs fans:

@Cubs Just blame it on @LenKasper

Do you need to ask? @LenKasper That guy jinxes EVERYTHING… RT@Cubs: WHO JINXED IT

@LenKasper you jack ass, you never talk about a no-hitter DURING A NO-HITTER

Amazingly enough, this was the second time this month that Kasper had to defend himself against an onslaught of tweets blaming him for ending a Jon Lester no-hit bid.  Back on July 7th, Lester took a no-hitter into the 7th inning when it was eventually broken up.  That’s when Kasper went to Twitter to explain himself:

That last tweet is the key point because Kasper has called no-hitters before when he supposedly should have jinxed them.  In fact, I’m sure there’s been lots of examples of the dreaded no-hitter jinx turning out not to be true.  If you believe in announcers actually having a tangible impact on what happens on a baseball diamond, you might as well believe that the guys on Finding Bigfoot are actually going to find The Yeti.  It’s nothing more than myth.  But because it’s a part of baseball lore or the unwritten rules or whatever it’s just always been that way.

The debate about announcers jinxing no-hitters should have ended several decades ago.  It was all the way back in 1960 that the greatest baseball announcer in history, Vin Scully, said that the superstitious belief was pure balderdash.  More than that though, it actually betrayed his play by play duties:

“It’s insulting the listeners to make them think they’re silly and superstitious enough to believe my telling them that a no-hitter is going will affect the game,” Scully told The Times’ Don Page.

“You see, no one expects a listener to hang on to every word for three hours. They leave the radio from time to time and this service must be rendered.”

In our world of shortening attention spans, shouldn’t that last point be further emphasized today?  Shouldn’t it be more imperative that broadcasters are always on top of history in the making and communicating it to viewers so as to not lose fans that might be just passing through?

So please, baseball fans, stop blaming announcers for “jinxing” no-hitters.  And leave Len Kasper alone when he’s just trying to do his job.