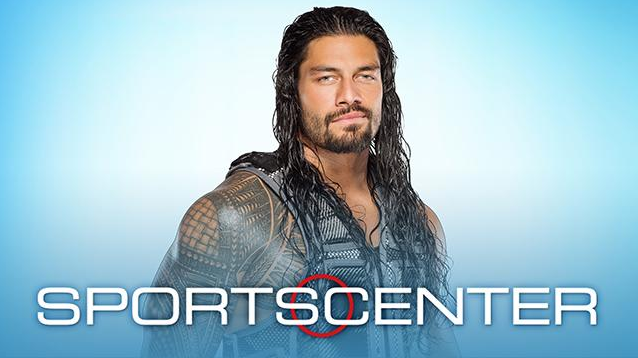 Once upon a time, I used to blog more frequently about things going on in the sports media/sports technology space. I’m told people liked it and after much procrastination, today it returns as a monthly column that will look at things we may have overlooked over the last month. With that in mind, here are some things I’d like to share with you wonderful people.

Yesterday Richard Deitsch passed along comment from ESPN that the WWE has not been paying for the recent surge of coverage the company has been getting. Many have speculated on this front as ESPN has gone from mostly ignoring WWE to suddenly blending it into their coverage mix across multiple platforms and shows. One possible answer that we’ve heard is that it’s just simply ESPN giving their viewers what they want. What do I mean by that?

We’ve heard, as well as confirmed, that ESPN is a customer of Spredfast, a social media monitoring company.  A high level explanation of what they do from their website:

“By intelligently integrating social into your overall content strategy, we enable you to build awareness, drive conversions, and increase engagement to effectively reach audiences everywhere.”

Basically, Spredfast helps you figure out what your social followers are talking about and then you’re better able to craft content for that audience. We can find evidence of ESPN being a happy customer as early as 2013, but that may have potentially been a pilot implementation or a departmental implementation.

We’re told that in a demo of the service the week of the Ultimate Warrior’s passing, ESPN was blown away just how much their followers were engaging about that compared to traditional sports stories. Since this realization of the WWE’s popularity among their followers, ESPN has tinkered with more WWE coverage and continued tracking social chatter and has essentially found that having some component of wrestling coverage was something viewers wanted and they weren’t delivering. Putting two and two together, perhaps the increase in WWE coverage has been an effort on their behalf to deliver programming to match the interest from their built-in viewership.

Given nobody seems to have a line on this one and given Spreadfast’s product and ESPN’s documented usage of it, maybe the answer is just this simple.

Nobody draws more ire than Phil Simms from our Twitter followers. We don’t need to do a deep dive into why Simms seems to grate on almost all football fans more than anyone else, but suffice to say there seems to be a pretty strong consensus that he detracts from the viewing experience. But making a change to any national top team broadcast booth is quite messy and with a lot of politics involved.

"Take your timeouts and stop the clock. In other words, if you don't take those timeouts, time goes off the clock." #analysis #MINvsAZ

We’re unsure exactly when Simms’ CBS contract expires but we do know that most of the lead team NFL announcers at the networks have their contracts tied to years in which their network broadcasts the Super Bowl.  The thinking here is that Simms current deal would either be ending this season or after the the 2019 Super Bowl on CBS (a scary thought). But CBS doesn’t have anyone internally that they’d feel comfortable elevating and it’s unclear if anyone from another network might magically happen to be a free agent after this season that they’d be interested in.

If Peyton Manning was indeed going to retire, CBS would mobilize here to replace Simms with Manning. With that said, it’s not clear Manning will actually retire at this point and there is a lot of skepticism he’d go into broadcasting as many speculate his interest is in team ownership and other business ventures. Jon Gruden is rumored to be ESPN’s highest paid employee at around $6 million a year, which inlcludes Gruden’s QB Camp and NFL Draft coverage. I’m almost inclined to start a KickStarter to raise funds for CBS to replace Simms with Manning but ultimately while it seems like a tangible solution, I’m guessing Manning’s earning potential elsewhere is going to prevent this from happening but we can all hope.

As for Mike Carey, it would really be hard to understand his return for a third season given the VERY dicey track record as CBS’s officiating expert.

Got some news of a personal nature here. I'm leaving my FT role at @voxmediainc but will stay on in an advisory role https://t.co/ROfRatQNfW

Many readers may not know the name Tyler Bleszinski off the top of their heads, but he’s one of the more impactful and influential people when it comes to the rise of new media in sports. Bleszinski is the founder of Athletics Nation, which grew into SB Nation, which grew into Vox Media. Bleszinski was SB Nation’s first CEO and led the company on the trajectory to where it is today as a major player in sports media. He announced this week that he’s leaving his full-time duties at Vox to spend more time with his family.

Re-designs at FTW and TBL

Correction, FTW has been on it’s current design since May with TBL adopting the new look now.

USA Today’s FTW and The Big Lead both got snazzy matching redesigns last month. Tech and design is a pain-point for a lot of publishers (us included) so it’s good to see both those popular websites tackling that dilemma together under the USA Today umbrella. One thing that caught my eye was The Big Lead’s logo and secondary color flip from red to blue. My guess is that because the sites now share the same design, it was deemed a good idea for one of the sites to adopt blue as both sites had similar red usage in the logo and as a link colors on the site. Probably a smart choice, but something that takes a little time to acclimate to. None the less, always good to see popular sites continue to evolve from a design perspective.

30 for 30 Shorts used to debut on Grantland and via Youtube which raises some questions given Grantland is done and ESPN has pulled all of their content from YouTube due to an ongoing conflict about ESPN’s participation in a YouTube subscription service.

So does that change the strategy for 30 For 30 Shorts? I had some concern there but have been told by a couple of people they don’t perceive much will change, which is good news if you’re a fan of the shorter form documentary series. Another thing I’m hearing is the reported Mike Francesa 30 for 30 may actually be a 30 for 30 short. We’ll see.

Pour Out Some Liquor For Grantland’s Social Channels 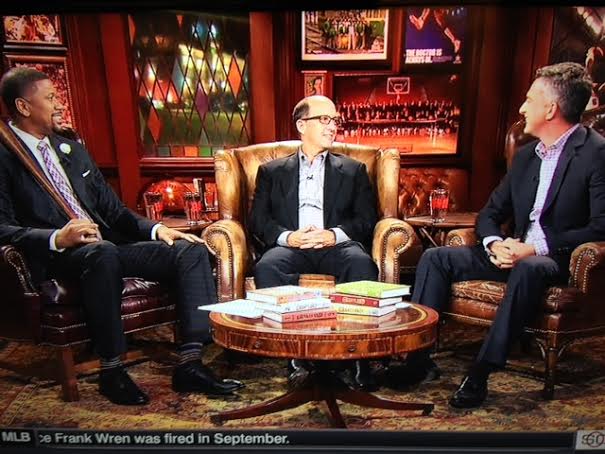 I had quite a candid lamenting of ESPN’s shuttering of Grantland, a decision that continues to baffle me given just how many people have conveyed to me it was the corporate brand’s only positive touchpoint with younger readers. One thing that I ignored in that article is how unfortunate it is for ESPN to amass such a large social following for the site only for those social channels to essentially be decommissioned and left to collect dust. For anyone in the web content business, it’s tough to stomach the fact that ESPN has sizable and valuable assets in Grantland’s 350,000+ Facebook page likes and over a half a million twitter followers only to see them become dormant. Below is a screenshot of social followings I collected a couple of weeks back, listing Grantland with some comparable brands to put Grantland’s social traction in perspective. 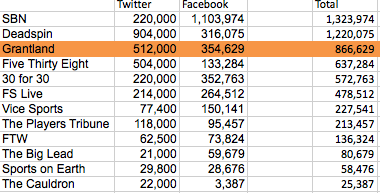 ESPN doesn’t really have any low hanging fruit to repurpose these accounts into but you just rarely see accounts of this size effectively “go dark” because of their value on paper and clear signaling of the brand’s popularity.

I, like many, am not particularly fond of Notre Dame, yet I couldn’t help but find myself warming to the Fighting Irish while watching Showtime’s all access weekly show. The production quality and budget blew away similar efforts at conference owned networks to the point where it was in the same punching class as Hard Knocks – the only big difference being it was a thirty minute program and more importantly it followed the team beyond the preseason. Being a big football fan, I ate it up and it got similar reactions when I played a few minutes for friends.

Now all that said, I think viewership for the series mirrored a lot of sports programming on Showtime in that it wasn’t heavily watched and failed to garner much buzz online and socially. A shame, given the quality of the show and more specifically the compelling season Notre Dame has had this year.

I hope the show gets picked up next year (potentially with a new team), but more so I hope Showtime gets a little bit more aggressive, creative, and proactive in promoting their sports content as this has long been a problem for the network and one that hasn’t gone unnoticed by industry observers as well as content creators. Lucky for you there are some full episodes online if you’re curious what you you missed.

Bill Simmons HBO Show About…….Sports?
It will be interesting to hear more about the show as we get closer to the debut. One particular question mark is in regards to the mix of content between sports and pop culture the show will have and more specifically – will the show be under HBO Sports purview or just HBO.
Some think that because the bulk of HBO Sports is in New York opposed to LA (where Simmons is based), that ultimately the show may drift to being a HBO property and not a HBO Sports property. Obviously, the show will have some type of content mix, but let’s not forget Simmons wasn’t exactly endearing himself to the old guard at HBO Sports with his repeated comments on wanting to “destroy them”.
Simmons hasn’t exactly conquered television so given the unchartered territory for him and HBO’s high bar in the wake of the successful launch of Last Week Tonight, it will be one of the bigger stories of 2016 to see how this marriage starts off.
That’s it for now folks. Look for a new column in early 2016. Until then, happy holidays and thanks for your support of Awful Announcing and hopefully The Comeback as well.