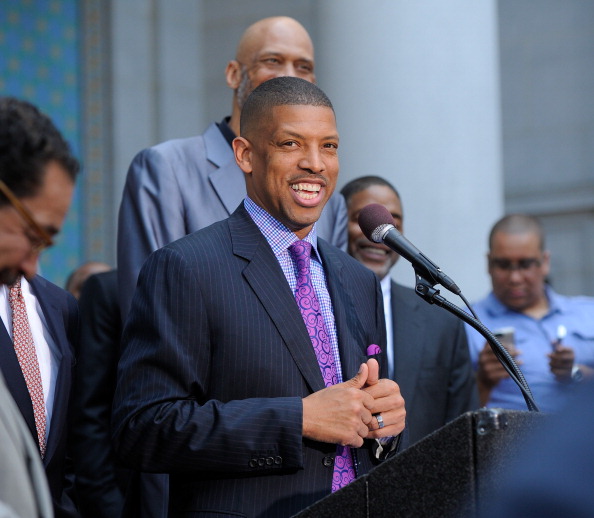 The national response to Deadspin’s interview with the woman who accused former NBA star and current Sacramento mayor Kevin Johnson of sexual abuse in 1996 when she was a teenager and subsequent posting of the video of her interview by Phoenix police has been significant, most prominently with ESPN pulling the upcoming 30 For 30 documentary Down In The Valley on Sacramento’s fight to keep the Kings thanks to the allegations against Johnson (who’s a central figure in the film). In Sacramento, though, the response has been quite different, with many talking about how these allegations have been extensively covered before. A local screening of the film went ahead as planned Monday, and Deadspin’s Patrick Redford attended; as he writes, Johnson tried to keep questions focused on the movie and attempted to downplay the allegations against him:

Ben Sosenko, press secretary to the Sacramento mayor’s office, corralled the media together about 10 minutes before Johnson showed up. He told us, briefly, what he wanted us to ask Johnson about. This was always supposed to be a victory lap for him and the other key figures in getting Sacramento to pay a quarter of a billion dollars in public funds for a new stadium, and they wanted to keep it that way. The mayor, we were told, only wanted to talk about the contents of Down In The Valley—not the quarantine in which ESPN had placed the movie, and certainly not the consistent pattern of women accusing him of sexual abuse. It didn’t work out for them.

Kevin Johnson, when he turned up, was repeatedly asked about the abuse allegations. He evaded every hard question and threw back only circumspect talking points. The only elaboration he gave was on whether or not he will seek a third mayoral term, and he gave the same defense as ever to questions about his alleged abuse of a teenager, which is, in summary, that people accuse you of all kinds of stuff when you’re famous. He didn’t want to talk about it, but he never broke his practiced calm. It was quite a performance.

Here’s video Redford posted of Johnson’s interview outside the theatre:

Johnson’s calm in the face of this kind of storm is remarkable, but as Marcos Breton of The Sacramento Bee writes, he’s been dealing with this particular storm for quite some time on at least the local level, and it hasn’t stopped his high-profile ascension:

Her words have been noted in police transcripts that have been public for a very long time. They have been available to Bee readers on Sacbee.com since 2008, when Johnson was first running for mayor. Anyone living in Sacramento or following Johnson’s candidacy could have been aware of this dark moment in his past.

Johnson was elected mayor by a wide margin anyway. He was re-elected by Sacramento voters in 2012. He became president of the U.S. Conference of Mayors, received invitations to state dinners hosted by President Barack Obama. Johnson was showered with favorable national attention in summer of 2014, when he led NBA players in a movement resulting in the ouster of Los Angeles Clippers owner Donald Sterling. Johnson voiced player disgust after Sterling had been caught on tape making racist comments.

The first African American mayor of Sacramento has achieved renown and access to power rarely attained by mayors of midsize cities. He did it all with the Phoenix accusation looming in the public domain.

Of course, this time could be a little different, with the video in particular causing many political analysts to say these accusations could harm a potential re-election bid from Johnson. The chair of the Sacramento County Democratic Party made some especially pointed comments about him to the Bee‘s Ryan Lillis:

Kerri Asbury, chairwoman of the Democratic Party of Sacramento County, told The Sacramento Bee on Tuesday she thinks Johnson should resign so that “the focus returns to the city’s needs and not more reports of impropriety.”

Asbury said the party’s executive board has not taken a formal position on Johnson’s future and likely won’t until at least its Nov. 12 meeting. However, after speaking to other members of the party’s leadership, she said, “If I were putting down money on which way the committee would go, I would bet on a call for resignation.”

“At a minimum, I think he needs to not seek re-election,” Asbury said. “I feel the integrity of the mayor’s office has been broken.” …

She said the video has added a new dynamic to the situation.

“When you see how young she is (in the video), it legitimizes it in a way,” she said. “I do think anytime in an investigation that you see a video, it changes your perspective.”

As Lillis notes, though, the local Democratic Party has never endorsed Johnson (who runs as a Democrat) thanks to other scandals he’s been embroiled with charter schools (which also include allegations of molestation) and actively campaigned against a measure to give him greater powers last year. So, this may be local opposition increasing in furor, but not in size.

Regardless of what happens locally, though, the future of the Down In The Valley 30 For 30 appears very much up in the air. Here’s what ESPN vice president and executive producer of ESPN Films and Original Content John Dahl told Breton Monday:

John Dahl, vice president and executive producer of ESPN Films and Original Content, said Monday that the network had to pause and reflect on its film in light of the video released by Deadspin.

“It’s fair to say that the new material, in terms of putting a name and a face on … the accuser … (caused ESPN) to acknowledge and address (it),” Dahl said Monday.

“We will be looking at presentation and content and how we can deal with these matters in a fair and responsible way,” he said.

Dahl said ESPN was committed to releasing the film in the future, but that the network could not set a release date until it settled on a way to update its finished product in light of the Koba video.

So, we’ll see if and when this film is ever aired nationally, and what it looks like if it is. Johnson doesn’t seem too concerned, though, considering what he told reporters Monday night:
“There’s nothing and no one who can rain on this parade.”
(Update: As per the discrepancy between Deadspin’s coverage and local coverage of this case, that’s explored in this segment from local TV station CBS 13, which includes a profanity-filled response from Deadspin editor Tim Marchman.

It’s not the first time Marchman has gone off on someone, but it certainly makes for something different than your typical local news segment.)