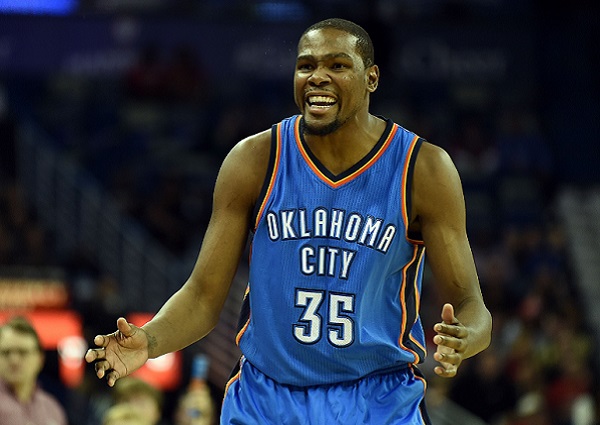 On Tuesday’s First Take, Stephen A. Smith said he had been hearing that talk that Kevin Durant could end up with the Lakers as a free agent if he doesn’t re-sign with the Thunder.

“Regardless of how senseless it may (sound),” Smith said (as transcribed by The Oklahoman‘s Anthony Slater). “In one breath I’m hearing that if Kevin Durant doesn’t stay in Oklahoma City, L.A. is his primary objective and landing spot as opposed to South Beach or even his home of Washington, D.C.”

“I heard Melo, Kevin Durant, Kobe,” Smith continued. “And when you take into account that Phil Jackson is on the record saying it might be Kobe’s last year in L.A. — opening the door that there are possibilities for him to go elsewhere. All I’m saying is you just never know.”

Bold stuff. And such a hot rumor that it was apparently news to Durant himself. The forward spoke to reporters, including Slater, after practice about what Stephen A. was hearing from his sources. To put it mildly, he questioned the validity of those rumors.

My full interaction with Kevin Durant on the Stephen A Smith rumors pic.twitter.com/83n89hKIvl

That’s even bolder stuff. And kind of reminiscent of Mark Cuban calling out Stephen A.’s colleague, Chris Broussard, in July for reporting that the Mavericks owner was frantically driving around Houston looking for DeAndre Jordan’s address when the center was on the verge of reneging on his free agent agreement with Dallas.

But Durant has to expect rumblings like this with his impending free agency, right? Wizards fans are certainly hoping the D.C. native returns home, while the Heat is also rumored to be eyeing a run at him.

“If you ask me a question, I’ll talk about them,” Durant told Slater. “But like I said before, I have people who I talk to about everything and I know for a fact they didn’t talk to him, so he’s making up stories.”

News of Durant calling Stephen A. a liar reached the ESPN personality and he responded to the accusation on Twitter, where 140 characters could not contain his

“Regarding @KDTrey5 and his negative comments about me, let me say this: At NO time did I ever say I SPOKE to K.D. Or his family. Or his brother, friends, teammates, etc. (although I can assure you all I have on several occasions in the past). I said I HEARD from folks I know — in a league I’ve been covering for 19 years — that if he were to leave OKC as a free agent, these are the cities I was told he was considering. OKC. LA. Miami. DC. NY. I stand by it all. And that is that.

“His assertion that I was lying is not only FALSE, but totally uncalled for. Especially from a player who receives nothing but praise not only from me, but from practically every media member you can find. Yet, for some reason, we’re all the same folks who don’t know *&%$ about the game of basketball. Whose thoughts he could give a &^%$ about. Essentially, individuals he wishes he’d never have to talk to…..that he’s being forced to tolerate…..as if someone has done something to him…..OF ALL PEOPLE!”

Stephen A. went on to wag his finger at Durant, saying he doesn’t know “what has happened to [him] over the years,” and just because he didn’t talk to Durant doesn’t mean he can’t talk about him. Technically, he is correct, though the implication that he’s hearing such things about Durant would indicate that such information is from people close to the star.

But you can see where Durant is coming from. If Stephen A. didn’t talk to anyone in a position to actually know Durant’s thinking, then how can he throw that out there on TV with any certainty? And therein lies the point, it seems.

Regardless, Stephen A. promised to address this on Monday’s First Take, so plan your morning (or set your DVR) accordingly.