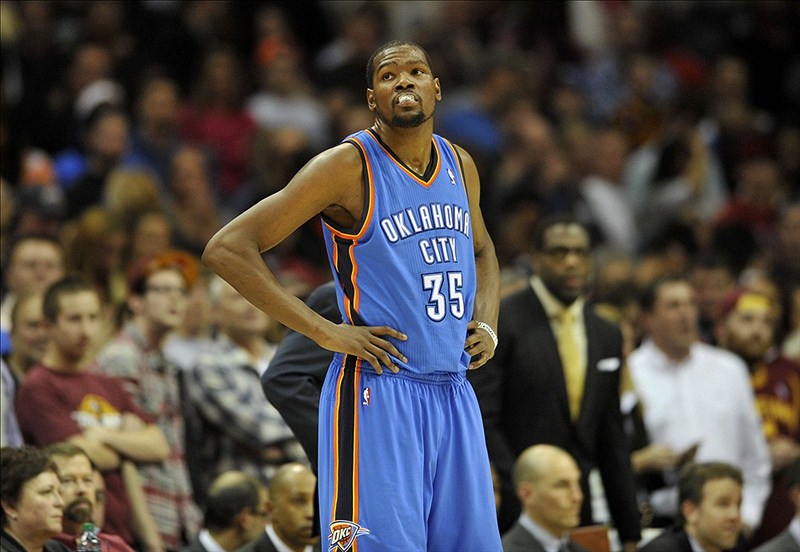 As we’ve discussed on this site, the relationship between professional athletes and the media that covers them daily is coarsening across sports.  While Marshawn Lynch has received most of the headlines in this department, we’re seeing more athletes speaking out against the media.

OKC Thunder superstar Kevin Durant is the latest and biggest name to tell the world how he truly feels.  Here’s the quote from All-Star Weekend via Darnell Mayberry in The Oklahoman.  Durant expressed his disgust with questions about head coach Scott Brooks’ job perhaps being in jeopardy with the Thunder sitting in 9th place in the West:

Durant was later asked what stories he would like the media to focus on more.

“To be honest, man, I’m only here talking to y’all because I have to,” Durant said. “So I really don’t care. Y’all not my friends. You’re going to write what you want to write. You’re going to love us one day and hate us the next. That’s a part of it. So I just learn how to deal with y’all.”

Although Durant has been one of the league’s most popular superstars over the past several years, his relationship with the media (especially locally in OKC) is more complicated than you might believe.  Let’s not forget The Oklahoman headline that labeled Durant “Mr. Unreliable” just last year.  One can imagine that a headline like that would get under anyone’s skin.  And it might explain Durant’s newfound outspokenness against the media.  As Mayberry observes, Durant blasted critics in a longform profile at USA Today regarding his decision to not play for Team USA:

“Seriously, to be honest, I was like ‘(expletive) ’em.’ You can write that, too. Seriously, though. I’m just going to be me, man, and that’s how I felt.

“I was happy I took the hits, like, ‘All right, that’s going to teach me to be strong and not worry about what everybody has got to say.’ I heard it all — ‘you don’t care about your country’ to ‘you’re soft’ to all of that. Well I don’t care. These people don’t know me. They don’t know the work I’ve put in. They don’t know that I’ve done (the FIBA tournament) before, so it made me stronger.”

And more recently, Durant tweeted an NBA writer to tell him how he felt directly when he criticized the Thunder giving a contract extension to Nick Collison:

You want evidence of that?  These quotes from Durant the day before the “you don’t know blank” mini-rant are some of the most compelling and reasoned remarks you’ll see from an athlete.  Unfortunately, they’re only getting about .001% of the publicity.  And while they might not be as worthy of a blog headline, they get to the real crux of the matter.  Here, Durant makes the case why the media has too much power in voting for awards and why the players should have more say in the process.  It’s very hard to disagree with his reasoning here:

“Yeah, I think media and guys get too much power to vote on stuff that quite frankly I don’t think you really know a lot about (or) as much as we (players) know about it,” Durant said. “So, yeah, we play against these guys every single night. We battle against these guys. We know what they say on the court. We know how they handle their teammates. We know how they approach the game, and our vote should count. Our opinions should count. Like I said, I don’t think you guys know as much as we do, and I don’t see why you have more power than we do.”

Asked what media members are missing that players know, Durant pointed to the players’ various personalities and tendencies.

“We really know these guys inside and out,” Durant said of his fellow NBA players. “It’s a lot of guys that deserve Defensive Player of the Year or Sixth Man of the Year. But they’re not the sexier names. I think a lot of people see the names of these players but really don’t get the other guys that contribute to our game as well. You guys are not in the scouting reports. You’re not in the team meetings and film sessions to really break down these players’ games. And I don’t see why you have more power in voting than we do. I mean, we’re out there on the court playing with them. We appreciate how you guys blow the game up and how much you bring attention to the game. But at the same time, to keep it pure the players should have more say in that stuff.”

Can you imagine a world where media narratives didn’t drive everything?  Where players who maybe didn’t get the respect they deserved were recognized beyond the best dunkers and biggest names?  Sign me up.

That’s not to say the media’s role should disappear completely, and that’s not what Durant is saying at all either.  (And that’s why perhaps the glee in some circles in seeing Durant rip the media to their faces, as if he is joining Lynch in leading some kind of revolution, may be a bit overblown.)  What Durant is saying is that the media shouldn’t be the only voice that matters.  In 2015, that’s true for both fans and athletes.  For the fan, we don’t just have to depend on what the sidebar of the local paper tells us we need to think.  For the athlete, they don’t have to depend upon the reporter as messenger with the age of social media.

Now it’s just up to the media to adjust to these new realities and realize that maybe, just maybe, Kevin Durant is right.