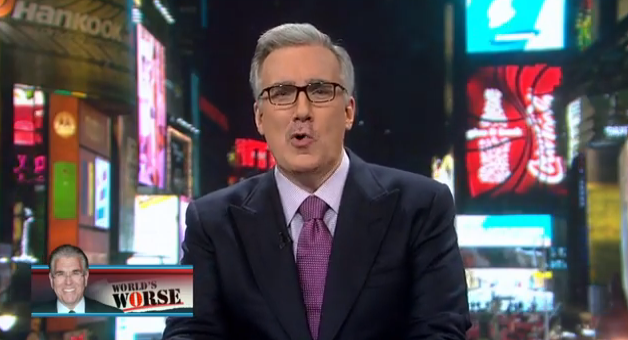 Given how cold it’s been in much of the country, maybe it’s true that hell has indeed frozen over since Keith Olbermann returned to ESPN in August of 2013.  Olbermann gracing Bristol airwaves yet again (albeit from New York) is the most improbable prodigal son story maybe in the history of sports media.  One ESPN PR staffer infamously said that Olbermann didn’t just burn bridges places, he “napalmed” them.  Bob Ley talked openly in Those Guys Have All The Fun about the “unrestrained f—ing joy” when Olbermann left.  Rece Davis quoted a coordinating producer who said everyone who wants to should get to punch Olbermann in the stomach if he ever returned.

But return he did.  And as far as we know, nobody has gut punched him…. yet.

Olbermann 2.0 at ESPN has been a success through 18 months.  His eponymous ESPN2 show has been critically well received and struck a nice balance between “fiery political Keith” and “all-time great sportscaster Keith.”  Olbermann even endured through the rockiness of never knowing when the show would air at or near its original late evening timeslot.  Now firmly entrenched in the late afternoons on ESPN2, it’s a must-see part of ESPN’s daily lineup.  The host has delivered timely, relevant commentaries, many of which have gotten widespread attention across the blogosphere and beyond.

But when it comes to Keith Olbermann, even when things are going swimmingly well there’s always the potential for a blow-up.  Olbermann’s legendary volatility caught up to him this week when he was suspended by ESPN for the week after an ugly Twitter War with Penn State students where he did battle with them over raising money for cancer research.

Now, Olbermann has had several notable feuds with other media members, Twitter Wars, and even called for Roger Goodell to resign.  The ESPN hierarchy traditionally frowns on generating such controversy (unless your name is Skip Bayless), but Olbermann had been given largely free reign.  However, the Penn State fracas is the first time where ESPN has disciplined him and judged that he stepped over the line.

In some respect, Olbermann getting suspended by ESPN is not a shocking development.  ESPN brought him in to do exactly what he has done over the last 18 months.  You can’t hire King Kong without expecting him to knock over a couple buildings.  Furthermore, given the commonality of ESPN suspensions these days perhaps this is no big deal and all things will return to normal come next Monday.  At least he was restrained enough not to debate Curt Schilling on evolution.

It’s well within reason though to wonder if this could be an inflection point in the prodigal son’s return to ESPN, though.  It’s notable that Olbermann was suspended for taking on opponents on Twitter, something he’s gleefully talked about openly in the past as “batting practice.”  From Sports Illustrated:

It’s batting practice. You ask how do I prepare for a show? In periods of transportation situations or other situations where you have surfed the ‘net and you have another 10 minutes to kill, I will get on Twitter just to see how fast I can turn these guys tweets around. Almost all of them are so ludicrously badly done. Other people have Angry Birds to play. Some people warm-up with 10 minutes on a treadmill. If I go 10 minutes on Twitter, I find my brain just a little bit sharper. It is batting practice. People say to me: “Don’t feed the trolls.” I say, “Feed the trolls.” I should pay these people.  I really should because every last one that has called me an idiot has misspelled a word. It might be 95 percent but it is amazing.

Batting practice RT @rstackjr @KeithOlbermann Why do you bother engaging with these fools?

Olbermann lives for these kinds of scraps.  There’s maybe nobody on planet earth that would enjoy playing Whack-A-Troll like Keith.  But for all the good that Twitter does and is useful for, is there any quicker way to get suspended or fired?  What happens the next time Olbermann may step over the line?  Or the time after that?

For as good as Olbermann’s ESPN2 show is, and as sunny as the relationship currently is with his employer, it’s Twitter that stands as the biggest variable in this arrangement.

The major question moving forward is whether or not we’ll see Olbermann dial back on Twitter and engage less with opponents and trolls from every fabric or society, or whether he’ll see him keep taking those swings.  Doing the former would certainly mean taking less risks in terms of his job at ESPN and reducing that combustible element.  But doing the latter would mean sacrificing a part of his who he is as a broadcaster and a personality.  Whichever way it breaks could be the deciding factor in just how long Olbermann’s ESPN renaissance lasts.