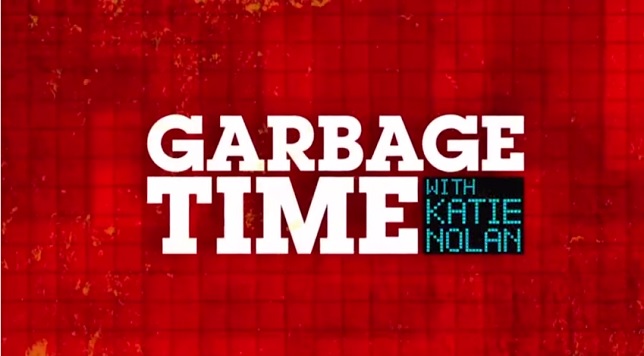 We’re now four episodes into the tenure of Fox Sports 1’s newest show, Garbage Time with Katie Nolan. And while the show still has room to grow and evolve, it’s still a breath of fresh air from the studio shows we typically see nowadays, where the takes must be piping and the controversies must be manufactured and irrelevant.

The Garbage Time format is interesting, and the show almost seems confused at times. In her opening segment, Nolan can go from cracking jokes about the latest sports news like she did on her old No Filter webshow to attacking a sensitive topic with a focused commentary like she has in the past (domestic violence, Peter King, Rick Reilly, etc). It’s Weekend Update meets Last Week Tonight, and while the diversity in content is appreciated, it almost seems too rushed.

For example, during the latest episode, Garbage Time went from short news story jokes to some funny “NFL stars in TV shows” jokes to an insightful breakdown of The Player’s Tribune in the span of the six minute opening segment. Maybe it’s a little unfocused, but it would be tough to devote an entire segment to just one of those topics.

The second segment is a more traditional interview segment, involving Nolan and a journalist. In this segment, she’s talked with Fox’s Peter Schrager about NFL free agency, SBNation’s Matt Ufford about rule changes in sports, the New Yorker’s Caitlin Kelly about drugs in sports, and Bloomberg’s Kavitha Davidson about paying college athletes. The conversations themselves are fine, though brief because of edits for time. It’s tough to have a meaningful conversation about a sensitive topic when you only have four or five minutes to work with. On the bright side, none of these discussions have resulted in hot takery and blusterous statements, which is a plus.

Segment three is an interview with a more well-known person in a different setting, as if Nolan and the guest are in the crowd at a ballgame. Through four episodes she’s interviewed Adam Carolla, Bill Raftery, Alonzo Mourning, and Harold Reynolds. The interviews are less basic, paint by numbers stuff, and more out of the box – she talked to Raftery about the best broadcasters to drink with, had Mourning teach her how to mean mug, and did a fantasy draft of fictional baseball players with Reynolds. The segments are cute, and will drive anyone looking for journalistic integrity or a hard-hitting interview insane.

The final segment of the show is generally pre-taped. Previous segments have seen Nolan parody Don Draper’s “Carousel” monologue from Mad Men to help Knicks fans, drive a zamboni at Madison Square Garden, and mimic the terrible person that runs your office March Madness pool. They’re lighthearted and shouldn’t be taken all that seriously.

All in all, there’s still work to do with Garbage Time, but early signs are encouraging. Nolan can carry the half hour show, which was a major question coming in given the shorter length of her No Filter videos, but the show is still trying to do too much. It’s jarring to go from jokes about Ray Lewis starring in “How To Get Away With Murder” to an examination of the role of athletes in the media to a discussion about paying college athletes to talking about fans jeering Cal Ripken with Harold Reynolds. Is there an easy fix? Maybe simply reordering the segments could work out well, but the way the opening segment is structured would make that difficult.

That’s not to say Garbage Time is a bad show – it’s really not. It’s quite entertaining, even if some of the jokes don’t work (which is a thing that happens in comedy). Right now, Garbage Time is simply suffering from a bit of an identity crisis, which you’d expect from a show that’s been on the air for less than a month. It almost reminds me of the chaotic early days of the dearly departed Crowd Goes Wild before CGW embraced its insanity and became a shockingly enjoyable watch.

I just hope Fox Sports 1 doesn’t pull the plug on this show too early, because it’s a great change of pace from the norm and can help Fox differentiate itself a little more. For as solid as some of their studio shows are, viewers aren’t going to turn over to the network in droves to watch a show like MLB Whiparound over Baseball Tonight or MLB Tonight. Creating and supporting unique shows like Garbage Time could help Fox Sports 1 gain more of a solid following in the future, and sticking through the growing paints is worth it.