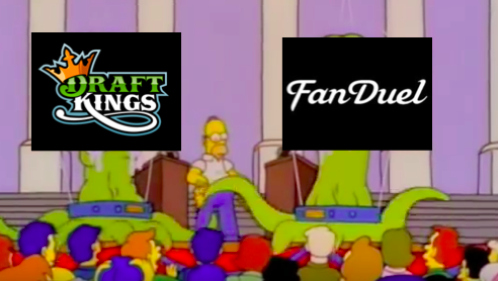 The biggest storyline coming out of Week 1 of the NFL season had nothing to do with developments on the field – it was daily fantasy companies DraftKings and FanDuel’s seemingly endless bombardment of commercials.  At times, it seemed as if the football was interrupting one long commercial for these companies.  The spending of DraftKings and FanDuel on television ads is astronomical, and maybe even unprecedented.  After not even being in existence a few years ago, DraftKings is now the #1 advertiser in all of television.  The two companies spent a combined $31 million on advertising consisting of 9,000 ads just last week.  It’s gotten so out of hand that an image like the one above isn’t too far out of the question with 2016 around the corner.

But all the furor and frustration over the proliferation of daily fantasy ads got me wondering… just how many DraftKings and FanDuel commercials would you encounter on any given NFL Sunday.  So I made the brave (or insane) decision to watch an entire day’s worth of football yesterday to witness DraftKings and FanDuel take over the world before my very eyes.  Before you completely question my sanity, I DVR’d these programs and sped through the actual games to get to the important stuff – the daily fantasy commercials.  You think I’d sit through Cowboys-Eagles again just for this study?

To cross the spectrum, I watched one programming chunk from each network – three hours of ESPN pregame coverage (Sunday NFL Insiders and Sunday NFL Countdown), the early game from CBS (Browns-Titans), the late game from Fox (Cowboys-Eagles), and NBC’s SNF game (Seahawks-Packers).  The results from 12 hours of football might surprise you…

You’re probably thinking the same thing I’m thinking… that’s it?  To be honest, I was expecting many more ads from FanDuel and DraftKings, but perhaps the perception has already outdueled the reality with how extensive these ad campaigns truly are.  Make no mistake, this is still a lot of ads – during Cowboys-Eagles you got more than 2 daily fantasy commercials a quarter.  Interestingly, there were many more ads during the first half of these games than the second half.  But at least during the games, the ads were more infrequent than you might think.

ESPN’s pregame shows on the other hand, were a much different story.  And this may be where the daily fantasy blitzkrieg is at its most powerful – not just in the commercial time, but in the deeply rooted media partnerships that these companies have acquired.

To put it bluntly, Sunday NFL Insiders was basically a DraftKings infomercial disguised as a pregame show.

On the program, each one of the personalities – Trey Wingo, Adam Schefter, Chris Mortensen, Louis Riddick, and Matthew Berry – shared their DraftKings lineup for the day.  To make matters worse, they were spread out across the show so you couldn’t get away from it.  We even had a tease heading to a commercial break with Matthew Berry at the touchscreen agonizing over his DraftKings team.  Let’s just say the phrase “target monster” is now officially part of the football lexicon. 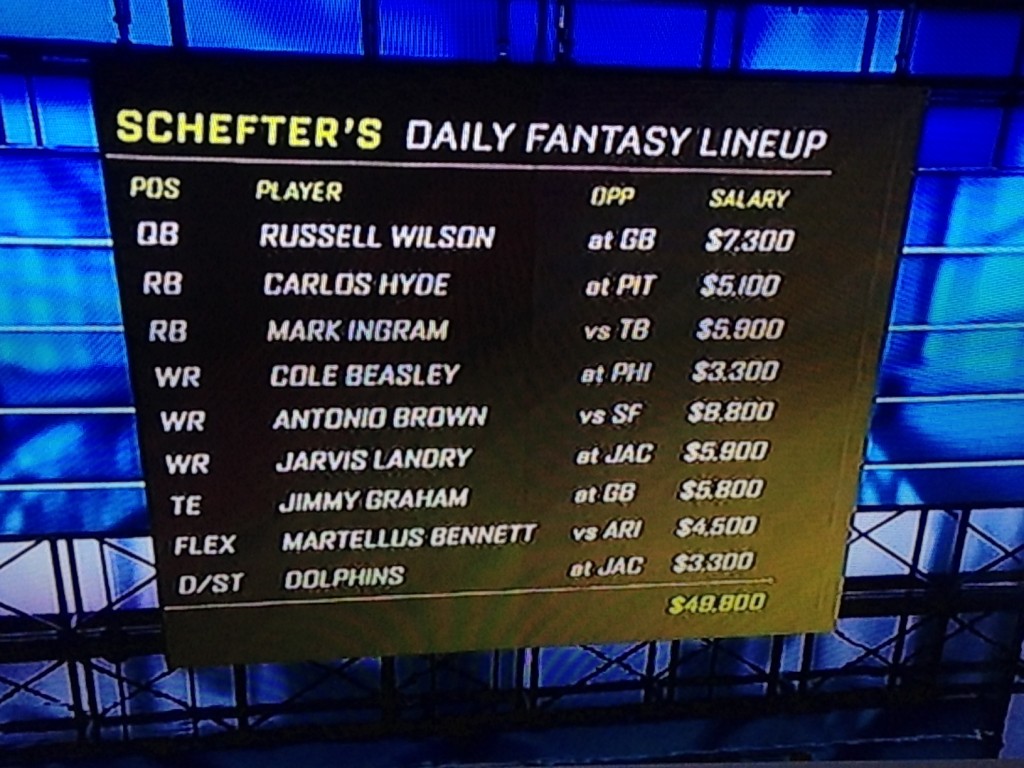 Did I mention Stephen A. Smith is on this show too?  No wonder fans are running away from Sunday morning pregame shows.  At least we didn’t get his DraftKings lineup.

Coincidentally, there were no FanDuel or DraftKings commercials on this show because DraftKings had taken over the entire program.  A huge chunk of this entire show is dedicated to the company.  In fact, I’m not surprised the name hasn’t been changed to DraftKings Sunday NFL Insiders, although given the controversy surrounding Matthew Berry and ESPN’s failure to disclose his personal endorsement, maybe Bristol thinks that would come off a little strong.

Now may be a good time to point out that when ESPN made the switch from Sunday NFL Insiders to Sunday NFL Countdown, two separate DraftKings commercials starring Berry hit the airwaves.  Berry also set another DraftKings lineup on Countdown, just in case you may have missed it an hour earlier.

Sunday NFL Countdown featured 6 FanDuel ads and 4 DraftKings ads with at least one at every commercial break.  There was also a local ad for a county fair that ended in time to see a guy holding two bags of money.  I’m guessing this was also a daily fantasy ad, but I can’t count it in the official tally.

Oh, and just for fun, these are all the promo codes that were aired on the 30 commercials I saw on Sunday.  It turns out pretty much any football-related term can be used for a free promo code.  Someone should try “buttfumble” to see if it works:

And just for fun, the 10 lines you’re most likely to hear in a DraftKings/FanDuel ad said by some bro who won anywhere from $349 to over $2 million.  Poor Bradley C. and his paltry winnings…

“Immediate cash payouts and no commitment!”

“Every week is another shot at victory!”

“Welcome to the big time!”

“Winners get paid the next day!”

“This isn’t fantasy as usual!”

“Every single week I can win money!”

If only it were that easy…

The advertising strategy makes sense – completely saturate the Sunday morning pregame shows so you can get the late-comers to buy in before games kick off at 1 PM ET.  There were still plenty of DraftKings and FanDuel ads during the actual games, but not to the crazy extent there was on ESPN.  And since DraftKings is the “official daily fantasy sports offering across ESPN’s platforms” it would also make sense for that relationship to be featured above and beyond your average commercial or two.

And that’s really the major takeaway here – through all the commotion about daily fantasy over the last week – both DraftKings and FanDuel have secured enormous partnerships with huge conglomerations that now have their unconditional support.  Just take a look at the list of investors for both companies including networks, leagues, owners, and individual teams.  That may be their biggest weapon against any congressional pushback.

The extent of those relationships are somewhat concerning given the lack of transparency involved.  It’s no coincidence ESPN got a daily fantasy analyst when they inked their deal with DraftKings.  And it’s clear that individual commentators are being endorsed by these companies and individual talent themselves as you’ve likely seen tweets from Glazer, Schefter, and more touting DraftKings promotions or their lineups.  At what point does the money from these daily fantasy companies start to dictate the coverage?  Or is it doing so already?  Regardless, these two companies aren’t going anywhere, so don’t be surprised if we reach a point where Super Bowl L is contested between the DraftKings Patriots and the FanDuel Packers.