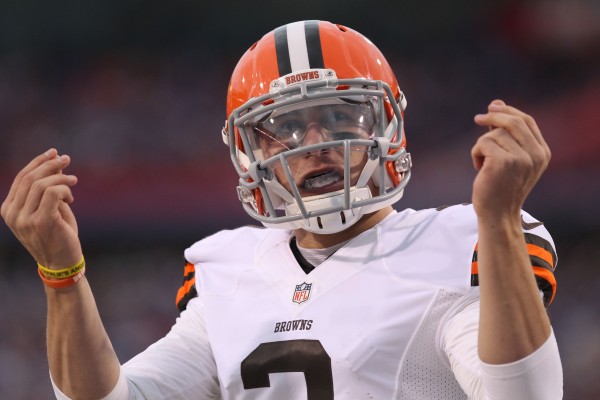 Being a sports fan isn’t easy, especially when you root for a team like the Cleveland Browns. The franchise goes way back to the AAFC in the late 1940s, when the Browns were a veritable powerhouse of American football. In the first six years in the NFL under the legendary Paul Brown, the Cleveland squad made the NFL title game every season, winning three.

The Browns continued their success into the 1960s, before everything went, well, the way things often go for Cleveland sports teams. Sure, there was that pocket of time in the late ’80s when Marty Schottenheimer was getting close to the Super Bowl, but it’s hard to consider the memories of being terrorized by John Elway in any way fond, even in comparison to the quarter century that followed, which has seen two—two—seasons with ten or more victories, and just three seasons with a winning record at all. Cleveland football has as many winning seasons since 1990 as the city went without a team in the late ’90s after the franchise left town for, of all places, Baltimore.

It can’t be easy being a Browns fan. Just ask Bill, the guy who phoned in to the “Bull and Fox Show” on 92.3 The Fan to complain about Johnny Manziel’s latest escapade. Bill is so mad he was brought to tears. (Via Yardbarker):

“When Pettine says ‘play like a Brown’ that means you are elite,” Bill said, fighting his emotions. “You’re no joke. You don’t go out with prostitutes, you don’t go drinking in bars, you don’t act like a jerk. And that’s what this guy is. He’s not a Brown. He never will be a Brown. I don’t care what the record is.”

It would be so easy to make fun of a guy who calls in to a radio show and starts crying about his football team, but again, this is Cleveland, where the years of hurt pile up. The pain is real, and the frustration at Manziel feels like a boiling point for a lot of Browns fans this week.

And yet, maybe Bill’s emotions are misplaced. When Bill says Manziel is “a drunken bum” he might be right, in an NFL context. But the rest of Bill’s claims aren’t entirely fair. Since being a member of the Browns, Manziel hasn’t been arrested once. According to USA Today’s NFL arrest database which goes back to 2001, a Browns player has been arrested 29 times, not the most by far—cross-state rival Cincinnati has seen 43 arrests, which isn’t even the most on the list—but nearly double a team like the Dallas Cowboys, which is impressive for all the wrong reasons.

Is Manziel a jerk? Probably. Is he Josh Gordon? Not yet. Is he Davone Bess, who was arrested in 2014 and pleaded no contest after assaulting a law enforcement officer in an airport? Is he Ausar Walcott, who punched a man in the head and was arrested on charges of attempted murder in 2013?

Bill talked about Manziel not ‘being a Brown’ by invoking the names of some of the best players in the history of American football. No, Manziel is not a Brown if you hold him to that standard. Good thing for Pettine and the current Browns, as dumb as Manziel has been, he’s not a Brown of the lowest caliber either. At least not yet.