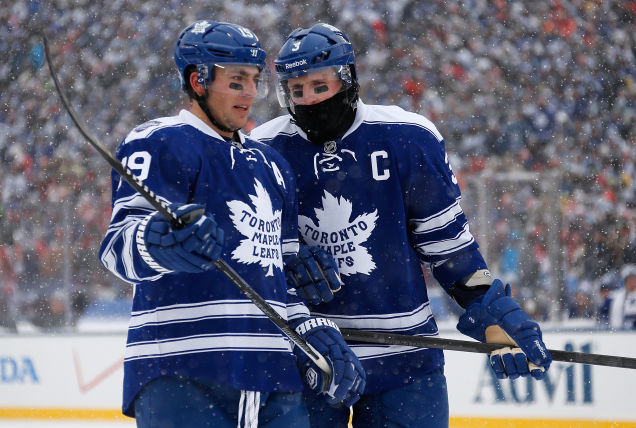 The problems with networks broadcasting average users’ tweets with a particular hashtag are numerous, but it’s rare to see them spark a potential lawsuit. That’s what’s happened in the wake of TSN’s NHL trade deadline coverage show Monday, though, which was pulling in tweets with the #TradeCentre hashtag and broadcast the tweet “I want the leafs to keep lupul solely based upon the fact that he banged phaneuf’s wife” from @Aadragna21. That tweet’s sparked angry responses towards the media in general from numerous members of the Maple Leafs, and now it’s created a lawsuit threat against both TSN and the tweet’s author from the two mentioned Leafs, Joffrey Lupul and Dion Phaneuf, as well as Phaneuf’s wife, Elisha Cuthbert (who’s now in her second NHL controversy, for those keeping track). Here’s the statement issued Tuesday evening from Vancouver-based lawyers Gall Legge Grant & Munroe LLP  (who also represented former Leafs GM Brian Burke in his 2013 lawsuit against internet commenters over similar rumours of an affair):

The following is a statement by Peter A. Gall, Q.C. of Gall Legge Grant & Munroe LLP on behalf of their clients Dion Phaneuf, his wife Elisha Cuthbert and Joffrey Lupul.

“On behalf of our clients Dion Phaneuf, his wife Elisha Cuthbert and Joffrey Lupul, we have sent a letter to TSN demanding that TSN issue a formal apology and pay a significant amount of damages to each of our clients for broadcasting a false and defamatory tweet during their trade deadline show yesterday. We are sending a similar letter to the author of the tweet, Mr. Anthony Adragna.

“It is bad enough that there are people who spend their time using social media to publish such false and malicious stories, but it is made much worse when a reputable media outlet like TSN gives broad circulation and credibility to these false stories by republishing them as TSN did.

“If TSN and Mr. Adragna do not immediately comply with the demands set out in our letters, we have instructions from our clients to immediately commence a lawsuit against them.

It will be interesting to see if this actually turns into a lawsuit. The apology shouldn’t be challenging, as both TSN and Adragna offered apologies before this statement, so that’s just a question of formatting them the way the defendants want. The “significant amount of damages” may be more of a sticking point, and if TSN elects to fight this, it could lead to some very interesting legal discussions of the responsibility networks have when it comes to filtering clearly-rebroadcast content. Merely rebroadcasting defamatory statements can still make you liable, though, and even truth isn’t an absolute defence against defamation under the strict Canadian laws on the subject.

TSN may very well elect to pay up to avoid more bad publicity here, but it’s not clear exactly would happen if this did go to court. The somewhat-similar Burke case appears to still be ongoing, although a court did allow him to serve anonymous online commenters, an early victory for him. This case is potentially better for the plaintiffs than the Burke one, as it’s a high-profile media entity involved rather than dubious message boards, and there’s one clear author of the tweet in question who’s already been identified. However, there are still questions about how much blame courts would assign to TSN in this case; rebroadcast content is one thing, but there haven’t been many cases involving displayed tweets in particular. It’s also notable that Canadian defamation laws are generally stricter than American ones, so whatever happens here may not prove a precedent south of the border.

The real takeaway from this may be that networks, companies, teams and more should be much more careful with their attempts to include content on a particular hashtag. This is far from the first case of a hashtag being hijacked; we’ve seen it happen with Fox News, Florida State and Jameis Winston, the NCAA and Mark Emmert and even the Leafs’ own 2013 Sea of Blue campaign. We’ve even seen media entities hijack hashtags, as Gawker did earlier this year, forcing Coca-Cola’s #MakeItHappy bot to tweet Hitler quotes. Basically, if you’re going to display tweets from a hashtag, you’d better have a pretty great filter. TSN clearly didn’t here, and it may wind up costing them.

(By the way, TSN parent company BCE owns 37.5 per cent of Leafs’ parent company MLSE, so these Leafs are threatening to sue one of their employers, which is sort of hilarious.)

(Update: TSN has doubled down on their apology and will offer a formal apology on-air as well during Tuesday’s Leafs-Panthers game.)