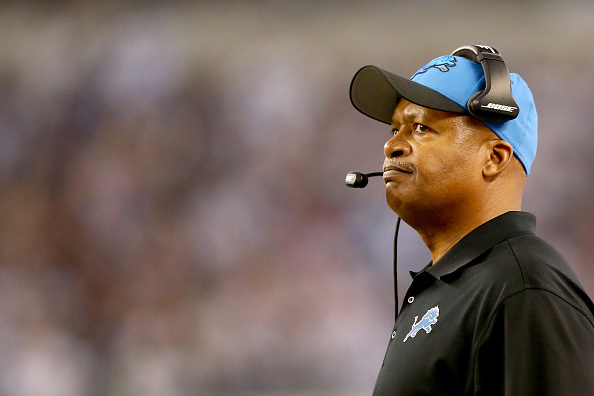 The easy reaction to Detroit Lions’ head coach Jim Caldwell’s claims that the local media is more negative than anywhere else he’s been in a 40-year coaching career is to write it off as yet another coach who misunderstands the role of the media and expects them to be unquestionably supportive cheerleaders. We’ve seen plenty of those over the years, from former Illinois football coach Tim Beckman to Cincinnati Reds’ manager Bryan Price. However, upon further reading of Caldwell’s comments, some interesting questions arise as to just why he thinks Detroit media are so negative. Here’s the key part of what he said:

“Negativity has always been here from you all’s standpoint,” Caldwell said during his Tuesday press conference. “From the media, that’s always been part of it. That’s the first thing I think you notice here. I think I call it the dungeon of doom when I walk into that room sometimes. That hasn’t changed.”

Caldwell goes on (upon questioning) to ascribe some of that to the franchise’s troubled history, to say that it’s been present during their 2014 11-5 season and playoff run as well as their current 1-7 start, and to say that the negativity doesn’t affect the team and that the discussion is healthy and good. So, this isn’t a Beckman or Price rant where he thinks the media are supposed to be only doing what he wants. It’s a more interesting discussion: are Detroit media actually more negative than the media in other cities? And how negative should media be?

A lot of the debate here centers on just what Caldwell means by “negative,” and how that plays out in practice. If he means local media are going in with a predetermined agenda to make him, the team, or particular players look bad for reasons of their own, then that’s certainly problematic from a journalism standpoint, but he hasn’t actually made those allegations. Instead, his comments seem to be more about media being skeptical and asking challenging questions. If we take Caldwell’s claim that he hasn’t seen anything like this in his 40 years of coaching at face value, the key question then may be not why Detroit media are “negative,” but why local media at his other stops haven’t been as tough.

Local media negativity is often bemoaned by fans and coaches, but the flip side, local media positivity, isn’t as often discussed. With long-running successful teams in particular, we sometimes see local media write nothing but positives about the team, not ask tough questions when they’re warranted, and even sometimes gang up on national media who dare to offer criticism. This, of course, is much less likely to come under fire from coaches, but it’s interesting that it doesn’t often come under much fire from fans or observers. In a lot of ways, a predetermined overly-positive approach carries just as many perils from a journalistic standpoint as an overly-negative one. Thus, an interesting idea to consider here is what if Caldwell’s not wrong, but merely has the wrong baseline; perhaps the skepticism he claims exists in Detroit is closer to what local media coverage should ideally be than what he’s experienced elsewhere.

Of course, the exact situation here’s difficult to evaluate from a distance. Perhaps some Detroit media really are unnecessarily critical (it’s notable that QB Matthew Stafford endorsed Caldwell’s comments), or perhaps Caldwell is merely venting frustrations after his team’s slow start. Perhaps this only feels more critical than it was at his other stops thanks to the team’s struggles. It’s also possible, though, that at least some of the idea coaches have that the local media should be supportive comes from different local media members in different markets being overly supportive. The correct balance of coverage on a beat can be tough to find, and not everyone does ever find it. Mocking Caldwell’s comments would be easy enough, and it may be deserved if he’s wrong, but it’s worth thinking about what he’s saying here. If local media really are being more critical than is deserved, that’s problematic, but if they’re bringing the proper level of skepticism and detachment, it’s worth asking why that hasn’t happened at his other stops.