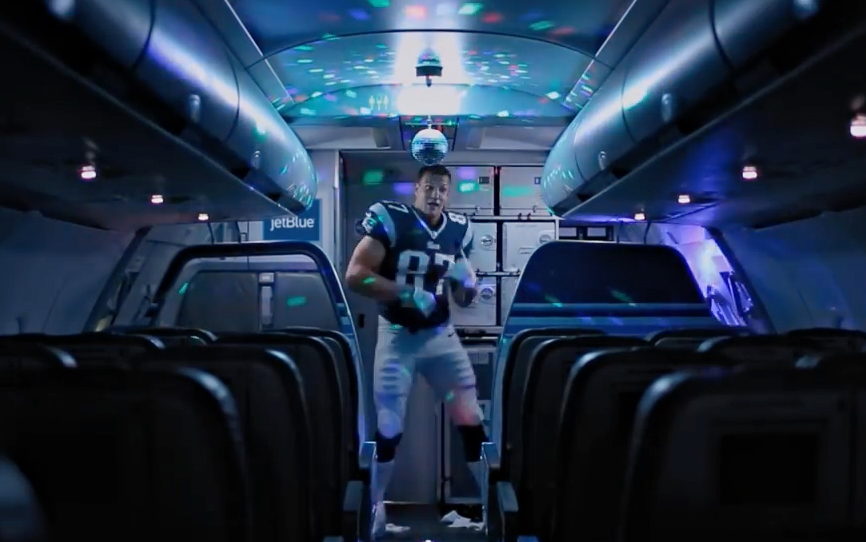 JetBlue is the official airline of the New England Patriots, so who better to promote the new partnership than everyone’s favorite New England goofball, Rob Gronkowski!

In the new ad, posted by JetBlue in advance of the Patriots victory over the New York Giants, Gronk sits across from a pilot, asking if he can fly the plane.

“You’ve gotta let me fly this plane. JetBlue is the official sponsor of the New England Patriots, and guess what? I’m on the Patriots. You’re my uncle, and you’re the chief pilot. It’s a no-brainer.”

It’s never not funny when script writers get Gronkowski to say “it’s a no-brainer.”

And…wait. Gronk’s uncle is the chief pilot for JetBlue? It seems so, as the man in the video with Gronk is Paul Hocking, Base Chief Pilot for JetBlue in the Boston area. In a recent Twitter exchange between the two, Gronk calls Hocking “my Uncle Paul.”

@RobGronkowski @JetBlue Thanks Rob for a great night! Uncle Paul

Of course Gronk’s uncle is a pilot. Pilots are super cool. My uncle works for the EPA. (I guess I’m not exactly a Hall of Fame-caliber tight end, so let’s call it even in the disappointment category.)

What’s funniest about this commercial is that Gronk ultimately agrees that instead of flying the plane, he’s cool with them giving him a disco ball and house music so he can dance totally by himself. Oh, to be a fly on the wall for the conversation behind pitching this spot.

Gronk: What about a dance party, but I’m the only one invited?

Uncle Paul: Sure, that might be a good ending to the commercial.

Gronk: We still talking about the commercial?