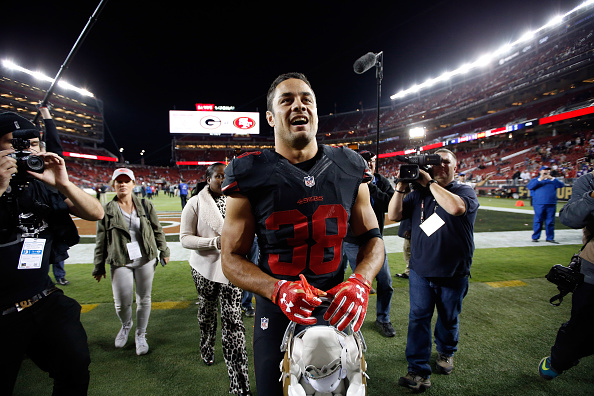 Jarryd Hayne’s debut for the 49ers wasn’t quite the fairy tale we were all hoping for.  After an electrifying preseason, Hayne muffed a punt on his first touch in regular season action.  He did rebound from there and played a role on the 49ers offense as backup to the excellent Carlos Hyde – Hayne finished with 4 carries and 1 reception for 20 total yards of offense.

Hayne’s debut not only led to an uproarious live blog from down under as Australia was glued to the action, but massive television ratings as well.  Just how popular was the 49ers-Vikings game in Australia?  The audience for Hayne’s first game was larger than the Super Bowl on ESPN Australia.

They’re minuscule viewership numbers compared with the U.S., but Jarryd Hayne’s NFL regular-season debut with the San Francisco 49ers drew a higher television audience in Australia than the Super Bowl.

Mumbrella, an Australian entertainment website, on Wednesday said Hayne’s debut drew a television audience on ESPN of 116,000, topping the record mark of 107,100 for this year’s Super Bowl.

ESPN is only available on pay television in Australia. The figures do not include those from a station which acquired the 49ers’ free-to-air rights this season.

That game getting just over 100,000 people may not seem like a huge audience by our standards stateside, but it’s quite significant given the Australian population.  Consider that last year’s NRL Grand Final scored 3.95 million people and the AFL Grand Final drew 3.51 million and those are two of the biggest sporting events in Australia.

And yes, of course Hayne’s debut should be bigger than the Super Bowl in Australia.  In his homeland, Hayne was one of the top professional athletes in the entire country.  His switching codes to American football is a sensational story that should captivate a worldwide audience.  I’d like to think if Cam Newton went to try Australian Rules Football (as he hinted at in this Gatorade ad) there would be some healthy audience numbers here.  Hopefully Hayne’s stature with the 49ers only grows and his story gets more followers in both hemispheres throughout the season.