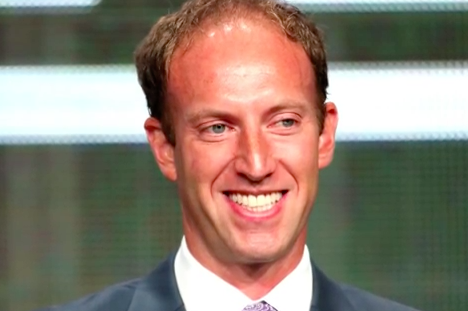 After weeks of speculation, former ESPN and NBC executive Jamie Horowitz is reportedly officially on his way to Fox Sports.

The Big Lead, Sports Business Journal, and Jim Miller have all reported in the last 24 hours that Horowitz to Fox will be announced in the coming days.  Miller says Horowitz will become a president at the network overseeing all studio programming for Fox Sports 1 and 2 and report directly to Eric Shanks.  Executive John Entz will oversee live event production.

Jamie Horowitz will get prez title for @FOXSports in new position overseeing programming, marketing & scheduling for Fox Sports 1 & 2 in LA.

John Entz gets prez title as well, with all live event production, studio, and pre/post. Both will report to directly to Eric Shanks.

Horowitz’s hire is certainly the biggest development, at least on the executive side, in the 20 month history of Fox Sports 1.  It also may be the most polarizing.  Horowitz was incredibly successful at ESPN as he built multiple ESPN shows into ratings winners.  However, he also brought the “Embrace Debate” culture that has been the scorn of those who care about the journalistic integrity of the network.  For all the positive things he did at ESPN, just remember this – Horowitz is the one responsible for bringing the plague of Skip Bayless and Stephen A. Smith debating one another five days a week upon the masses.

Fox Sports 1 clearly has the need to start developing some programming that attracts eyeballs, and Horowitz has the resume that says he can do it.  FS1 has failed to deliver a hit studio show that would tempt any large number of people from switching over from ESPN as its studio lineup has already gone over one complete makeover already.  For a network that started out with a lot of bluster about challenging ESPN right out of the gate and “The 1 for Fun,” those early ambitions have failed to materialize.  FS1 has largely been on the periphery of the daily sports discussion.  So much so that one of its lead NBA analysts has been suspended, perhaps even for more than two months, and nobody seemed to notice.

But as much as FS1 needs some sense of direction and identity as their second year comes to a close, Horowitz is searching for a reclamation project as well.  After leaving ESPN to run NBC’s Today Show, Horowitz endured one of the briefest and most disastrous executive tenures in the history of network television.  Horowitz was fired by NBC before his job officially began.  In many ways, he needs this opportunity to prove he can build a winner once again.

Fox Sports and Jamie Horowitz need each other.  But time will tell if Horowitz turns Fox Sports 1 into First Take Lite or if the network can create its own new identity that doesn’t leave sports fans and media observers wallowing in the debate-ridden mud.

UPDATE: Fox has made the Horowitz hire official. Here’s their announcement from a network presser:

Headlining this restructuring is the appointment of Jamie Horowitz to the newly created position of President, FOX Sports National Networks. Horowitz, a former ESPN and NBC News executive, oversees all programming, marketing and scheduling for FOX Sports 1 and FOX Sports 2, reporting directly to Shanks.  His responsibilities also include management and development of original programming and day-to-day operations for FOX Sports 1’s news and studio programs, including AMERICA’S PREGAME, NASCAR RACEHUB and FOX SPORTS LIVE, the channel’s flagship nightly news, highlights and commentary program.  Horowitz will be based at the Fox Network Center in Los Angeles and is scheduled to assume his new position in mid-May.

“Watching FOX Sports 1 grow and evolve over the 21 months since we launched has been exhilarating, and I’m so proud of our team for what we’ve achieved,” said Shanks.  “FOX Sports 1 is the fastest growing sports channel in the country, and we’ve seen about a 30% viewership increase overall, and 50% increase for live events, year over year.  That substantial growth has made it necessary to more clearly define our organizational structure so we’re better positioned for long-term success. Bringing an extremely creative executive like Jamie aboard to oversee our national cable channels ties everything together.”