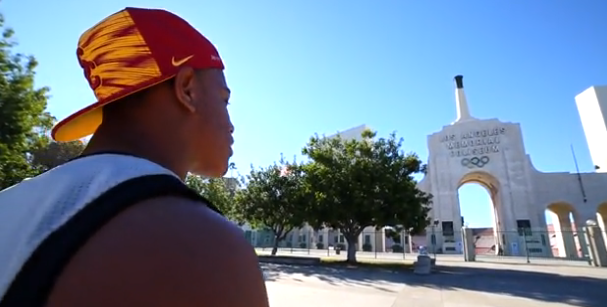 Usually recruits show up at their high school in a suit, lay out a series of hats in front of them and actually put on the hat of the school they will be attending. Many of these announcements are televised on ESPNU or other channels, and many of them are formalities, but sometimes they can be changed up a bit if a recruit decides to bring a tree to commit to Stanford or a bulldog puppy to commit to Georgia.

But Bleacher Report decided to buck the trend of these tepid, staged reveals and take committing to college in a different direction. Bleacher Report isn’t usually thought of as a go-to place for exclusive National Signing Day announcements, but they have done commitments before like Alabama quarterback signee Blake Barnett and Notre Dame quarterback signee Brandon Wimbush. This year the website — particularly the college football department — topped themselves on Wednesday with the commitment video of USC signee Iman Marshall.

“Since we started with the commitment videos, we’re trying to get away from the hats,” Mandel said. “That’s the last thing we want to do. If a kid wants to commit with us and he wants to do that, it’s fine, but we’re going to steer him away from that and come up with the most creative way possible to announce his commitment.”

After a period of discussion, Marshall decided that a music video would be his preference to commit. Marshall is an LA kid and, according to Mandel and Marc Kohn, creative director at Bleacher Report, the producers of the video wanted to capture the vibe of the city and give it a Marshall-approved soundtrack.

In the video, Marshall choses USC over LSU, UCLA, Michigan, Notre Dame and Florida State by donning a Trojans hat as he walks up to the LA Coliseum, after a two-minute montage of him running up hills and admiring how much he loves Los Angeles. He was the No. 1 ranked cornerback in the class of 2015 and helped USC nab the No. 1 recruiting class on Rivals and a few other sites.

The video was shot six weeks before National Signing Day over a three-day period and was shot with six alternate endings — one for each school other than USC. Kohn said Marshall didn’t tell anyone where he was committing until yesterday, and they had to cut six separate videos together just in case.

“He didn’t know where he was going to go six weeks ago so we shot a couple different alternate endings instead of him overlooking the Coliseum, we had him going to LAX and putting on a hat before he walked out of the car to either Baton Rouge, Tallahassee or Ann Arbor,” Kohn said. “We had every option covered.”

The video has already been viewed over 200,000 times, and provides a new way for high school players to think about theatrically announcing their college decisions.

Bleacher Report’s Chief Content Officer Rory Brown said the year-round coverage of recruiting — working together with 247Sports for rankings — has helped in the site’s growth, and National Signing Day was the culmination of that coverage.

“At B/r we’ve grown very quickly, and we feel a big part of that growth and continued growth is staying relevant and staying cool with a young audience, and we think a great way of doing that is to connect with young athletes,” Brown said. “The access is great, the stories are compelling and these are folks that aren’t getting a ton of exposure from other sports media companies so they’re very happy to work with us and we see big benefits with them.”

Marshall isn’t alone in having something more substantial than the perfunctory hat choice and press conference on Signing Day.  Snoop Dogg’s son Cordell Broadus signed with UCLA on Wednesday, and had been participating in a weekly series on ESPN called “Snoop and Son: A Dad’s Dream,” which followed his senior season and recruitment process. Snoop even joined his son on ESPNU after he committed to the Bruins.

In the same vain, Bleacher Report just launched the first episode of a series called “Paul George’s Road Back” on the return of the Indiana Pacers star, and Brown could see the site doing a similar show following a high school football player during his recruitment.

Going forward, Bleacher Report is planning to expand its year-round coverage of recruiting, and is busy thinking up for new ways to have high school players do more than just put on hats.

“I don’t think we’re going to get into the high-volume music video business anytime soon, but we know that young athletes in general are going to be a huge focus of the business going forward.” Brown said. “With Iman, this was a great piece that we’ll be able to show a lot of other athletes.”