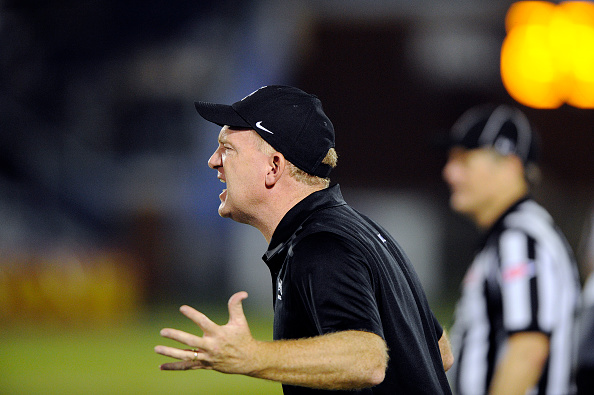 We’ve seen players getting in fights at training camps, and we’ve even seen media members trying to fight each other, but now there’s a new variation on the theme; a college football head coach trying to fight reporters. That would be Idaho’s Paul Petrino, younger brother of Bobby and owner of a 2-21 record as the Vandals’ head coach. Here’s the key part of how Michael-Shawn Dugar, the sports editor of The Moscow-Pullman Daily News, details the way Petrino confronted him Wednesday:

At the end of Wednesday’s practice, Petrino turned to the sideline and asked me and a reporter from the Lewiston Tribune, “Did you guys see enough deep balls today?” He was referring to my story in Wednesday’s paper discussing the team’s work-in-progress vertical passing attack.

I thought he was being sarcastic, so I responded accordingly.

“Yeah, there were a bunch,” the other reporter answered.

Petrino wasn’t just sarcastic; he was very much upset. He went on to immediately ban the media from today’s practice, yelling, “If all you’re going to write is negative (expletive) then none of you need to be here!”

I dismissed it as a lack of awareness, perhaps not realizing that while we were in fact on the football field, neither I nor the Tribune writer were his players, and we don’t respond to being spoken to that way.

But moments later, Petrino walked up to me and the Tribune reporter just outside the practice field and began to scream in my face, loudly informing us how many deep balls the team completed Wednesday. He then went on to chide us for our inaccurate criticisms of quarterback Matt Linehan and our lack of football knowledge, walking away saying, “You don’t even know what the (expletive) you’re talking about! Do your (expletive) job!”

Then he turned back and started to move toward me, still angrily shouting expletives about my writing and my professionalism while being physically restrained by one of his assistants, approaching me as if he had plans to do something other than verbally express his concerns.

I stood quietly, choosing not to engage with him, instead waiting for him to lower his voice and talk to me like a man. I never had the chance. He just walked away.

We’ve seen plenty of coaches get in controversies with the media before, especially at the college football level, but this Petrino one is spectacular because it checks off just about every possible box. Believing the media should be cheerleaders? Making personal attacks? Publicly swearing at media members? Going on an angry, profane tirade? Trying to physically attack a reporter? Of course, this is just Dugar’s account of the story; the Lewiston Tribune (the other paper with a reporter there he mentioned) doesn’t appear to have put anything up on it yet, and the Vandals don’t appear to have released a statement. An incorrect account of a public confrontation like this would be easy to dispute, though, so it seems like a relatively safe bet that Dugar’s report is pretty accurate.

[Update: Petrino and Idaho AD Rob Spear have denied the part about him being restrained or threatening physical violence. However, Dugar is sticking by his story.]

It’s easy to laugh about another coach losing his mind, but the rising numbers of these incidents suggest coaches don’t have a great sense of the role of the media. They may want cheerleaders who aren’t negative, but they’re not that likely to get them; even Steve Spurrier couldn’t pull that off for long. They’re going to get critical coverage at times, and someone like Petrino who’s won a grand total of two games in the entirety of his head coaching career (one in each of the last two years) should be particularly expecting that. Screaming at and trying to fight members of the media isn’t going to make things any easier for Petrino; it’s too bad he didn’t realize that before he did it.